Dedoimedo
A Place to Learn a Lot About a Lot
New 3D design: Is it a destroyer, is it a battlecruiser?

Lo and behold. Something rather interesting happened a few days ago. After an artistic pause of about six years, during which I made no new 3D models, a sudden urge to design grabbed me, and I powered SketchUp and shortly thereafter Kerkythea, and started turning the fruit of my imagination into a photorealistic product. This time, a combat ship (yet again).

The effort turned to be quite fun, in many different ways. I "relearned" my way around the two programs, and even got better along the way. I mastered new tricks in SketchUp 2017 Make edition, the last free and ultimately the best version of the program before the cloud thingie. I also re-realized that the ancient 2013 edition of Kerkythea remains the friendliest free 3D renderer around, hands down. And I also created a lovely new model, which I'm going to share now with pride and joy. 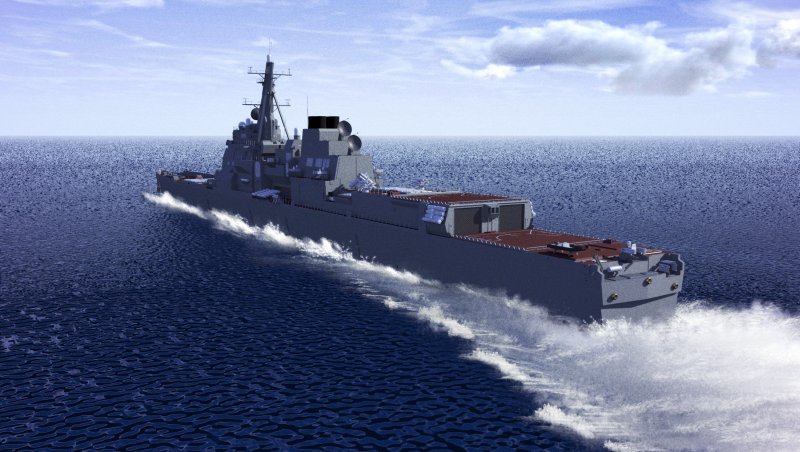 While my first ship model was mostly inspired by the French La Fayette frigate class, this one lends its looks from the American Arleigh Burke destroyer, Ticonderoga cruiser and the Russian Kirov-class battlecruiser. The model is fully 1:1 scale, measuring about 270 meters in length. It's my most complex model yet, with more than 200 unique components, used over 5,000 times.

I tried to make everything realistic. The superstructure, the weapon systems, even staircases and gunwales. The ship also comes with several zodiacs, inflatable rescue rafts, a plethora of electronic systems and antennas, and a big arsenal of weapons. 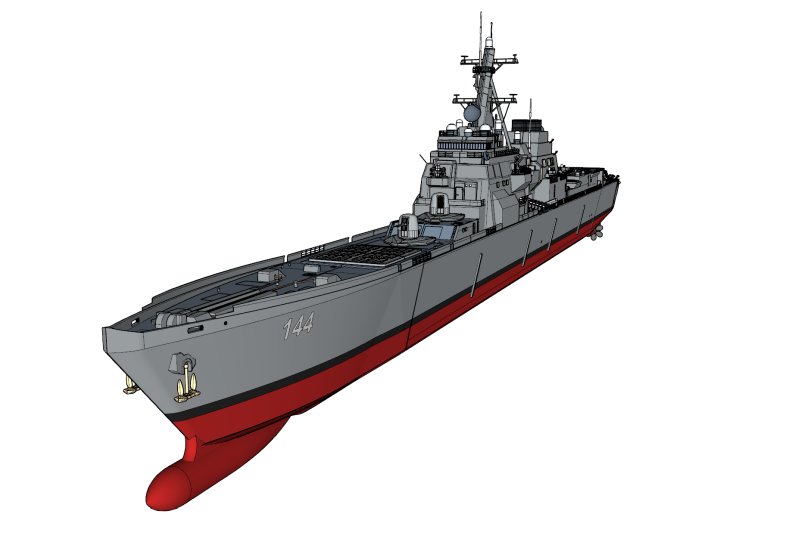 Like the rest of the model, the weapons are inspired both by the West and the East. The two twin gun turrets on the foredeck are most similar to the Russian AK-100 modules. The CIWS are also Russian in look, with two six-barrel cannon and two sextuple sealed-container missile launchers, somewhat like the Pantsir/Kashtan systems. On the other hand, the torpedo tubes and the anti-shipping missile launchers are more American in style, the latter resembling the quad Harpoon cells. At the stern, there's an a-la RBU-6000 anti-submarine rocket launcher. The vessel also has a lot of VLS, similar to the American Mk.41 module, with cells both at the fore, mid and rear decks. 64 cells front, 16 cell midships, and 32 cells in the back, just before the top level heli deck. 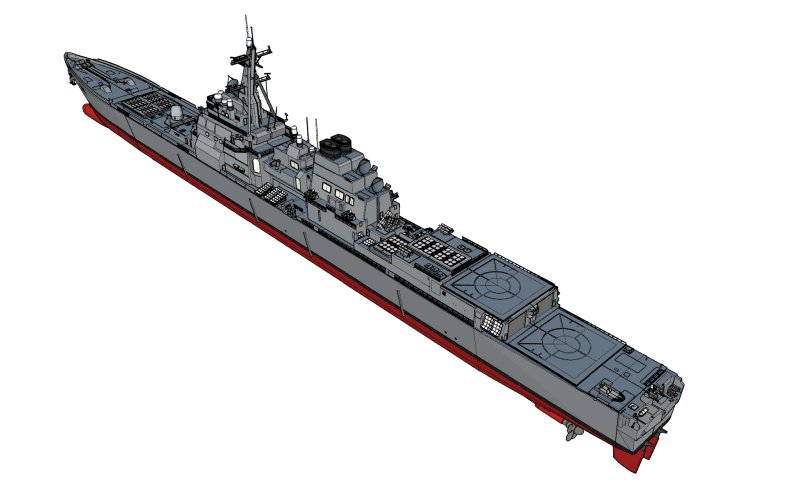 I also took extra care designing the anchors as well as the twin six-bladed propellers. To make my design less dull, I broke the sagittal symmetry by making small changes to what exists on the port and starboard sides. For instance, you will see zodiacs on the right side, but more torpedo tubes and rescue rafts on the left. Similarly, the fore CIWS is offset to the right below the command deck. The various radar dishes are also not identically placed across the longitudinal centerline. Makes for a livelier and more realistic model, methinks. 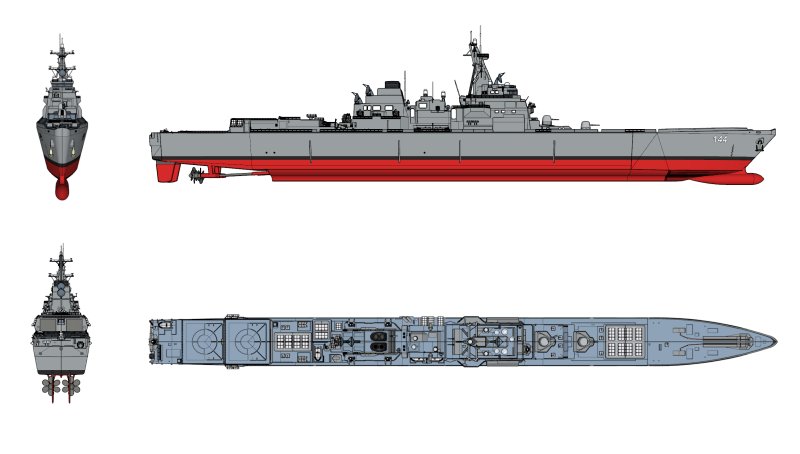 But so far, I've only shown you the SketchUp images. Let's render!

Here we go. To get the hang of it, I first did the model without the sea. Looks good, but then, there's no sense of rusty grittiness that the marine environment impairs on vessels. Still, I was quite pleased, especially since I felt this model looked much more genuine than my old ship. 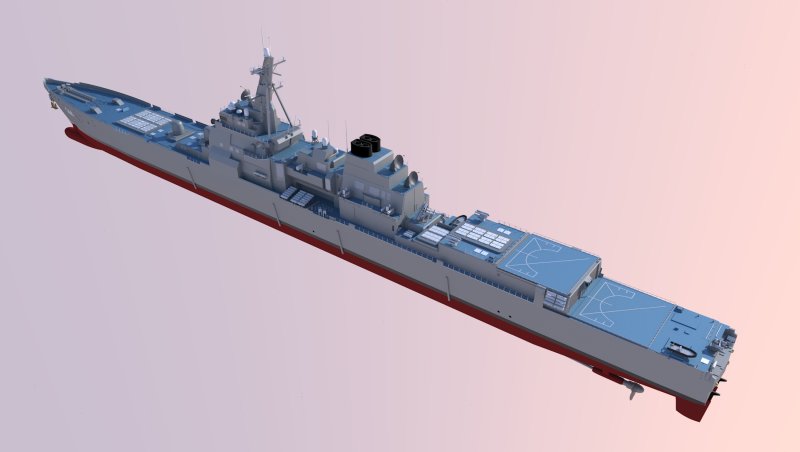 It took me a lot of time figuring out all the different materials. I spent a while fiddling with the sky and sea settings. In particular, nailing the water was tricky. What I did in the end was add several infinite planes, about 10 meters vertically apart, and had them all colored with realistic ocean hues. Then, I rendered the model with caustics, which helped create a more oily, dark feel of the ocean water compared to just your average pond. 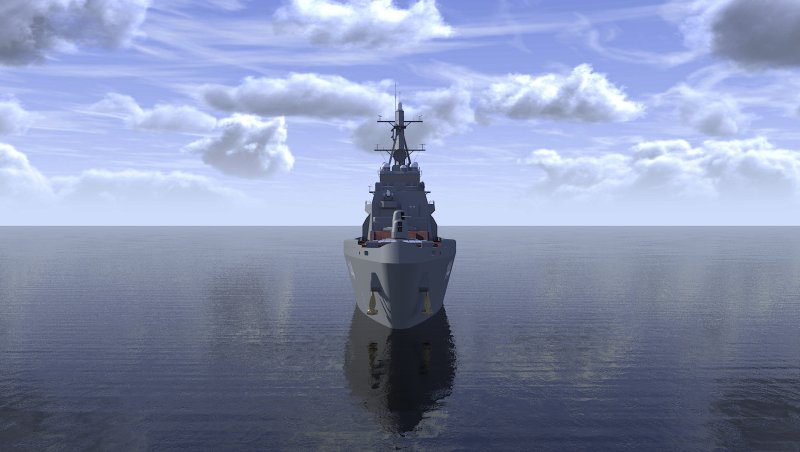 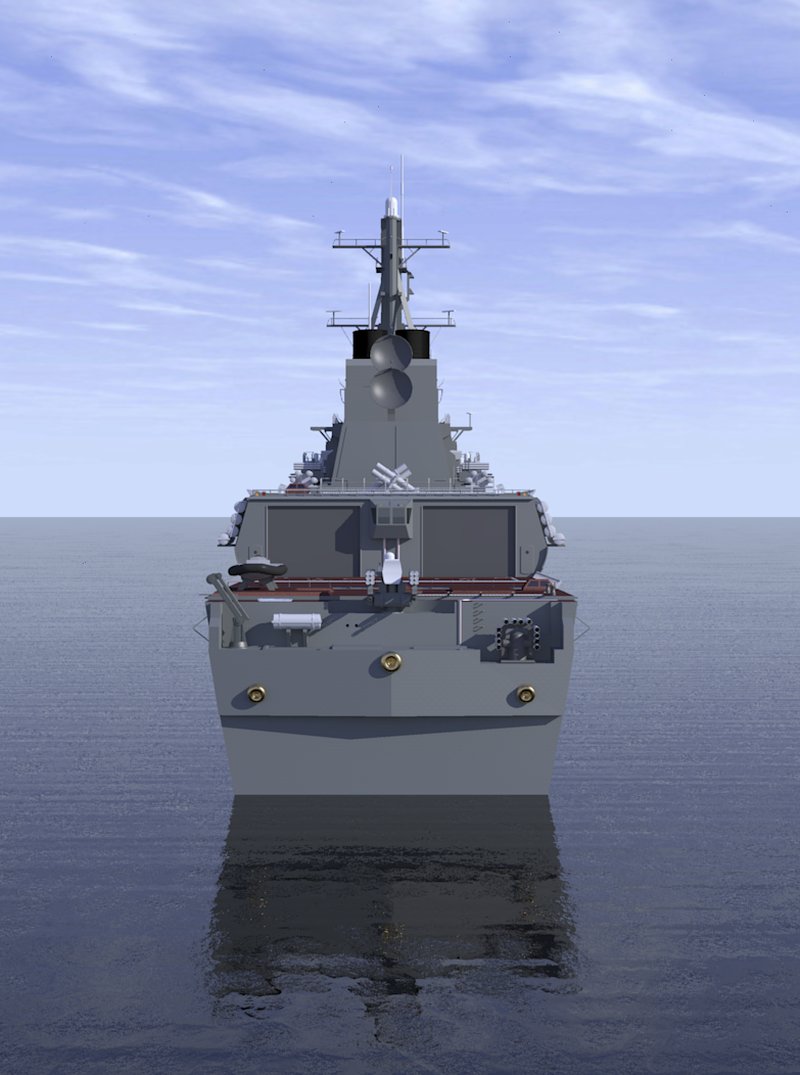 The hull materials were also quite important, because I didn't want too much shine. Muted grays and light blues, except an odd accent of color, like the brass elements at the stern, or the anchor itself. Then I tried two different deck materials - the slate blue that the Americans use and the maroon-red that the Russians use. Both seem to do the trick.

Technically speaking, there's more to be done. The model will benefit from some extra weathering. The hull paints needs scratches and salt, everything needs a bit more chip and tear and wear. But let's assume this is a freshly laid keel, so the elements haven't taken their toll just yet. I did fiddle with various post-render stuff in GIMP, but I will leave that for a separate article. 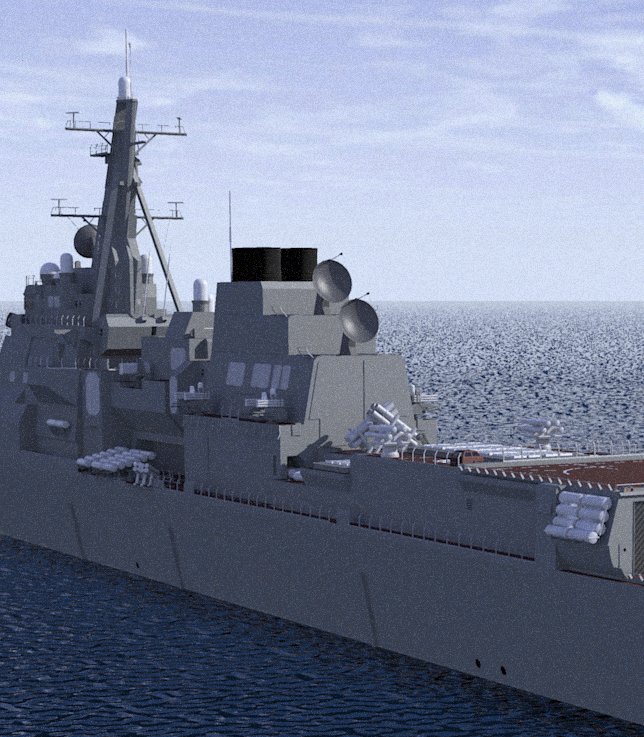 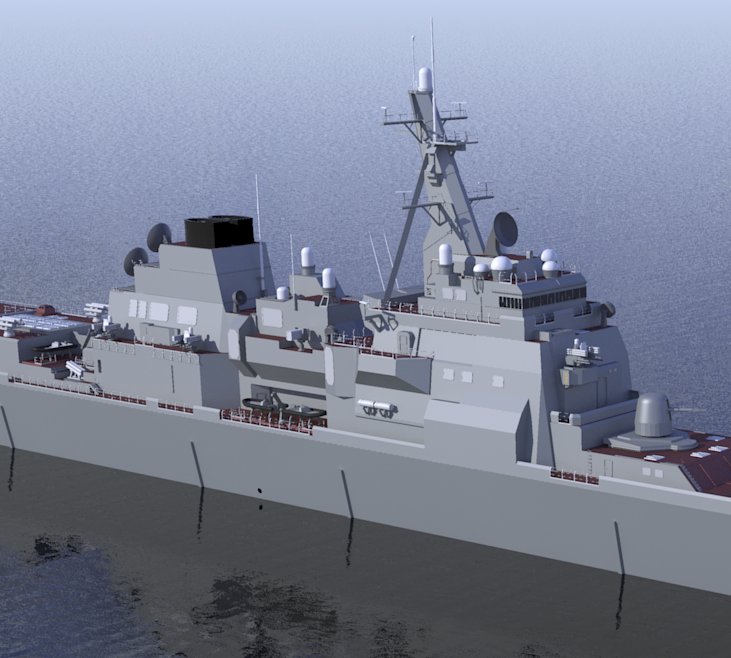 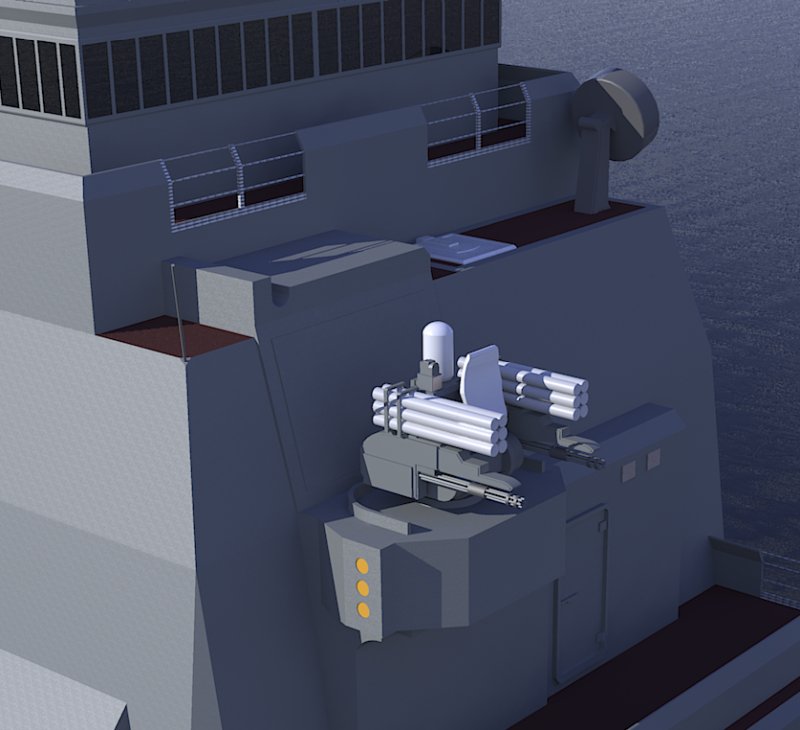 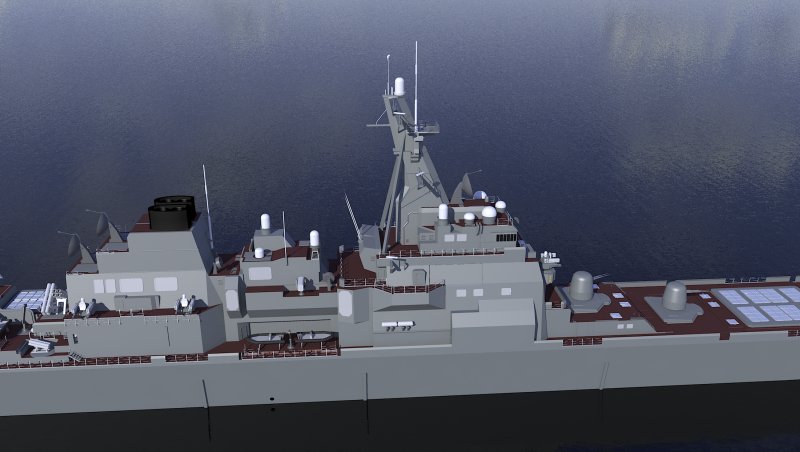 And as usual, I went on my "one more image" spree. The results of some of these endeavors are below. 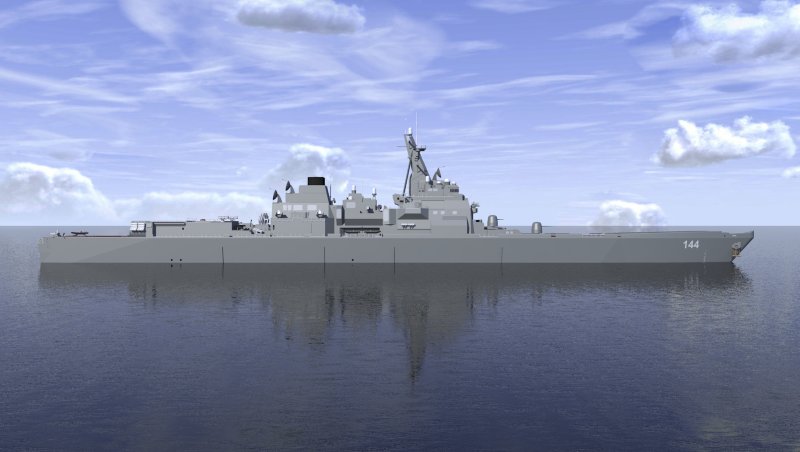 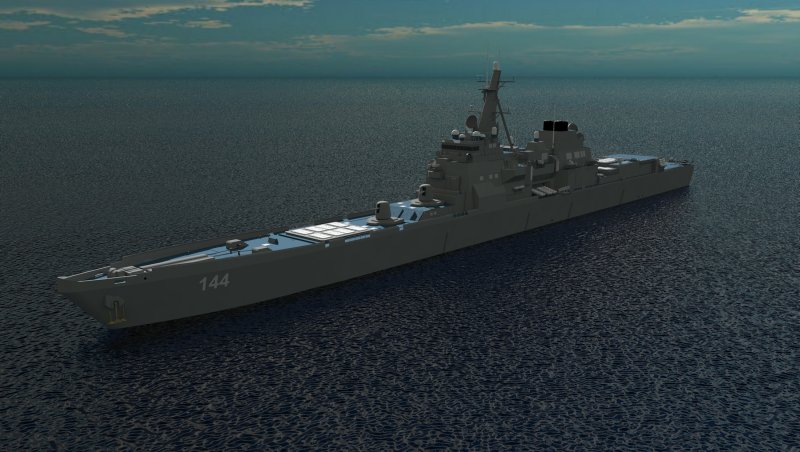 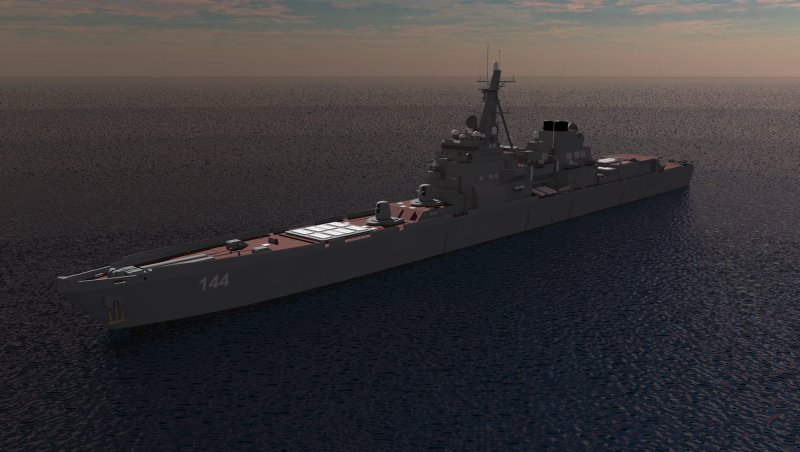 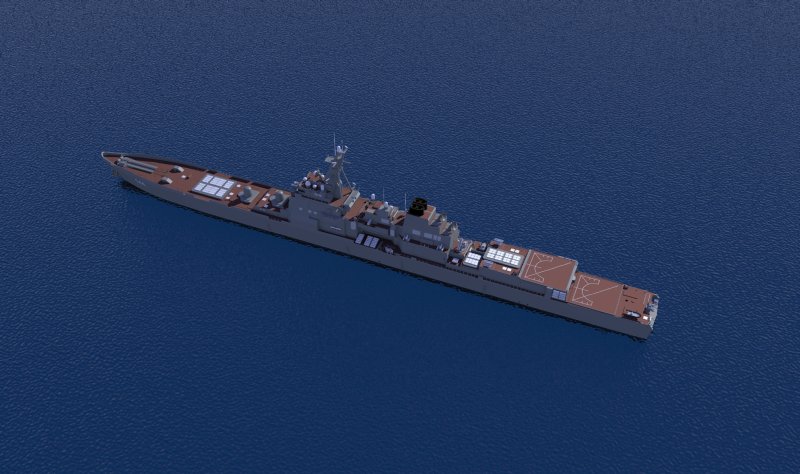 It took me about thirty odd hours of actual hands-on drawing to get this ship built, and then several more days to render it. I am quite happy, because I feel it looks much more realistic than my old frigate. I still need to invest time in sorting out the water, and add details like waves, wake and alike. But that's what makes the whole endeavor even more fun and interesting.

I hope you find this destroyer slash cruiser pleasing. And I already have ideas for some new models. Which means I'll be glued to the screen, carving out shapes from e-ice, using imagination and compute power to create ultimately unnecessary and yet so utterly satisfying concepts. Well, that would be all. If you happen to have any requests, do shoot them over, I might consider them. See you soon. Photons away.