Dedoimedo
A Place to Learn a Lot About a Lot
Working with multimedia files - Part 3: Audio - Tutorial

This is the third article on how to use and manipulate multimedia formats: Flash, video and audio. In the first article, we have concentrated on Flash files: how to download them from websites, how to convert between formats (e.g. .flv to .avi), how to extract music from Flash movies and online streams, how to convert various formats to .swf files, insert meta data into Flash video, and several more cool tricks.

In the second article, we have talked about video files: splitting and joining them, changing encoding and compression, fixing bitrate discrepancies in audio and video, recording movies, and other tasks. In this, the third article, we will manipulate audio files: convert between different music formats, like .mp3, .ogg, .wav, and others, mix sounds, compose custom pieces by splicing segments from different tracks, and more.

On top of all that, we will also talk about useful multimedia programs that can help us in our common daily tasks, namely audio and video recording software. Best of all, everything I'm going to show is free. Last but not the least, we will see examples for both Windows and Linux. So let us begin.

Playing with audio has become as common as drinking water. Maybe even more. Many of us have multi-GB collections of files, obtained legally and otherwise, on our machines. Manipulating these files has almost become a second nature.

Other users have it less easy. An enormous database of users is quite often stuck with files in curious formats, of varying quality and gain, sometimes even unable to use them properly.

In this tutorial, we will learn how to master our sound. Make all files play with equal volume whenever we launch them, split and join them into custom pieces, convert between formats, and more. These tasks are all very simple - and can be achieved by using a selection of handy, free tools.

This is one of the most common tasks you'll ever do. Let's say you have a lot of .wav files and you want to convert them to .mp3 format. Or maybe .ogg. Your needs many vary. For example, most car stereos will only play a limited, usually Windows-oriented repertoire of formats. Similarly, quite a few MP3 players will - take a deep breath - play only MP3 files.

A less obvious example is something that I had to do. In the game Operation Flashpoint, if you want to add custom sounds to custom missions created in the Mission Editor, you will have to use the OGG format. Now, this is not exactly the most obvious format for most Windows users - even though the game is Windows-based.

There are many choices available, but your best bet is Audacity, an open-source cross-platform beauty. We will use Audacity for most of the tasks here.

Audacity is unto audio what VirtualDub is unto video, at least for me. It's the first and last tool I ever use to manipulate audio files. Nothing else is needed. Now, let's see how we can extremely easily convert music file formats using it. First, we'll load a file. Then, click File and choose to export in one of the formats, like WAV, MP3 or  Ogg Vorbis. And that's the whole of magic to it! 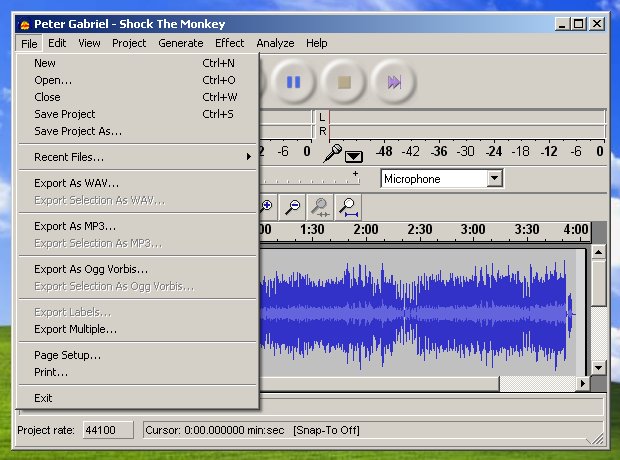 Now, by itself, Audacity does NOT support MP3 files. HOWEVER, it can very easily support them by using the LAME encoder. On Windows, download and save the file somewhere. Then, all you have to do is try to open an MP3 file for the first time. Audacity will ask you for the location of the LAME encoder. Point to the right location and Voila! Bob's your uncle!

On Linux, you'll get MP3 support if you install codecs for MP3 files. Again, you can do this by simply trying to play an MP3 file for the first time on Linux. Please check my article Playing MP3 music files in Linux - Tutorial for more details. Most distributions do not support MP3 files out of the box. Some do, like Dreamlinux.

Another application you might want to look into is MP3FS. This tool will allow you to transcode FLAC files to MP3 format on the fly when opened and read. Now, let's see a few dedicated utilities for Linux:

I have dedicated a whole article to this task. You should read Converting music file formats in Linux - Tutorial. Three very good applications are reviewed, including audioKonverter, SoundConverter and audio-convert. Both audioKonverter (KDE-based) and SoundConverter are available in numerous repositories. 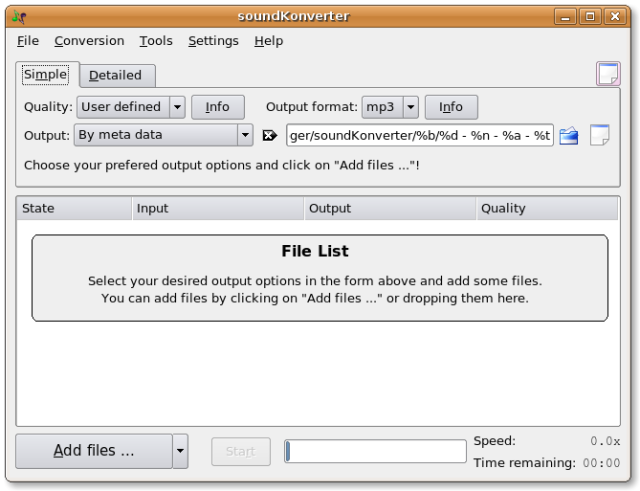 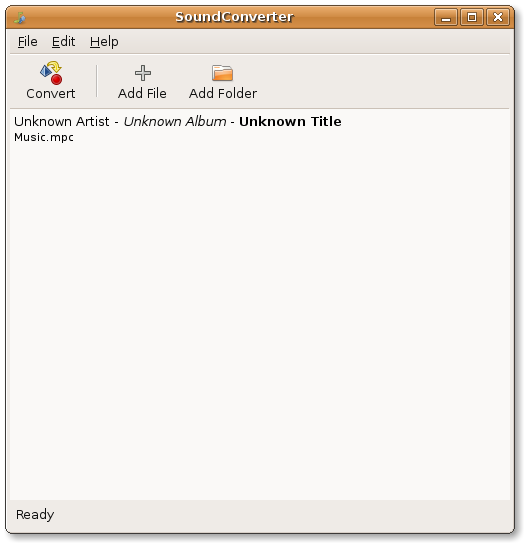 This is another common task. For example, in order to create a custom piece of music derived from the introduction movie of the game UFO: Enemy Unknown for the namesake game review, I used Audacity to cut a sample piece and then replicate it several times.

Here's how you do it. Open the file you want to edit and use the mouse cursor to select the desired range. The selected section will turn a darker shade of blue-gray (see below): 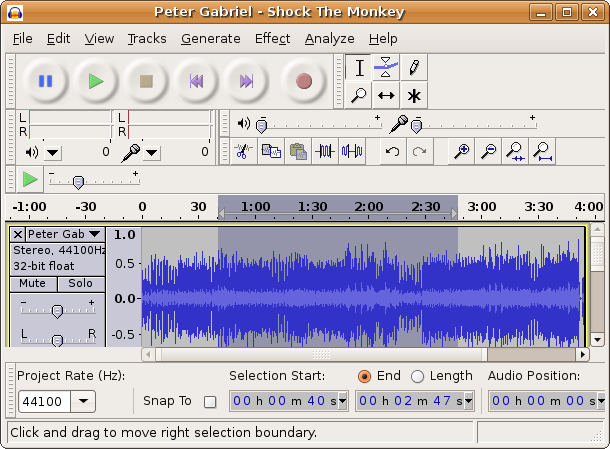 Then, click on Edit and you'll have a plenty of tasks available. You can save only the selection, copy or cut it out of the original, paste it into another piece, duplicate it, and more. 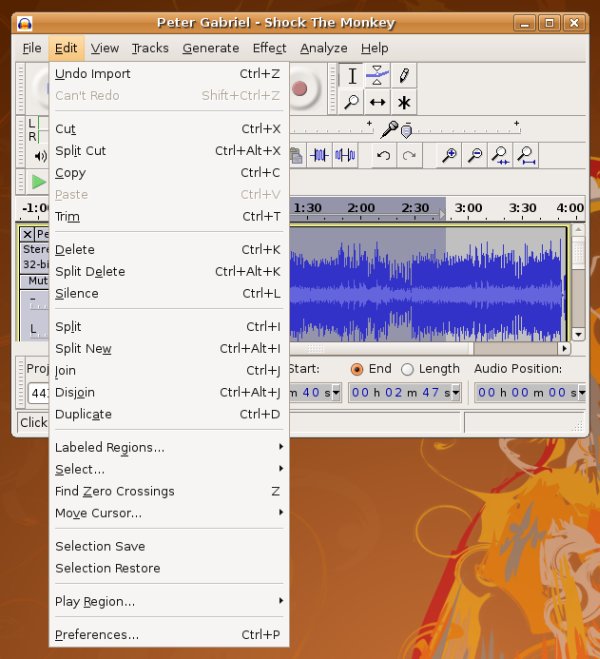 On Windows, you may also with to consider CDex for audio extracting and ripping. Now, we have already talked about these tasks in the first two articles. Please read them:

Have you noticed that some songs tend to blast your ears, while others are barely audible even when you rev the volume to the max? Well, this is a common problem. We'll solve it.

For Windows users, this is the utility you want it. Simply install it. 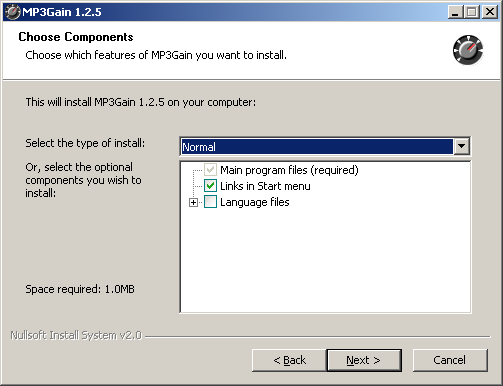 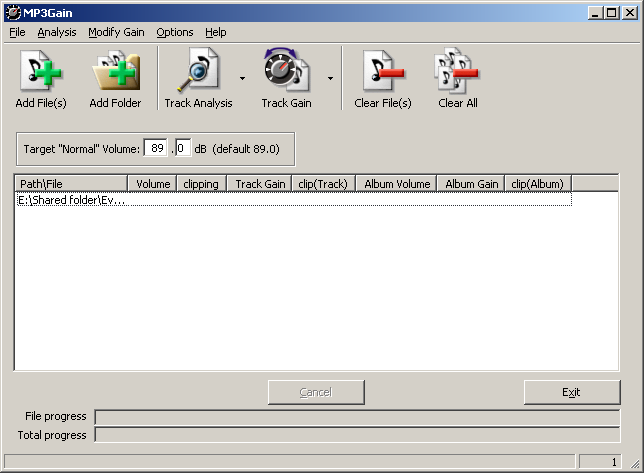 You may also want to catalog your audio files. A very hardy tool for the task is EasyTAG. You can find it bundled in Dreamlinux, a multimedia-uber friendly distro. 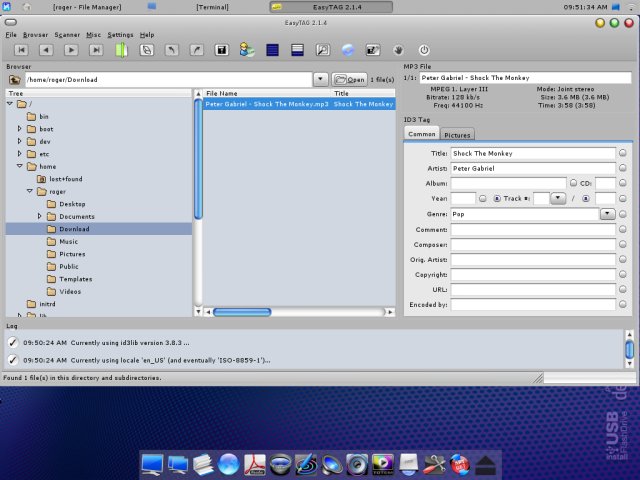 Well, from time to time, you might feel the need to hear your own voice. So you may record it. In Windows, I have found the simple built-in to suffice. Post-editing is done using Audacity and/or other tools. 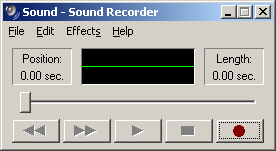 In Linux, there are numerous tools available, often coming bundled with the distro - and yet more waiting in the repositories. Sound Recorder is your most likely choice. You can also use Audacity. Or even ffmpeg. 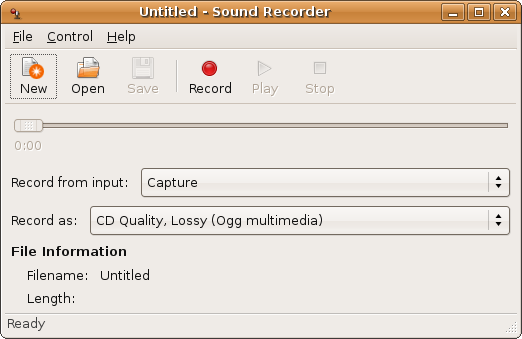 A few players to consider ...

This is more of a connoiseur's bonus, nothing to do really with editing sound, more like, enjoying it. There's a wide range of great players available, both for Windows and Linux. Here's just a tiny, tiny sampling that I think you should consider it:

We have mentioned this fine beast in the last two parts. This is definitely an excellent choice for any sort of multimedia, not just audio. It can play an astonishing array of formats, both video and audio - and as we've seen before, Flash too.

You can't go wrong with Amarok, either! It also supports most iPod devices, so if you're using Apple hardware alongside a Linux distribution, you may want to use it in lieu of iTunes, which does not ship for Linux. Amarok is quite good-looking too. Being a KDE tool by nature, it looks better on KDE desktops, naturally. 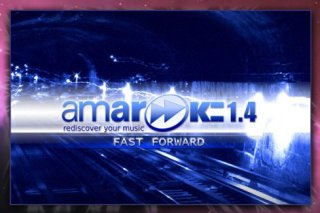 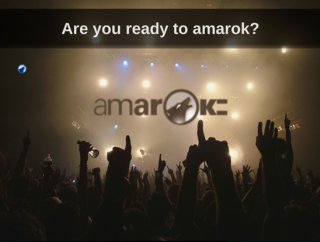 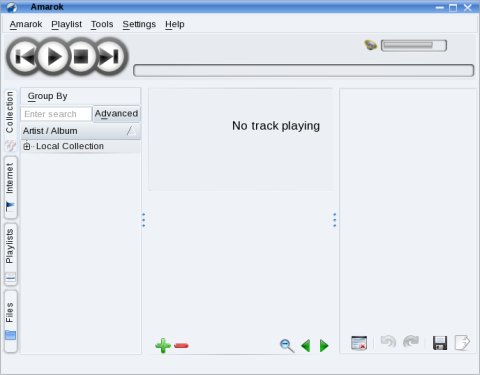 This is another great Linux music player. It works with a range of media formats and will naturally "plug in" to Web radio stations. For example, you can stream music from Last.fm directly into Rhythmbox. 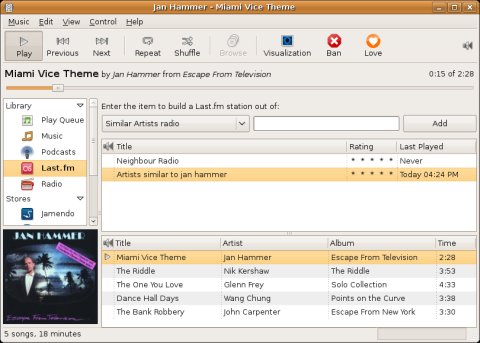 This media player will work with almost anything you throw at it, including pod casts and Youtube. And it will also play your music, DVDs and whatnot. 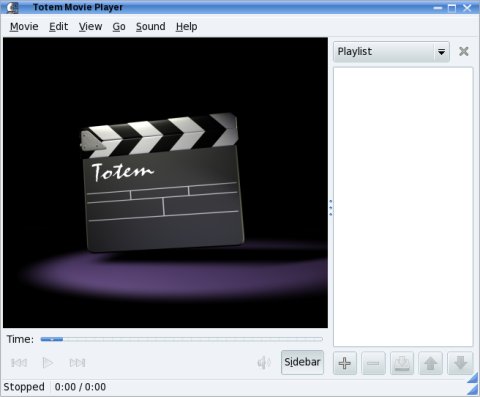 That's it for now. In the future, I will write a dedicated article reviewing several popular media players. Meanwhile, for more details about "cool" applications (including media) for Windows and Linux, please read:

Here's what we've done so far: We saw how to convert music file formats using a range of tools, including SoundConverter, audio-convert, Audacity, and others. Then, we split and joined the music files to create custom pieces. We also learned how to extract audio from Flash and Video files (ffmpeg, CDex). We then fixed gain using MP3Gain and tagged our files with EasyTAG. Finally, we recorded some audio and reviewed a number of popular players.

Working with audio is fun. You can achieve a lot by using just a few highly versatile tools. Mastering ffmpeg will take you far. If you like GUI, Audacity is unbeatable on both Windows and Linux. Then, there are perks, like fixing gain or tagging files. All in all, it's simple and easy.

Well, this concludes the third article. Stay tuned for news, updates and other, bonus tutorials, where we will talk about adding subtitles to movies, creating Flash presentations and other crazy stuff.