Dedoimedo
A Place to Learn a Lot About a Lot
Fedora 18 + Cinnamon - Not bad, more polish needed

A week back, we discussed Fedora 18 Spherical Cow with the MATE desktop environment. Overall, it worked well, but it did lack the wow effect, and certain improvements were needed in the visual polish space, as well as the application set. Mind, this was the first time we saw MATE on top of Fedora, so goblins came and pushed splinters under your fingernails.

This week, we will discuss Cinnamon. The more astute among you will surely recall my amazement at how well Fedora 17 performed when blessed with this desktop. The Beefy Miracle became a miracle and earned itself a spot in the top five charts for 2012. Well, it's time to see if the magic can be achieved once again, with Spherical Cow as the scapegoat. Oh so many animal references, it's almost animal farm.

Spicing up the desktop

I decided to reuse my old account, which means the old Cinnamon setup from Fedora 17. There seemed to be no issues, and the desktop came fine, but then I noticed some rather weird icons in the system area. They had a distinct Android slash Moblin type of look, and I was wondering if this were not some kind of a change in a more recent version of Cinnamon.

This desktop environment has really matured, and its settings menu offers a wealth of tweaks for the enterpreneuring user. You can change your wallpaper, applets, extensions, the desktop and window behavior, hot corners, and more. While playing with the different options, I managed to restore the system area to its normal size, so this turns out to be a glitch, and a weird one, too.

And so we get this lovely thing, like in Beefy Miracle:

If you play music, then the system integration works splendidly well, however having the Amarok icon there is unneeded since the volume icon doubles as a shortcut for the media player. Oh, that icon looks like Sauron's Eye, no, sort of? And the desktop effects add another layer of suave to your experience.

Now don't you think it's odd that this very SAME distro refused to run KDE desktop effects, but it has no problems whatsoever with Cinnamon. Oh, the peculiarities of the Linux ecosystem.

Not all was dandy. Cinnamon is basically designed to run on top of the Gnome shell thingie, so when you power up some of the arcane settings menus, you end up with too much color. Or inconsistency, if you want to call it that.

First, you get a very distinct Ubuntu, or should I say, Gnome 3 like system settings menu, which has no 5px transparent border, unlike the native Cinnamon applications. Then, there's yet another system settings menu, which looks like the old Gnome Control Panel, but not quite, without any border, either, and let us not even talk about the KDE stuff. Each one of these menus offers you its own printing tool. And then, all this brings us to printing. 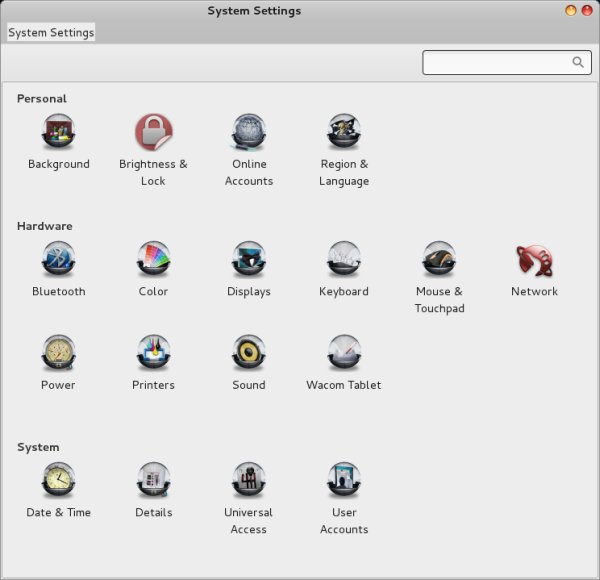 If you fire up the printer tool from either of the two menus above, you will get the somewhat Gnome-like applet, which does not work and cannot detect any network printers. But its state of brokenness is not a new thing, and we have discussed this at length many times in the past.

However, if you fire up the equivalent KDE utility, then it is going to work without any problems, and you will find the Samba printers on the Windows network over the Wireless connection. Such is the way of the world. Crazy.

My feeling is that Fedora 18 Spherical Cow has a Cinnamon desktop that is that much less well integrated than its predecessor. It performed a little better than MATE, and it offered a more streamlined, more beautiful experience, but there's just too much overlap and inconsistency. The printing tool is the best example. Reusing the account and the settings also did its share of adding chaos to the system, with the notification area all jumbled.

Overall, I very much like Cinnamon, and it does add a breath of fresh, minty [sic] air to Fedora. But there's more work to be done, mostly ironing out the intrinsic Fedora beta quality quirks, polishing out any duplicities and making sure there's a single unified interface. This is the problem with post-install additions of desktop interfaces, since you end up with all the tools from previous sessions. But then, perhaps those duplicate applets out to be locked, so they won't run or cause problems, or alternatively stick with the system defaults. Whichever the choice, it proves that desktop integration is a tricky business, usually an all or nothing affair, and that you can't just casually add extras.

Fedora 18 Spherical Cow with Cinnamon feels like an improvement over its baseline, be it Gnome or KDE, especially Gnome. But to make a seamless, perfect match, the developers need to work on stitching up the little bugs and polishing the rough edges. Then, it will really shine, combining modern and stylish in an unbeatable package. Well, we will see what happens. I shall definitely be keeping an eye on this one.