Dedoimedo
A Place to Learn a Lot About a Lot
Using iPhone 6, six months down the road

If you recall, several months ago, someone gave me an iPhone, for free. Never having owned an Apple device before, I thought it would be a good exercise slash social experiment to continue using the phone for a while, to see what gives.

Now, my initial response wasn't too favorable. The hardware is really good, the camera is quite all right, but the ecosystem is way too shiny, too restrictive for my taste. Sure, some people may find joy and bliss in this closely tailored world. Not me. And so, let's see if and how my impression has changed after about six months of using the device as my secondary brick of metal and plastic. Life in plastik, das fantastik. Ahem.

Day to day use

I won't go into every little detail, so let's have the highlights. One, sometimes when the reception would get really low, the mobile network would stall and then not recover after going back into the areas with good coverage, necessitating a reboot. Using the airplane mode would not help. I also had Safari hang once or twice. In other words, it wasn't a perfect, rock-solid record. Just in comparison, my Nokia Lumia never once crashed.

Two, the battery is decent. On average, even with some light to moderate use, the phone would survive for about three days in between rejuicing. This is a laughable achievement compared to my Nokia E6, but better than most Androids I've used. As far as refueling your phone goes, when you do it with the USB cable, you must trust this and that computer too often. Perhaps iPhone does not remember or maybe it limits the number of devices it will permanently trust, because I pretty much had to approve every single device, every time. The wall charger is a different thing. The Euro and US ones are handy and easy to grip. The UK one has a wonky aspect ratio and a funny triangular shape, and it is very difficult to extract, as you only have about 1cm of actual circumference to work with. Greasy fingers, slippery plastic, much grief.

Three, the camera is fairly impressive for a tiny device strapped to the back of the slippery silver case. It does not have any fancy optics, it's all digital, and in the low-light or glaring-light conditions, the images come out grainy or over-exposed, while zooming in merely changes the number of pixels presented to you, resulting in blurred photos. So you're better off with whatever Mother Nature giveth. Or if the object of your interest is too small, come closer. Photo burst works well, even up to 400-500 images, although it slows down the moment you deplete the phone memory and start writing data to the solid-state storage. Likewise, the 250FPS slow-mo thingie also works fine. All in all, it's an excellent opportunistic camera, and you can actually save some of the photos after you download them to your computer and check them on a big screen. The wide angle also helps capture more real estate. Again, for a phone, it's bloody good.

Fourth, the Store and everything i-prefixed remains completely boring. I found no desire and no interest to dabble in the cloud offering, music and video, or the rest of the stuff offered. I did download one or two applications, and that's about it. Surprisingly, the Health app, which I've hidden away, is useful if you want to know how much you may have walked in a day. It is relatively accurate. Other than that, there's nothing the iPhone 6 did for me that somehow transformed my life in a magical, mindblowing way.

There was an upgrade

One of the things that happened in the last months, I had an iOS 9 upgrade offered, which weighed 1.1 GB, and mandates a Wi-Fi connection to download and install. What if you don't have an Internet connection, and your phone is your only net-able device? Speaks volumes about the mindset behind this idea.

However, this one worked out fine. The whole thing completed in about 20 minutes. The latest version of iOS looks a tad better than before, with larger icons and symbols. However, there's a bit too much flatness in the new design.

On one hand, the all too colorful kitsch has been reduced, but then there's an Android-inspired toyishness about the new looks. Moreover, the ambiguous lowercase-uppercase keyboard problem has finally been rectified. The battery life is supposed to be better now, but I can't really see any obvious advantages yet. This mandates a longer, more thorough testing. 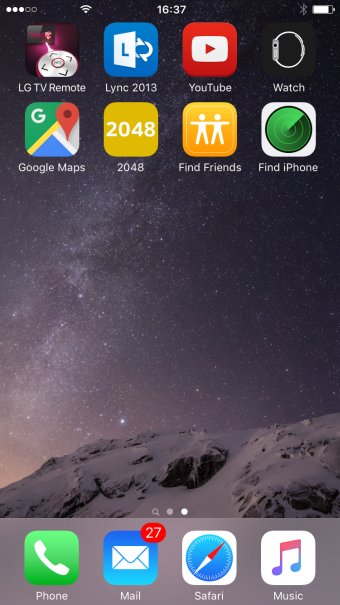 On the other, I did not like the push for online integration, although it is easy to decline slash skip. But I have already done my setup once, there's absolutely no reason to offer all these bits and pieces again. I know what I want, and the foot-in-the-door sales tactics are annoying. Anyhow, if you are not inclined to store your stuff in iCloud and use iWallet, then you don't have to, and it's all good. However, you do get several new default applications that you cannot delete, so you must hide them. This also includes the iWatch software, which tells you what the company wants or expects or hopes you will do. Thank you. My life is now truly complete. The only thing missing is something measuring my blood pressure while I'm squeezing my morning number two. Sometimes I wonder what planet I came from, as I gaze in mild wonder and disgust at these ultra-shiny pseudo-post-modernistic trends.

Speaking of trends, iCloud, backup and a few other features were turned on after the upgrade, even though I've explicitly marked them off. Morons, don't pull this IQ 70 crap on me, please. Respect my intelligence. If I've marked something a certain way before doing the upgrade, then the settings should stay that way. Forevar. Thank you.

Then, some of the old problems still persist. The device occasionally loses network connection in low-reception areas, and cannot recover until after a reboot. This mostly happens when there's flaky, intermittent coverage. Furthermore, the device sometimes loses its touch-ability and requires a hard reset. The only thing that works is the lock screen, but nothing else responds to touch. Happens about once every few days.

Last but not the least, the Game Center is far more aggressive, and it pops up every now and then, reminding me to sign in, which I don't want to do, or presenting me with silly ads for random game titles, which I found stupid. The one and only game app I use, the little 2048 math puzzle, now offers ads at the bottom of its screen, something I've never seen before. I almost had it removed, but killing mobile data for the app does the trick. Still, this is a regression. Not a positive trend. If my work flows is ever disturbed by anything I did not explicitly ask for, then I will purposefully resist it any way I can. Once upon a time, I may even have considered signing into the Game Center. Now I'm never ever going to do that. NEVER. On principle.

Some of you may start phrasing your objections, as if somehow I'm missing the bigger picture and not seeing the advantages and/or the convenience of the offered products and services. For instance, Apple Pay. I can use it instead of my credit card. Why? I can use my credit card. What's the big deal? Why put your credit card info into another database? Isn't your bank good enough?

It comes down to actual life needs. How people are living their lives, and how their habits and needs are met by technology. Sure, you can't miss something you've never had, and it's quite possible that people who are not using XYZ products are not enjoying some of the benefits that the XYZ products may have. Perhaps.

However, if you already have all your needs met, then apart from curiosity, there's really no incentive to try these new things. Yes, once you start using them, they become a part of your daily routine, and giving up on them is difficult. And it may change the way you function, coinciding technology with what people perceive as efficiency, whereas it's only a shift in trends and/or habits and/or patterns. Going back to the money example, someone not using Apple Pay isn't any less efficient. Just using a different medium. Possibly a cool medium. A buzzworthy medium. And they may be able to do this crazy thing, which they don't really want or need, but just because it's possible, they might. In the long run, it makes no difference.

So yes, potentially I could use everything Apple offers. But that means doing things that I do not need. I might like them if I try them, yes. Ultimately, though, my life will not be any faster or more efficient. Because technology is irrelevant. If you don't quite understand what I'm saying here, please stop reading this article. You're wasting your time, and mine.

And so we've reached the end of the road. Six months later, my initial evaluation remains unchanged. On the hardware side, iPhone 6 is an impressive product. It offers a really tight package. Yes, there are some other excellent models by rival companies, with impressive optics and good battery life. I do not dispute that. It's just this one gives you that extra pinch of magical salt to make you feel special. Again, on the hardware side only.

Software wise, Windows Phone remains the best offering, by a league. The way iPhone is designed, it's like a musical piece. If you mess up some of the notes, the performance will be off. And so it is. Unless you are willing to enjoy all the instruments in the orchestra, then you will not really like the end result. Because I am not inclined to partake in the finely tuned and governed iPhone mentality, I am unable to connect to what it's supposed to be, and consequently, I find the software side of things to be irrelevant to my needs.

Well, it does have one big advantage. It's a really good mobile camera, which begs the question, why not invest the money and buy a proper camera. You will have superior optics, without the phone functionality. But then, if you are not into Apple aesthetics and its upper-class, West Coast approach to consumerism, you really don't need an iPhone. There's no disputing that iPhone 6 has its quality. For me, it's as useful as snow in Jamaica. Except the camera. So, it's a nice gift. Only not one I can appreciate.