Dedoimedo
A Place to Learn a Lot About a Lot
KaOS 2017.11 review - Chaotic and unfriendly

It has been two years since I last tested KaOS Linux. My last impression was fairly negative, not having been able to complete the installation. All in all, the distro had a lot of beta-quality qualities, and it did not feel robust enough. Two years later, we are testing again.

I decided to deploy KaOS on my Nvidia-powered LG RD510 laptop rather than the newer Lenovo G50. Even though, the IdeaPad is back in action after I successfully managed to fix its read-only NVRAM, I was hesitant trying KaOS in this setup, both because it did not perform back then, and also because I didn't want to risk the Lenovo box going AWOL that quickly after having been healed. It's not that there's anything particularly sinister about KaOS, it's just that I feel like the effort should warrant extra risk, and so far, KaOS has not proven itself. So we start humble, and if it delivers, we test on the Lenovo, too.

The boot menu has the option to start with non-free Nvidia drivers, and I did choose it. After a brief torrent of text messages, there was the graphics driver splash, faster than I'd expected it, and after that, I was logged into a bright, gray-white Plasma desktop. The last part did take a while loading. 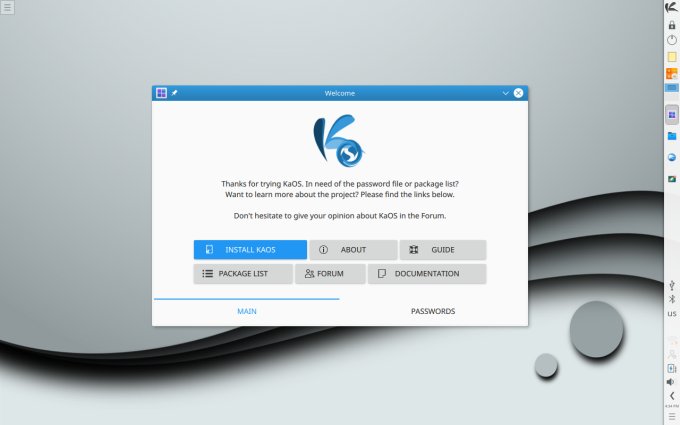 The desktop comes with a rather odd arrangement - the panel is located on the right side. This goes against the convention of the left-to-right language reading hierarchy logic. The same layout also affects Dolphin, and the magnitude of the visual annoyance was such that I almost stopped testing. The panel is relatively easy to solve, but the file manager is just horrible. I really do not understand the ergonomic considerations.

Shame, because the default theme is nice - the set of decorations and icons and such. Well, except fonts. Horrible low contrast stuff all over the place, with weak, pale gray text color that makes your eyes water. Again, I do not understand the ergonomics chosen for the desktop. 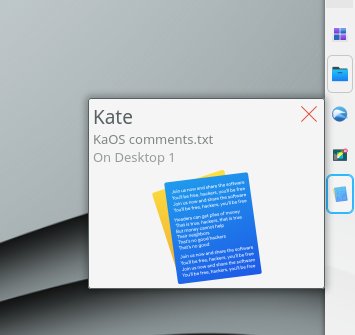 Well, it didn't start all too well. No Samba, to begin with, not at all, and this always pisses me off. No Samba printing, either. But then, after logging out and logging back in - as I was playing with the theme and wanted to make certain adjustments and they did not seem to catch on without starting a new session - the Wireless was down and did not auto-reconnect. There were actually quite a few complaints, including SDDM Greeter not being writable, Virtualbox service not running, the aforementioned Wireless adapter being down and more noise. I guess the Wireless part has to do with KDEWallet and whatnot.

But I really spent little time testing the live session, because I just couldn't handle the defaults. So I fired the installer wizard. It's very similar to the one we saw two years back, and it still makes some of the same assumptions and questions, including a few rather dangerous and even plain wrong statements. 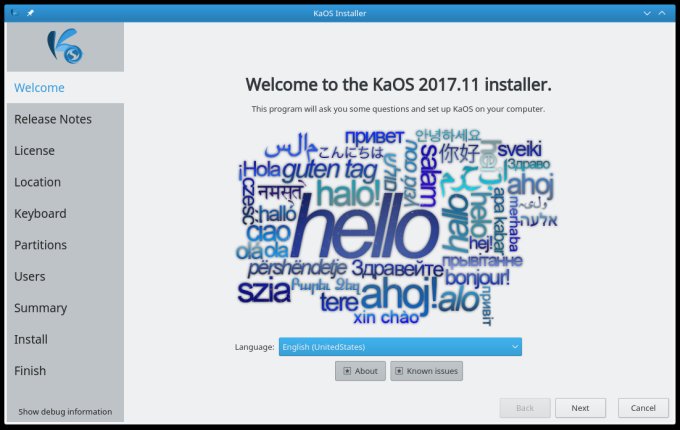 It did ask me about Nvidia again - except I DID have a card on this box, so it was actually relevant this time. All right, checkbox - it's still placed in an ugly way, but okay, never mind. 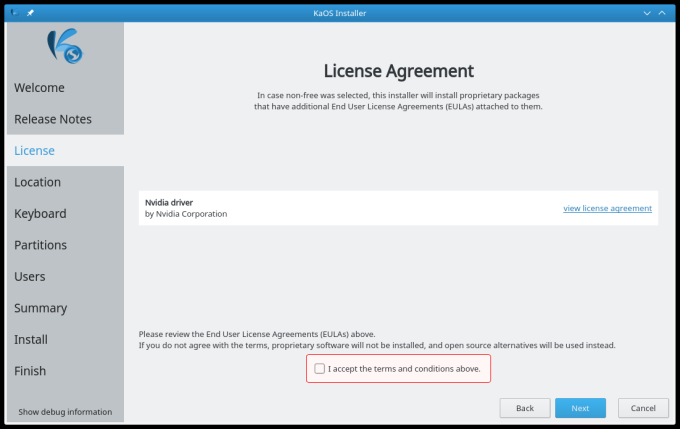 I was annoyed by the timezone & language config. I selected English (US) on the first screen, but it still defaulted to a different EN locale based on the timezone. You can test this. Try Canada, South Africa or Australia, and you will get a "different" language. But then, the keyboard was set correctly. Why.

The partitioner is the real baddie here. First, it tells you a 512MB partition is a must for a UEFI installer. One, this is not a UEFI install, why tell me. Second, this is absolutely incorrect. The EFI partition can be of any which side as long as it's big enough to contain the EFI data. For instance, on my Lenovo G50, it's 256 MB in size, and it blithely hosts almost a dozen entries there, with less than 50% of the space taken.

Then, after I selected partitions as I wanted, it told me to use GPT. No, GPT is NOT the best option for all systems, for many reasons. One, it might not be supported in BIOS. Two, there's a living setup on the disk, and changing/converting the partition table type might lead to data corruption. Three, the explanation on how to achieve this is quite vague. Four, why.

After that, I started the installation, and it took about an hour to complete. The dual-boot configuration was properly set up. You have some nice slides to enjoy while you wait. 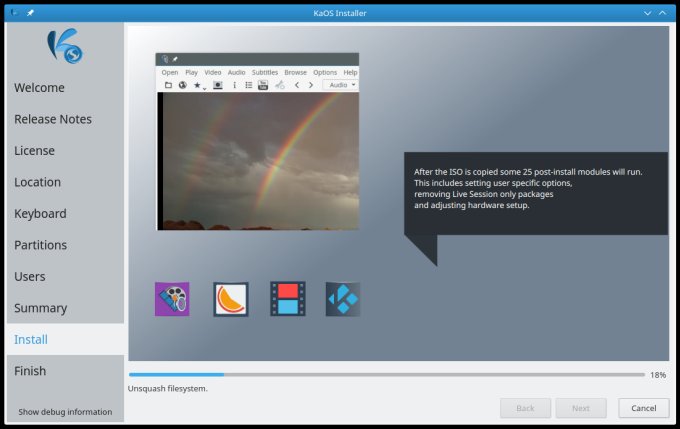 The Big Bang ... something

No settings were ported over from the live session. In the installed system I faced the same UI challenges. I deleted the dolphinrc configuration file, but it still looked somewhat odd. Much better than the right-aligned thingie, mind, just not good enough. 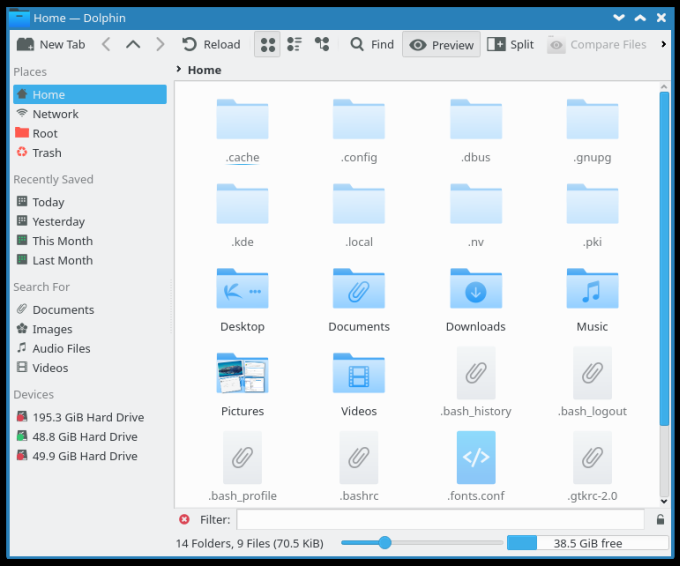 If I recall correctly, Kaptan comes from Pardus. It's a desktop configuration tool, and it lets you sort out many visual and functional aspects of your desktop environment in a nice, easy way. You can also change the theme, the icons, everything. In fact, the desktop theme step highlights just how bad the default text contrast is. 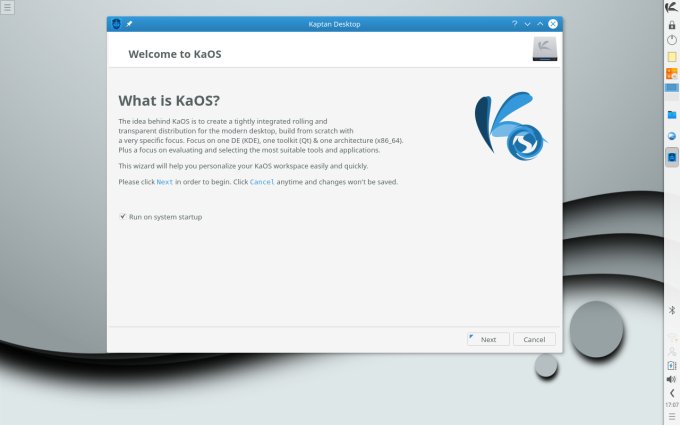 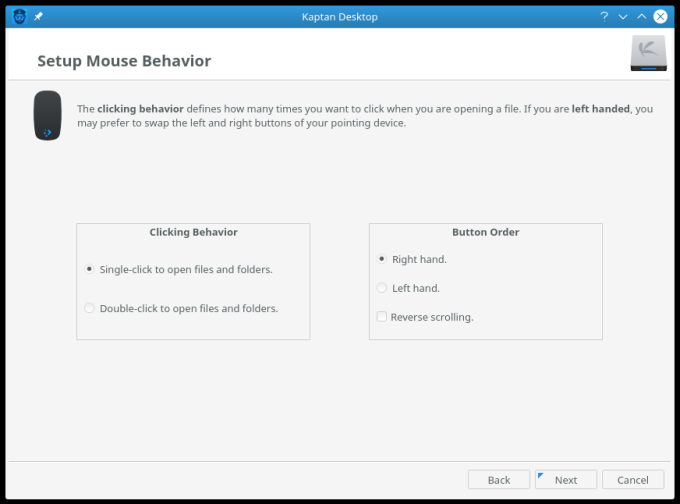 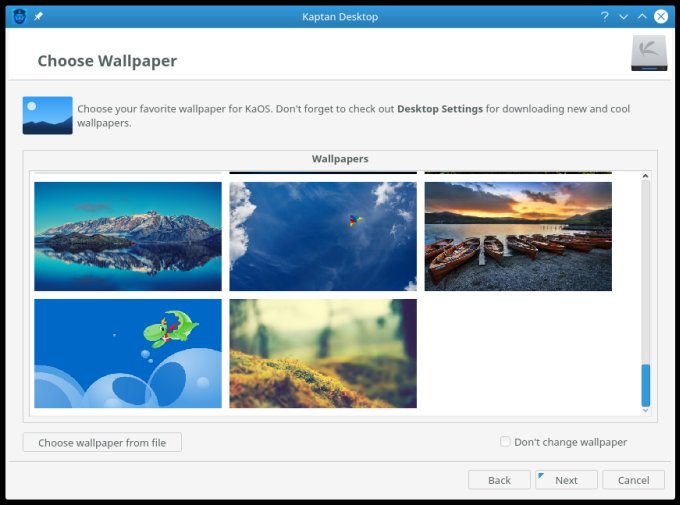 Except ... it did not work. No matter what settings I selected, they were not reflected in the final setup. The theme, the icons, even the desktop background, they all remained the same. Something was quite buggy here.

So, DIY. I invested some more futile energy trying to get things into order. I played with colors, themes, whatever, and KaOS 2017.11 just refused to make my changes visible on the fly. I had to log out and log back in each time. And each time, the Wireless would be down, and I had to manually start it. No KDEWallet prompt whatsoever. So depressing.

The text in the menu is barely visible.

Using the Breeze color set, the fonts looked slightly better but still rather weak and pale, and my head was hurting fiercely. It's amazing how much variation there can be between distros, even seemingly identical ones, all using the same Plasma environment. KaOS was giving me one of the worst experiences so far.

But the ergonomic issues do not end there. The Konsole profile gives you a transparent background, and while this is pretty, it's not very useful. The file manager remains a sore point. It's almost what you need, but not quite. 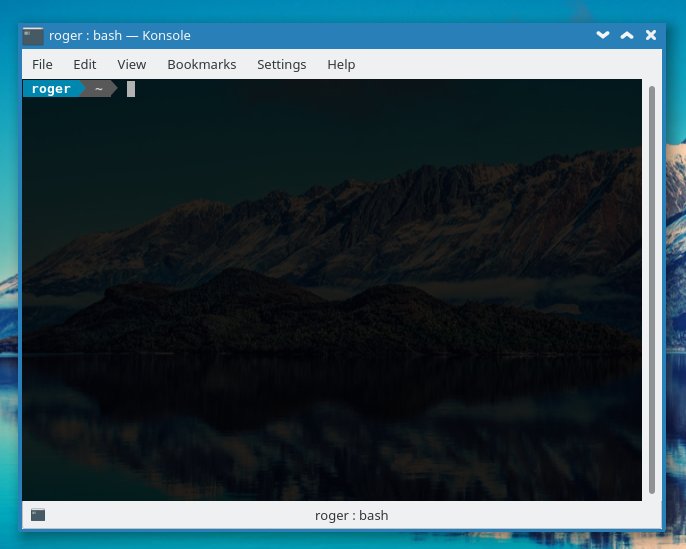 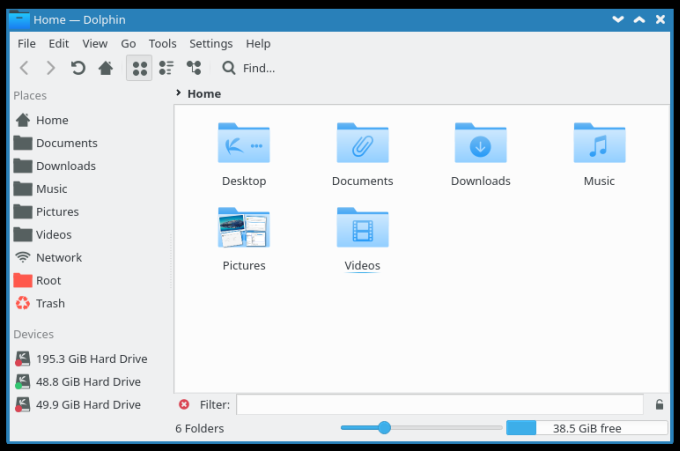 Okay overall but not the best. I was able to update the system, as well as install new stuff. I hit a few snags here. Steam is not in the repos. But then, neither are many Gnome desktop packages. For instance, I tried installing gnome-screenshot, as it's easier to work with than Spectacle, as long as it remains impossible to remove shadows in generated images, but the program wasn't in the repos. Odd. 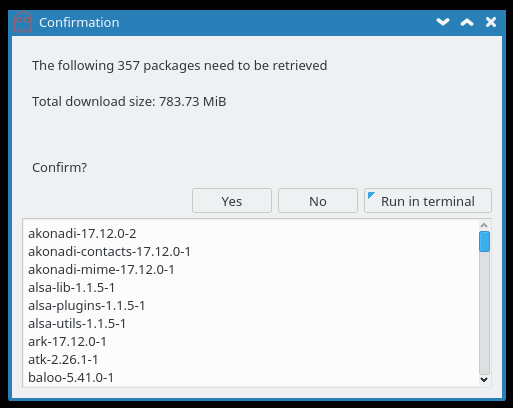 The real clincher is that the updates are intrusive. Your desktop will throw all sorts of errors while updating. This can happen in most distros, only it does not. Here, it was terribly pronounced. Spectacle failed to launch. Dolphin failed to display icons, complaining about io-slave or something. The responsiveness and performance were abysmal during the update operation. Among the worst I've seen on this box.

I thought getting some fresh packages would iron out some post-release bugs, alas no. Not a single problem vanished. Samba was still no-go, and even Bluetooth did not work, which I got to test now. P.S. It said connected on the phone, so the failure is even worse than you think. 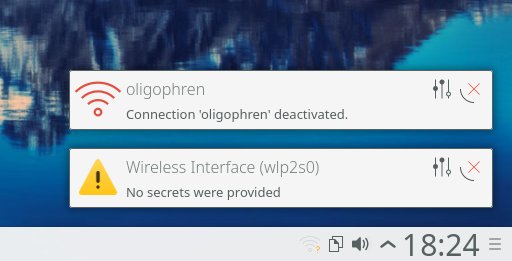 An okay set, with some odd choices here and there. Calligra makes no sense against the likes of LibreOffice, especially when 80% of the default screen equity is options and not text writing area, for instance. You also have QupZilla rather than Firefox, and such. Technically, this is more KDE than most KDE distros, but there's no reason to use an inferior product because it happens to have a capital K in its name or something. 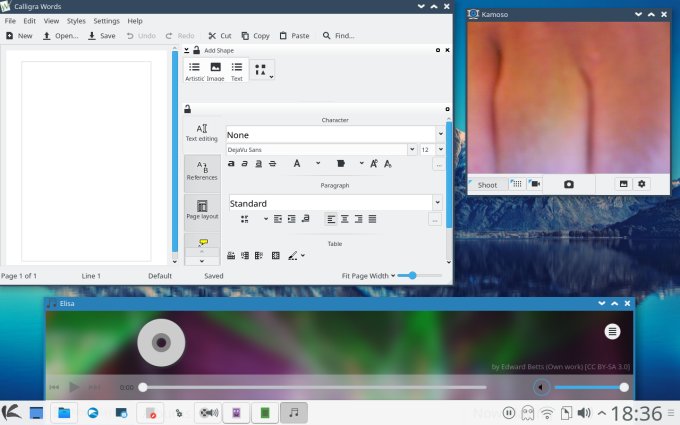 You get the playback, but the integration is odd. SMPlayer had a very basic system integration, with no cover art, and Elisa, which seems to be another media player, had none at all. Not sure why you need two players. 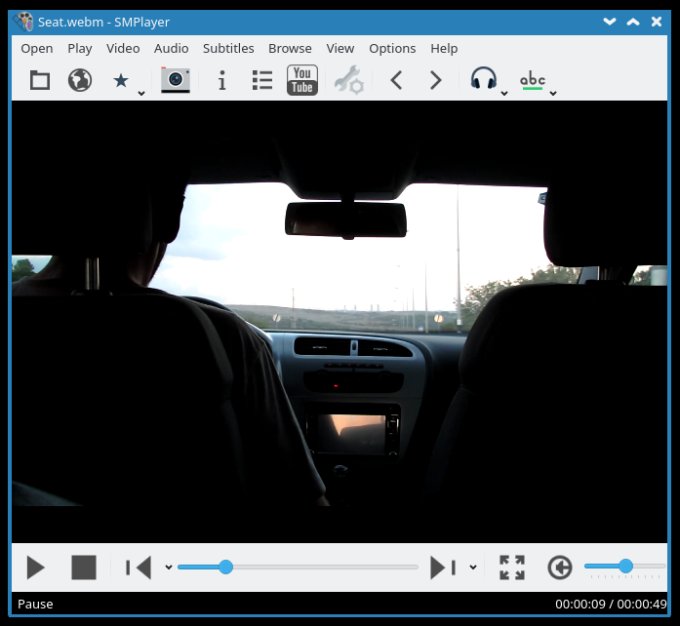 I tried to mount the Windows Phone first. Nothing. Not even a tiny little prompt from Dolphin or anything. I simply gave up.

More and other problems ...

Uh-oh. There were just too many. The desktop would freeze, and get stuck. In general, the desktop was slow, and so was the default browser QupZilla, which simply makes no sense whatsoever when pitted against any Firefox spin. Then, you also get Nvidia splash on logout, which makes no sense either.

The Show desktop button shows as KaOS logo with the default Midna set. Even if you switch to something like Papirus, with this theme in place, the icons look small and somewhat odd.

No desire to continue. My eyes were hurting, the system was feeling rough and unpolished, and I just could not be bothered trying to sort out all the bits and pieces where there were so many problems around. Hardware support is less than average, given the various network bugs and smartphone shenanigans, the visual slash ergonomic side is quite tricky, desktop customization did not work as expected, the app stack is average, and the issues all remained after updates, which were quite intrusive in their own right. The performance was rather bad. This was a decidedly slow system.

KaOS 2017.11 feels like a very buggy product. While I do like the Nvidia setup right from the start, this little gem is offset by pretty much everything else. Most other recent distros rarely had any issues with the LG RD510 laptop - apart from the ATA link reset on wake after suspend, which affects all of them - but KaOS is an exception to that rule with a rather depressing hardware record - Bluetooth, Wireless no-reconnect, smartphone support. And let's not even talk about Samba.

The responsiveness was quite bad, Kaptan did not work, and I wasn't enjoying the visual side of things one bit. In fact, I really do not understand the eye-killing choices that go with the default theme. All in all, there are very few redeeming factors to KaOS. If you're looking for something avant-garde, the Arch-based Antergos or Manjaro fit the bill rather well. If you want mainstream, Mint or Ubuntu or whatever. This falls somewhere in between, with nothing amazing in return. 2/10. Perhaps next time.