Dedoimedo
A Place to Learn a Lot About a Lot
Kubuntu 15.10 Wily Werewolf - Pretty useless

Now that we have slain Ubuntu, it is time to go a-huntin' after another magical beast. Today, yes, you guessed it right, it's Kubuntu. Looking back a few releases, this particular member of the Canonical family has not really shown any great innovation, passion or quality. Perchance the autumn rain shall wash away the filth and expose a beautiful creature of code and elegance?

Lenovo G50 shalt be my test system, and my test system shall be Lenovo G50, which currently hosts about seven or eight different operating systems in one big happy family, Windows and Linux included. And to make it all the more interesting, all the world's digital conspiracies come together in a bundle aptly defined with UEFI, Secure Boot, and other technologies. It will definitely be a worthwhile hunt. I hope. After me.

Booted fine. No woes, no issues. For some of the distros out there, hopefully, the question of being able to use modern hardware will not be too much of an issue. The desktop is quite vivid and colorful, and we all know Plasma can be the bestest there is, when the developers put their hearts and mind to it.

Well, you sure won't like the fact that Plasma still crashes when you try to innocently drag and drop some icons onto the bottom panel. We will see if this failure has been fixed after the installation, though. 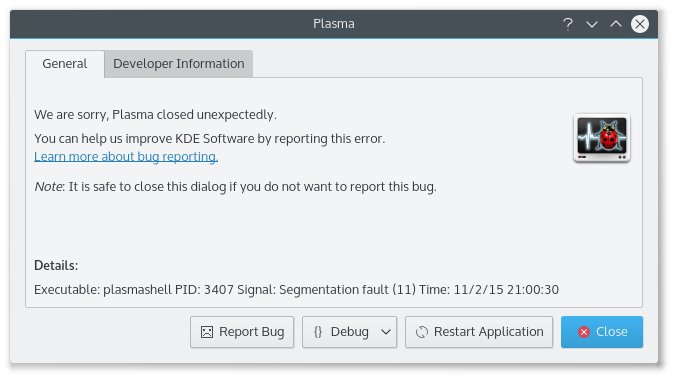 I normally just write a one-liner, all good, move on. This time we will have to elaborate some more. Samba printing, for instance. It does not work. Too much to expect from a distro to be able to do such a trivial task. The 35Kb worth of files for this activity aren't there, and if you have a Windows host and a printer attached to it, you won't be able to use it. Ubuntu 15.10 has no such problem. Kubuntu does = Kubuntu sucks. QED. Samba didn't work. Also failed. Double QED.

In the live session, this didn't work well. At all. We shall revisit the adventure once the system is installed. If you try to enjoy your smartphones before Kubuntu Werewolf is installed, your emotional satisfaction will be curtailed. Long story short, MTP dies, because the distro has been designed with too much suckilase, the enzyme that is used to produce suckinol, the hormone for ruining the user experience.

Suspend & resume in the live session

Why does this matter, you may ask? Well, because the distro wakes up without any open application, should you happen to have left some lying about on your desktop before you put your computer to sleep. In other words, it's almost like starting a fresh new login session.

Works fine. Plus, it's mercifully configured the right way. Didn't have any accidental taps. In fact, if you use taps, you should have your fingers sliced off with a red-colored light saber. There. And that's it. There's nothing else do to in the distro for now.

The wizard is extremely badly conceived, and it's received a total amount of zero quality control and/or assurance. You see, the second step is to configure Wireless, which is already configured. But if you skip this step, the wizard will think you're not connected to the Internet and prevent you from getting updates.

So you must go back, do the Internet nonsense, have your adapter disconnect, reconnect, and then proceed with the ability to mark updates. This is so silly that I wanted to blowtorch my laptop. But I persevered, for your sake.

Moreover, the distro is inconsiderate. After wasting about six minutes trying to figure out what you have on the disk, it never offers a side-by-side solution, like say Ubuntu. It will destroy your partitions unless you're careful. Plus, you get no names or labels for the installed systems, so you have to guess. Again, quite silly and uninspiring.

The slideshow isn't any better. It's as if someone created this distro because they had to, and not because they had even a morsel of passion in their hearts when they set about doing the job. Horrible. Depressing.

Trying to enjoy the distro

The installed system is pretty, but problems are immediately apparent. For instance, what is that gap between icons in the system area. More useless suck. Why is it so difficult to fix or avoid these little issues?

Worked, but extremely slowly. I really am developing sincere hate for whoever is behind this regression. Then, to make things worse, my Internet DIED. The distro exhibited the same problems that I saw in the 14.04 family, but the Realtek issue should long have been fixed, plus it did not come to bear in Ubuntu. Horrible.

I was disappointed how badly it was executed. First of all, Flash wasn't installed at all, despite this clearly being marked during the installation. When the prompt did eventually show, the system complained about trying to install unverified software. Mind, this comes from the official repos. Plus, notice the warning tags. Badly formatted HTML or whatnot. In other words, a failure.

To add insult to the injury, the operation actually failed the first time, and then succeeded the second. I have no idea why or how or when, all I know is that I was developing a very serious case of rage at this point. NO, this is not because of a missing sudo password. In the end, Flash worked, despite this moronity.

HD video sort of worked. Dragon did play my 1080p WebM files for instance, but not my 720p AVI car camera videos. Not sure about the encoding, but they work beautifully in most other distros, concordingly ergo ipso facto fail.

Last but not the least, MP3 didn't play at all. FAAAAAAAIL!

A rather arduous challenge, I must say. In the end, I did get some of my devices to show, but not without problems and difficulties. By default, iPhone is a no-go, which is a shame. The Ubuntu phone took a while showing up in Dolphin.

This is the second important aspect of the smartphone connectivity. It worked somewhat better than Ubuntu, but it was still somewhat a rough ride. After pairing the device, which also takes a couple of attempts, you end up with a weird icon in the system area. Could be a part of the design. For me, it was crucial to see the changes and improvements with my Aquaris phone, but it also highlighted the issues in the distro.

However, it worked. The ugly part is, the mount points in the side pane look almost randomly listed, and of course, you get two entries for the phone, one with a regular mount, and the other via Bluetooth. What is seen cannot be unseen.

A decent if not phenomenal setup. You have Firefox, Amarok, KMail, a whole bunch of KDE slash Plasma programs, a few odd utilities here and there like wordview, which I presume is designed to show Microsoft Word files. K3b is there, too, but no LibreOffice, which is disappointing.

Another bonus is that you can finally download wallpapers and themes through the system without getting weird repo XML errors. Not that I had any desire to tinker and play and fiddle. My Plasma games will have to wait for another occasion.

Decent overall. Better than Ubuntu 15.10 for the most part. Again, with normal usage and a very simple, rule-of-thumb measurement method, you get about 3.5 hours. Not ideal, because previous editions managed longer times, quite easily.

The reason why the battery probably lasts longer than Unity is because the CPU is quiet, even though the memory utilization is high at about 800 MB. We shall yet see how the Xfce and MATE versions behave, but if we look at previous versions, 15.10 is a big guzzler, and there's no justification to the increase in any way. Poor coding. That's all.

This was one is quite all right, I guess. At least everything seemed to have worked, including suspend & resume. I did have the desktop wallpaper vanish once after resuming, but that was the sum of my hardware-related woes in the installed session. None of the apps gone AWOL trick like before the installation. Still awful, of course.

I am also not pleased that you get additional drivers for the distro. Happens now and then, and it really annoys me. Either all members of the Ubuntu family offer the same kind of thing, or none. I hate this inconsistency. Plus, there's a bug in the wizard obviously, and it's showing the same entry twice. More fail. What's this microcode anyway? How about a quick explanation? Something!

Stability is quite crap overall. Drag 'n' drop for icons still crashes Plasma. STILL. I have reported this issue more than a year ago. And even when fully updated, Werewolf still hiccups on an icon drop to the bottom panel. This is total stupidity. And upstream, will you fix this shitty thing please?

Another problem is that you get three separate helper programs, all designed to assist you in installing extra software, like language packs and whatnot. I am not sure if you even need one, let alone three.

The login is also super, super slow. Ubuntu boots in about 1/3rd time it takes for Kubuntu to offer a usable session. The suck list just keeps getting longer and longer. Then, the whole system tray suddenly changed after playing with Bluetooth. This distro seems cursed. I didn't bother with package management too much. After not having any fun with the Flash installation, and all those helpers cramping my style, plus everything else, I felt no need to try to use Muon, which still remains a highly inferior product compared to the Ubuntu Software Center. Indeed.

Really cool. And when you look past the Kubuntu layer of suck, it's really neat. Alas, in vain, because I will be deleting this distro within the next day or so to accommodate for the Xubuntu install. It merits no survival on my disk. There were a few other problems, but I don't remember them, or can't even be bothered to check my notes. I mean, who cares, after all you've seen here.

I heard there's been a change of management with the Kubuntu community or some sort like that. Well, perhaps it's for the greater good. I am quite close to abandoning Kubuntu forever. Much like PCLinuxOS, it's slowly creeping toward irrelevance, offering none of the love and fire that you'd want and expect. It's exhausted, it's defeated. It just doesn't try to win you in any way. It's there because it exists. Nothing more.

Moreover, there's the matter of inconsistency. I mentioned this before, and I will mention it again. I absolutely loathe when things break in between releases. Small, simple things. Like Samba or printing or codecs. Why? WHY? WHY! How difficult is it to try to offer a sane, steady user experience? Why do I have to dread every single update? You can never really know. One version, things work, and then they don't. Samba sharing. Year 2015. How difficult can it be to copy files from one frigging computer to another without problems? It's not like sending probes to Mars. Just a bloody copy operation, source destination. Simple.

On top of that, Kubuntu 15.10 Wily Werewolf literally fails in every aspect. It's totally useless, it's buggy, it's crashy, and it offers nothing that would make it even remotely interesting. Nothing useful or practical about it really. Nothing. I'm sad. And angry. Avoid at all costs. 0/10. Bye bye now.