Dedoimedo
A Place to Learn a Lot About a Lot
The Great Linux World Map 2.0!

Welcome, map 2.0! Yeah! This is the moment you have all been waiting for. Sort of. The second version of my would-be legendary Great Linux World Map, Typus Orbis Terrarum, enhanced by your love and suggestions. It's down there, awaiting your click-to-enlarge pleasure. Only we must begin with a bit of a prose. Skip the talk, if you're bored, and go straight for the big and shiny pictures.

Let us gently start with what the Internet village had to say about the first map. Indeed, this proved to be an interesting experiment in social interactions, humor and artistic criticism. Despite my best intentions to clarify that the world map is just fun, and inaccurate fun at that, this seems to have evaded a handful of readers. Some people took a personal slight against my use of land masses, seas, names, as well as the positioning of different distributions. My use of Comic Sans fonts garnered me a handful of colorful titles and nicknames, including being sexually challenged and dabbling in feces. Alas, fonts seems to have such dreadful power.

There was also the subtle reference that my map was an XKCD knockoff. Better yet, that I have a proverbial hardon for Randall. I can only take that as a compliment. And let's not forget that I did state in my opening sentence that there's a social networking map, hence XKCD, and the simple fact XKCD has been listed in my Greatest sites for years now, since it's one of the best sites out there, plain and simple, hence XKCD.

Now, not all is bad!

Far from it. I received tons of support, encounragement and good suggestions. For example, someone suggested moving Kubuntustan to the shores of the KDE Sea, and this stands to logic, plus it sits well near other Stans. Now, this was such a cardinal change that I implemented it instantly, releasing version 1.1 within days from the original. Other changes could bear this update.

People lamented the fact Puppy Linux and Knoppix were not mentioned. However, Cape Sudo went well with De Niro fans. Others wondered why The Great Compile was located north of Archland when it ought to be on the Gentoo landmass. Slackware fans complained about their kingdom being too big. Ubuntu communism was frowned upon. Some people recommended I add a pirate ship labeled SCO off the Novell shores. There was a bit of demand for security distributions, too. A few people wanted to see Microsoft and Apple sneaked in as foreign, forbidding continents.

On the other hand, most people missed the subtle reference to Gecko Island as being SUSE land, despite having a namesake lake there. I guess the lizard slash chameleon slash gecko analogy was a poor one. Mount Chroot invoked quite a bit of anger, go figure. People missed the Tolkienesque hint to Mount Doom. And of course the obvious mount command itself. And some of you missed the most cunning of all hidden cookies; spread the word. Word, world. Get it?

Of course, some of the discrepancies were introduced on purpose, just to see if the audience could spot them. Hihi. But I listened. Hence, version 2.0 is here. I'd like to thank readers and participants over at slashdot.org, reddit.com, PCLinuxOS forum, Mepis forum, as well as people who mailed me their excellent ideas, Umar, Adam, Jason, David, Steven, Matthew, Kalle, Jake, Michael, Victor, Eleno, Peter, Simon, Fintan, another Michael, Dennis, Bram, Roberto, and apologies to anyone I may have missed.

OK, version 2.0. It's completely different from the first one. It's de facto a whole new world. In fact, you can treat the two versions as Linux distributions in parallel universes if that helps. Yes, that ought to do it.

The map is STILL numerically inaccurate. But if anyone can tell me the EXACT percentage of distribution usage, then please do so. Distrowatch popularity rank is a good thing, and I used it in the first version, too, but it was more sort of an estimate, and here I did try to stick to numbers, a little. And I'm still using the n00b fonts, so you'll have to excuse me for that.

Anyhow, we now have continents, and mostly the popular players are featured on the map, somewhat similar to my illustrated Linux distro newbie guide. Plus, I sneaked in a few jolly surprises, reflecting the modern era of computing. Dragons, pirates, you name it, it's all there. And there's a lot of innuendo, a lot, like the compass arms. Take a good, careful look. Not a random thing that, at all. I want you to email me all your witty observations.

Lastly, I used the Tolkien Style Map Brushes (TSMB) GIMP brush set, so obviously, my thanks go to TheWhiteCrayon over at DeviantART. Yes, Tolkien gets his reference in this work, too. Enough talking for one map.

Here's the map, 2752x1548px in size, in 16:9 ratio, good for desktop wallpapers. You get the full colored version (2.27MB), linked below, a clean black & white version (693KB) in case you want to use your own coloring scheme and make modifications, and I warmly welcome those, and a special black & white version (693KB) with some extra Latin text, see if you can spot it there. All PNG format. Click to enlarge. 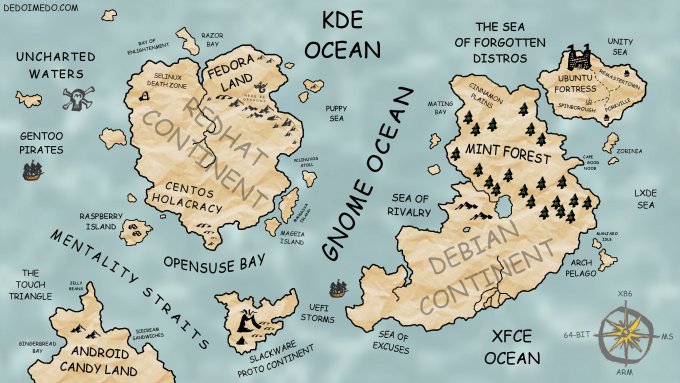 Once again, I honestly hope you like this! Suggestions? Email me.

Remember, the map is entirely free, no strings attached whatsoever! You will never have to pay anything to get this thing. However, if you think my nine hours of artistic work deserve some kind of reward, you may also want to consider buying the map to support this website. Plus other perks.

The same Buy button available for the first map is also used here. You can choose among five prices, ranging from USD1.00 to USD50.00. The payments are handled securely by PayPal. Thank you.