Dedoimedo
A Place to Learn a Lot About a Lot
Manjaro 21.2 Qonos Gnome - It's an alright distro, but ...

On my quest to eternal happiness, I occasionally stumble past Manjaro, an Arch-based distro with a holy mission. Making the nerdy less nerdy, making the tedious accessible. This has proven to be an almost impossible task in the world of Linux, because so far, we've not dented the 1% barrier by much, and Windows remains the operating system de jour (or is it de jure) for the plebes. But attempt we must, because life is defined by endless if irrational hope.

All right. Manjaro. I've had all sorts of manners of luck with it. But overall, it's a decent distro with an upward trend. Nibla was fairly good. So test again we ought. But in order not to be too boring or repetitive or both, I've decided not to do the Plasma edition (just yet), and went for the Gnome experiment today. My newish IdeaPad, triple boot, AMD processor and graphics, NVMe storage, and such. Should be interesting. Avanti.

When you boot Manjaro, it asks you whether you want to boot with open-source or proprietary drivers. An interesting choice of wording - typically, the Linux folks are all about free versus nonfree. I chose the latter, and the boot sequence was all text. Not sure what the end result means in terms of hardware enablement, but things seemed okay. Hint, this is a great thing, because very few distros allow you to actually utilize your graphics drivers right away. Anyhow, cue Gnome desktop. ZOMG, that oppressive dark theme. 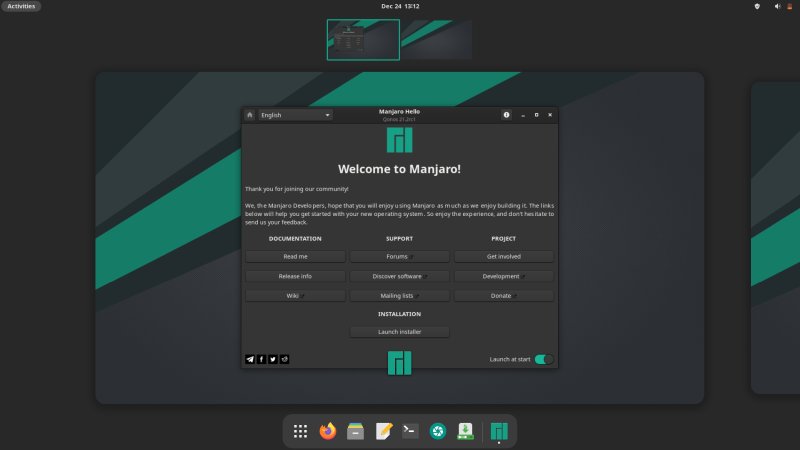 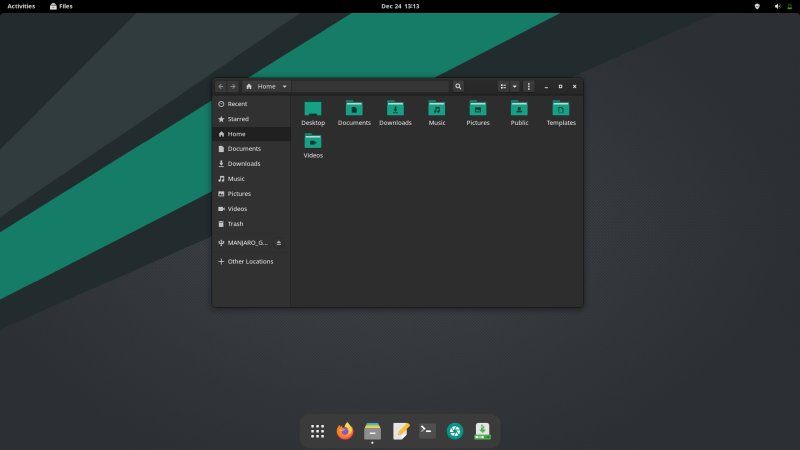 Let's face it. Dark themes are for nerds. Normies don't do dark. Ask any hundred people and you'll see. Do your parents or grandparents use dark themes? Your accountant? Nope. Moreover, dark themes are universally badly done. I can think of only one instance of a dark theme done well, and that was Windows Phone. Everything else is just blurry and sad.

To make matters worse, switching to something bright isn't a trivial task, because stock Gnome doesn't have the ability to do that (hello 2021), so you need Gnome Tweaks, which, luckily, Manjaro provideth, but it gives you an unnecessary popup message that the extensions management functionality has been moved to a separate tool (why), which you need to separately install and configure (via Flatpak), which just adds unnecessary complications to the workflow. Top that with the fact Manjaro DOES have this utility installed, so the message is bogus and unnecessary. Even so, when you do want to switch to a better theme, the available choices, other than Adwaita, are bad. Why? Pale fonts! That's why. Once again, the gray-on-gray depression strikes. My eyesight is awesome, and I can work an entire day in front of a computer without so much as even a mild itch of fatigue. With Manjaro 21.2, especially the dark theme, my eyes went watery in minutes. 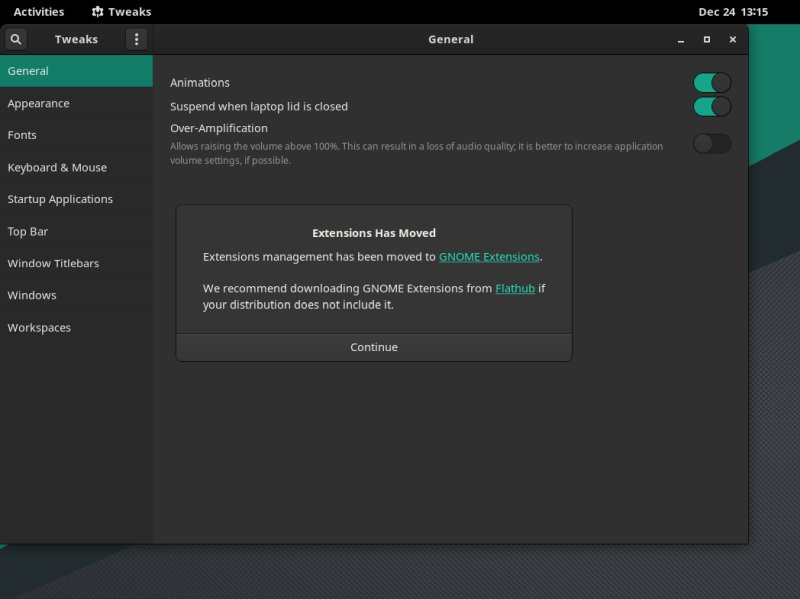 I didn't spend too long in the live session. Launch installer. Searching for a module. Eh what? Dark theme used, my choice not respected. Screenshot borders for the installer, different from other application windows. Madness. Consistency. Select partitions. Okay. Warning, the EFI partition is less than 300 MB. What! 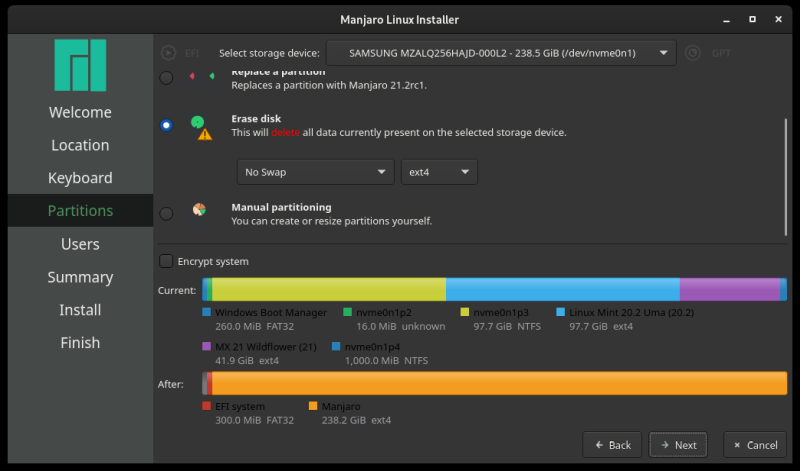 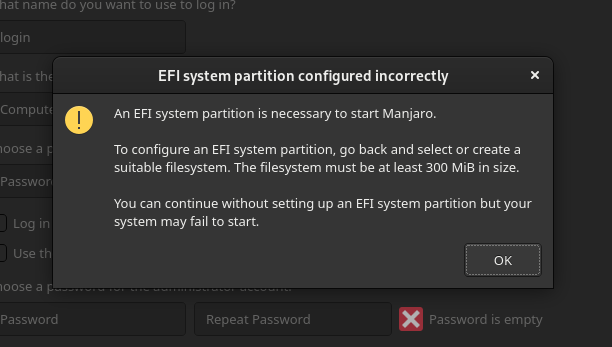 This is pure nonsense. No operating system insists on this partition being that big. 128 MB is fine, 256 MB is plenty. And it's not like I have a choice with a laptop that comes preinstalled from the vendor and I am happily triple-booting on it. Pointless.

The installation slidedeck is meh. Looks like Impress slides turned images embedded into the installer, except they are quite low-res and grainy, and look really bad, to say nothing of the awful choice of font color and contrast again. The setup took about 6-7 minutes. Not the fastest I've seen on this box, but not the slowest either. Decent. 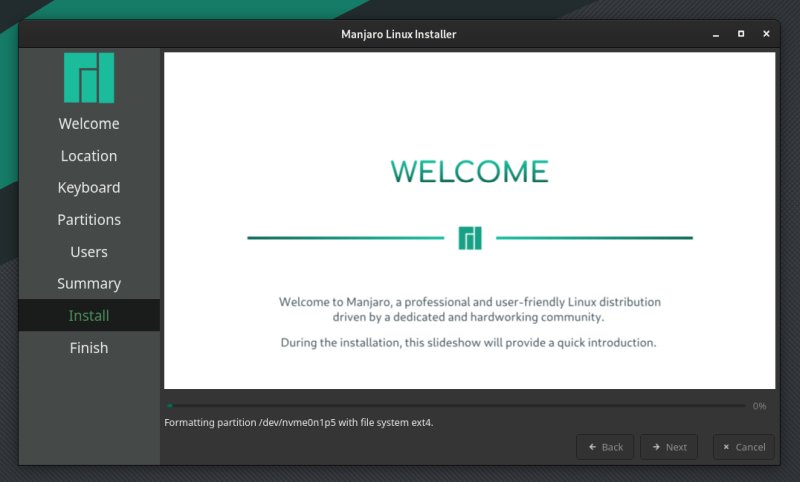 Let's start with some good news. The EFI warning is meaningless. Spotless boot sequence. No spurious text messages. Time to boot? Only five seconds. That's it. This is the record time I've ever seen on this machine. Previous incarnations of Manjaro also did well, but this one just tops it. Very cool.

My Wireless connection was also preserved. Nice. The downside of this is, you don't get the wallet setup, so when you go a-network, you will need to feed in your (Samba) credentials twice before they get accepted and stored for future use. A bit annoying. 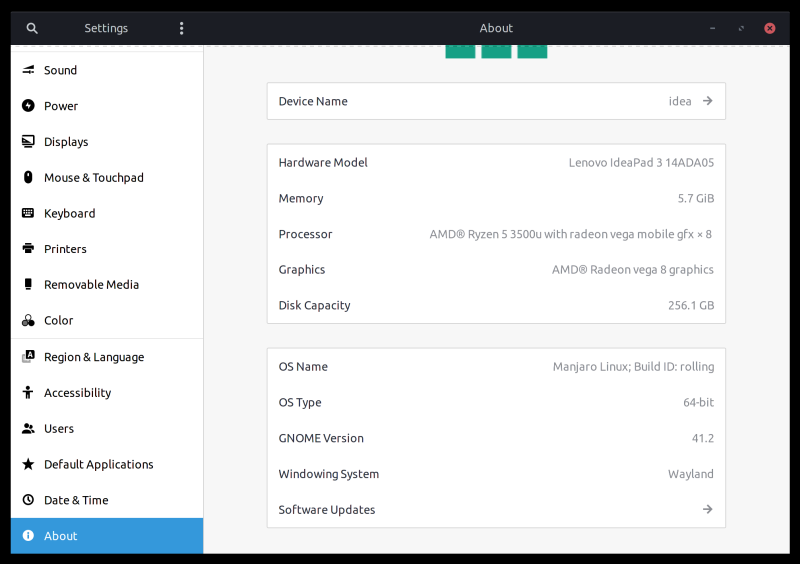 My first order of the day was to actually undo most of what Manjaro brings on the UI tweaks side, because the defaults are not ergonomic enough. I had to do a lot, and quite frankly, other than my personal stubbornness and mild fascination for the sake of this review, all of this work feels like punishment. 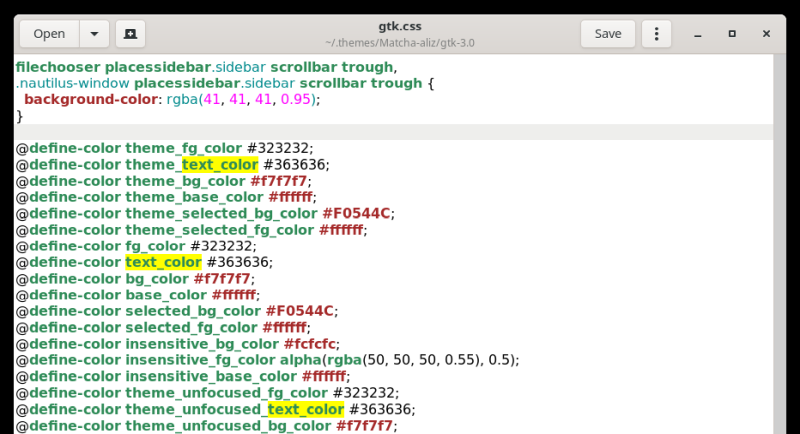 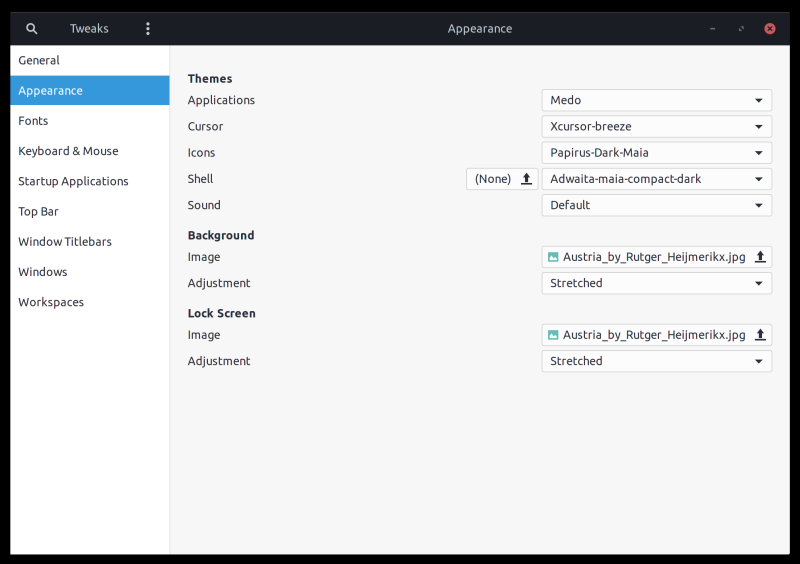 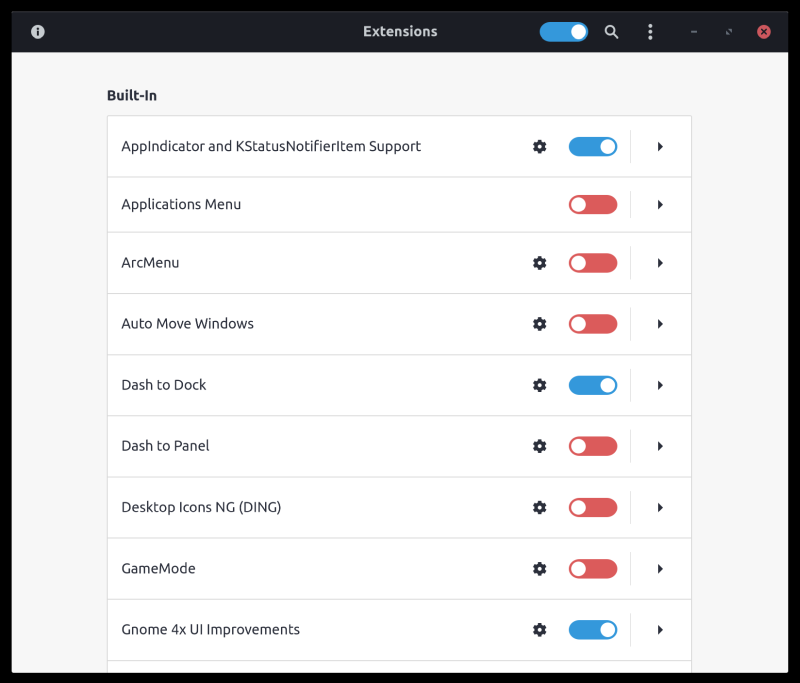 Not that the new Proton look is any good ...

Finally, I got some decent results. And yes, when you put some effort in, Gnome can be quite pretty. 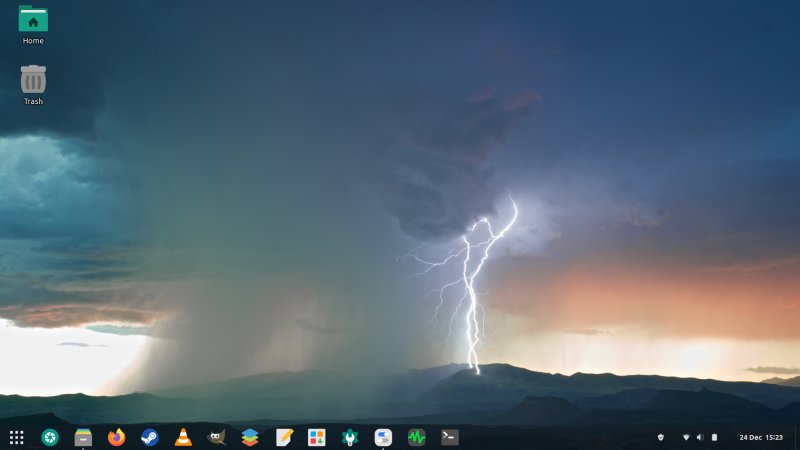 Nope. You only get 100% or 200%. You need to turn fractional scaling on, from the command line, as I've outlined in my Gnome & HD scaling guide, to be able to get fractional values. I tried 125%, which was kind of okay (well, at the very least, I got better results than Cinnamon in Mint a couple of weeks back), but I still needed new fonts and pure black color to make the system actually usable. This is not how things should be. Again, the only desktop environment that does scaling well in Linux is Plasma. 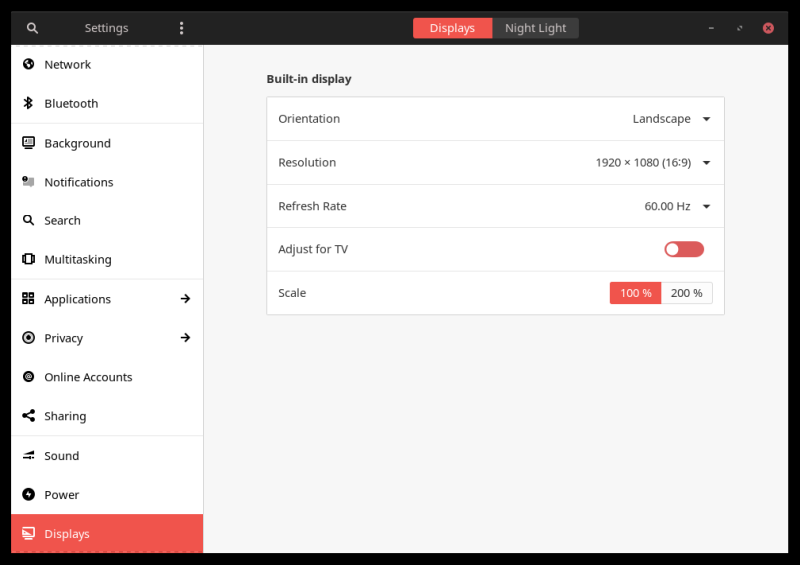 Notice the default font color paleness (right side). Also, the screenshot shadows aren't all equal. The top side and the other three sides have different margins. Very annoying.

I've always complained how Manjaro doesn't have a real package manager. Well, it seems to be slowly improving in this regard. The new tool, whatever it is, offers screenshots, descriptions, a semblance of a real application store. You also get recommendations for popular, common stuff. Now, things are still tricky, because you're still asked to approve various dependencies and optional packages, and I still don't know why there are two Steam packages available, the Native one and the Manjaro one. 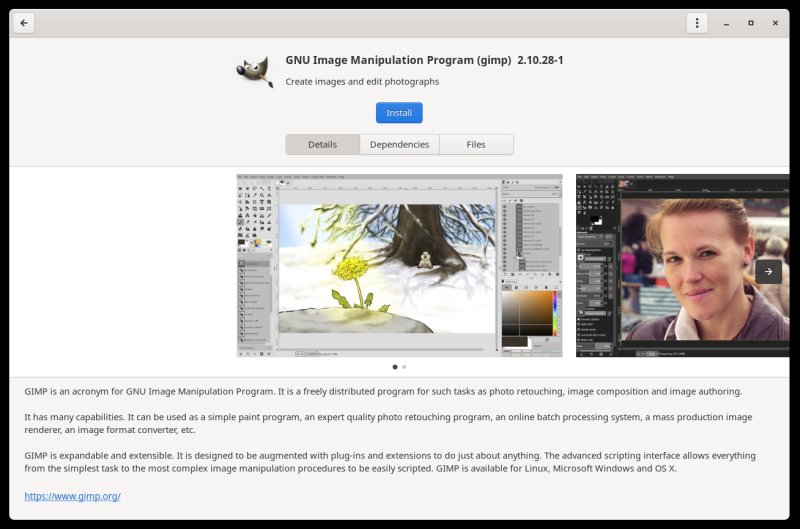 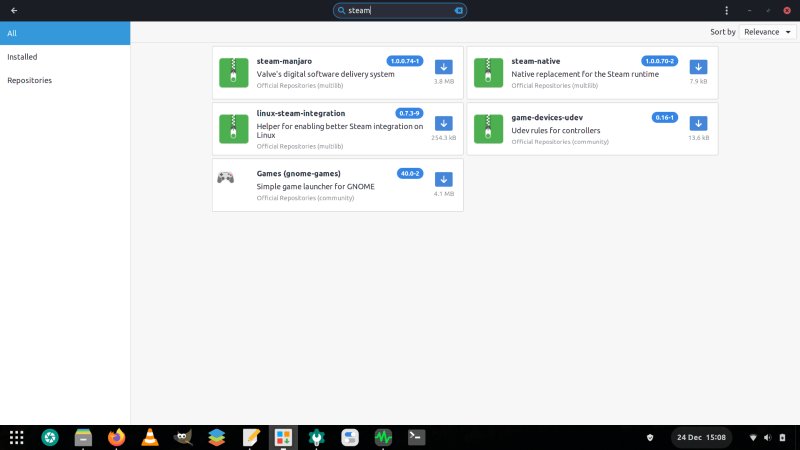 The updates were fast, really fast. So there's some decent progress here, for sure. 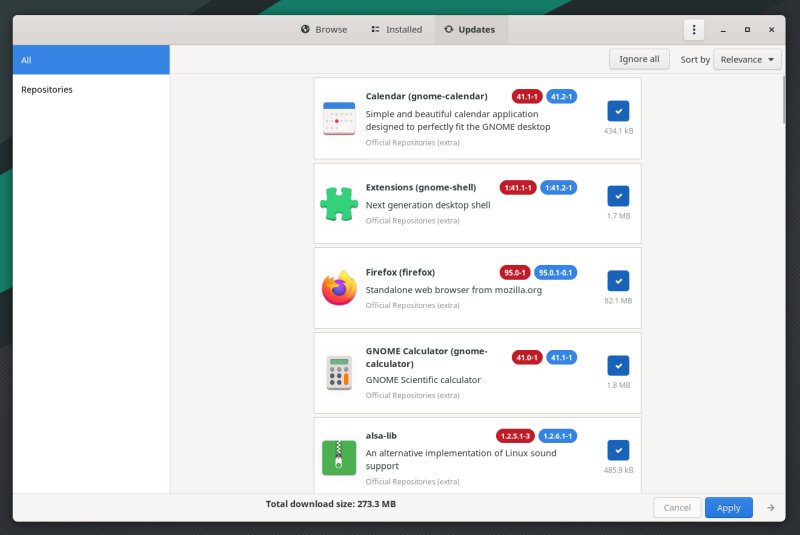 For a 3.3GB ISO, Qonos doesn't bring that much to the table. You do get a decent selection of programs, though. Lollypop is the default music player, and it's kind of okay, but I prefer VLC. You also have OnlyOffice as the office suite choice. Very interesting. There's Geary for mail. 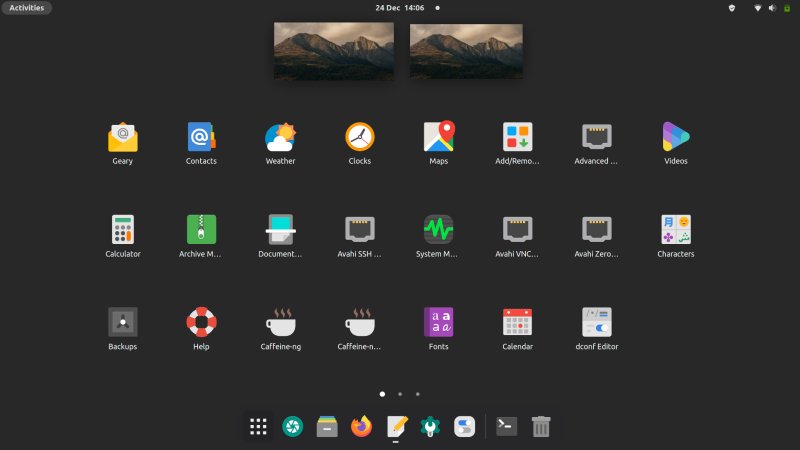 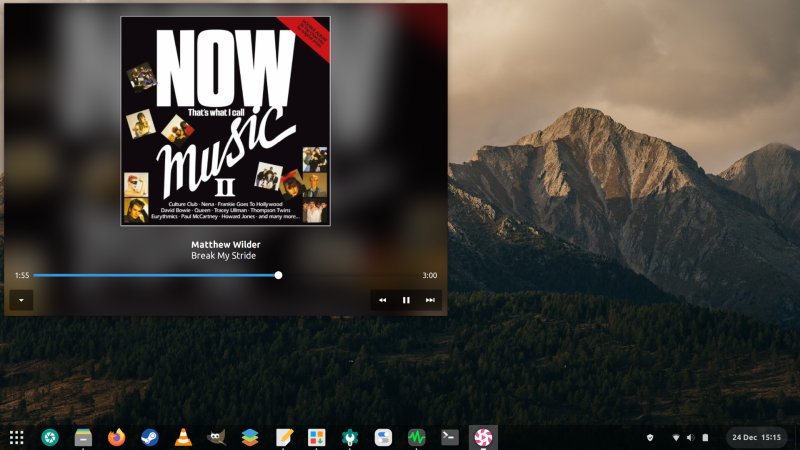 The system is blistering fast. Really. Gnome notwithstanding, you get speeeeeeeed. This is by far the most responsive Gnome I've tried in the past few years. The only thing that compares are the olden CentOS releases. This also manifests in suspend & wake (less than a second), shutdown (just one second), and we've already talked about the boot times.

Wayland didn't bother me, and things were cushty enough. Now, I guess where you "lose" is in the resource utilization. While the memory consumption is similar to most modern Gtk-based desktops, the CPU utilization was relatively high, and the percentage needle often ticked in high singles. Not sure why, but there you go. 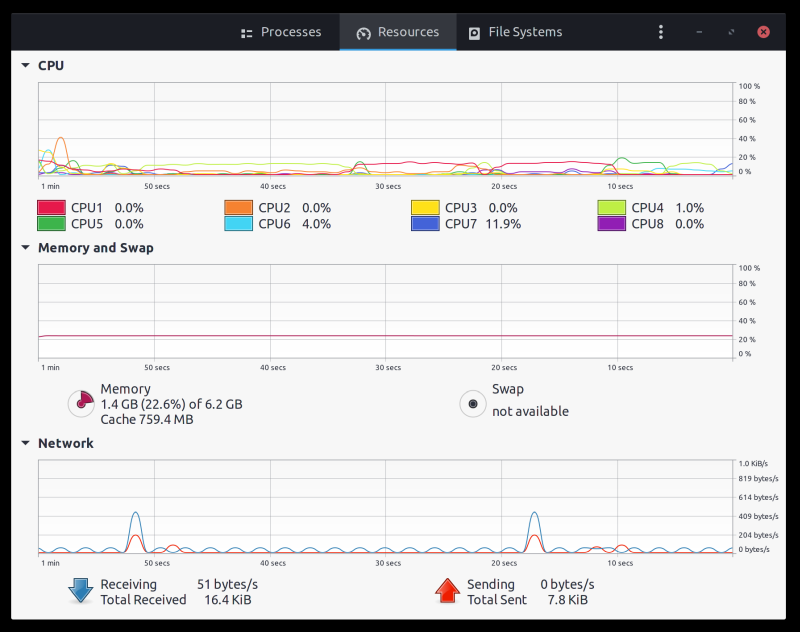 Samba speed was good - about 15 MB/s, so definitely among the better results. Not always consistent. All in all, okay, but the sheer variance among different distros in my exact, unchanging setup is worrying. But this is old news.

Manjaro Qonos, and by proxy I guess Gnome, now allows you to switch power profiles through the system menu. You have two choices - Balanced and Power Saver. Why isn't there a Performance profile, pray? Anyway, I tried both, and there were some differences. The system is definitely snappier, and there's less lag with Balanced. But it does not seem to affect power consumption. With both and/or either and 50% battery, the system reported 4.5 hours of juice, at best. This is way less than what most distros on this box do.

I presume this is the result of the CPU jitters. Also, the battery drain indicator seems broken. It remained stuck at 100%, no matter what. And if you plug the charger in, like many a distro on this machine, the screen dims fully. A bug that crept in one of the kernels and has remained around since. Typical zero-QA randomness. 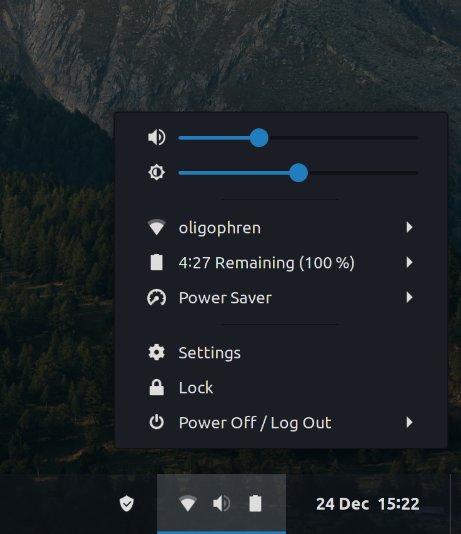 Linux distros seem to be a game of chance. Take five categories of functional usability. Now, three of these will be excellent, and two will be awful, and you can choose how to assemble the final model, but you won't get away from the equation. Something will be brilliant, and something will suck, and in the next release, the odds will change in a random way, and round and round we go. This was exciting in 2007, it's sad in 2021. The number of people who actually want to stick by the classic desktop is not getting bigger, newer generations don't have our fascination with the keyboard and mouse (apart from the cruel reality of work), and each day, the dream of Linux making it big gets that much farther away. And it comes down, among many various reasons, to the total lack of product focus, no quality control or any serious testing, and dev-focused, dev-driven design.

Manjaro 20.2 fits the description well. Some superb points coupled to 2005 command-line tricks that no one wants or needs, dubious ergonomic choices, and just too much inconsistency to rely on for serious work. I know the nerds will hate me, ignore me, label me [favorite ad hominem], whatever, but that does not change the fact that only a pure, dedicated techie can and will be able to commit oneself to Qonos. Now, that said, I am actually cautiously optimistic about Manjaro. Over the years, it's showed steady progress. Yes, lots of inconsistency and randomness, but there's progress, too.

This means, one day, Manjaro could be a mature, reliable system for ordinary people as well as diehard techies. I just hope that happens before total Digital Dystopia befalls us, before the "bullshit as a service" devours us all. That's the reason for my bitterness, dear nerds. It's not that I hate Linux, it's that I hate the world that awaits us, and resent the fact no distro has managed to redeem us yet, because they are all stuck in a self-feeding loop of dev-centric mantras that have no bearing to 99% of people out there. Anyway, Qonos ain't bad, but its Gnome flavor is probably not the best choice, and you might as well give it a try, see what gives.