Dedoimedo
A Place to Learn a Lot About a Lot
Pardus 2011 - Best KDE4 around, but could be better

Pardus is easily one of the lesser known bigger surprise Linux distributions. Developed in Turkey, it does not strike you as a top choice for your desktop, does it? But it is a top-notch distribution with a handful of clever tricks that make it a great candidate for daily use. I was mightily impressed with the 2009 version, which is why I'm testing this year's release.

Today, I'll show you what has changed in Pardus 2011, for better and worse, the new features, the new problems, all sorts of things, the usual super-long let's cover everything stuff. Now, I listed this distribution as the most underestimated and most newbie friendly distribution of 2010. But is it still that good, you may ask? Well, reading this article will unlock the answers.

Pardus does not have an installable live version. You either go for the former or the latter, but not both. This is a bit disappointing, as this necessitates two separate DVD downloads, especially if you want to check hardware compatibility with your machine.

To cover all angles, I did download Pardus twice and tested the live edition and the full system. My test rig was the abuse-dedicated T60p, a 32-bit dual-core laptop with 2GB RAM.

I guess this is a mighty claim, but it seems to be so. After having tested Sabayon just a few weeks ago, I can claim this with respectable certainty. It's a combination of factors, really. Kaptan, the omni-potent system configuration utility, also plays part, combined with fewer nags and notifications that customarily pollute KDE and confuse the users, a more streamlined and polished theme, and overall system usefulness. But one thing at a time.

Kaptan will indeed greet you and offer to setup the desktop completely, including buttons, the location of the menu, the user profile picture, which is redundant in the live session, the wallpaper, and many other items. 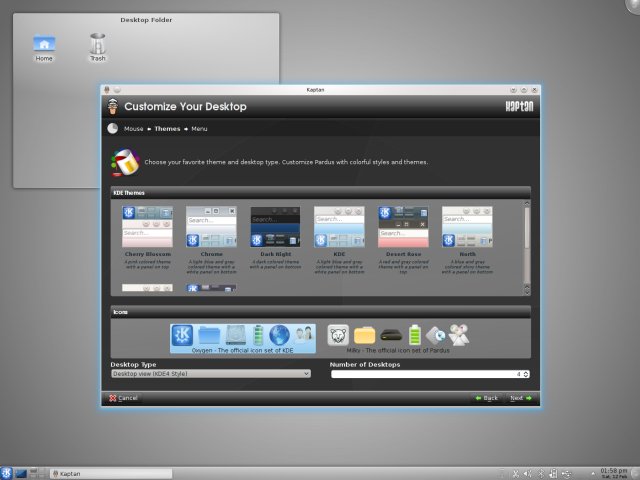 One thing that is missing is the auto-configuration of network, which featured in 2009, but is removed in the current edition. A sore loss, I might add. In fact, the network is disabled by default. You will have to start it, using GUI, before you can see your Wireless networks. Unlike Sabayon, KDE Wallet did not popup and annoy me.

It's a 50:50 tie. You gain some, you lose some. But why remove an excellent feature that worked marvelously? If you're setting up the desktop from scratch, how is the network connectivity any different?

Eventually, after fiddling with Kaptan, you'll be able to redecorate your desktop any which way you like it.

I still think the default scheme is the best choice. The icons are soft and rounded and really posh. Beats Windows 7 and is almost as good as Ubuntu or Mint. Compared to stock Gnome, this looks handier, really, and I'm not fond of KDE4 at all, which says a lot.

Some annoyances still remain, like the aforementioned Wireless, the fact you can't bookmark network locations, which was previously possible and too many notifications on trivial items. KDE4 is getting better, and we'll talk more about this when we install the system, but there are many things left to polish, including not trying to compete with Windows head on.

And I want bigger fonts. And I want subpixel optimization to be selected as the default choice. I'm not 17 and I don't like to squint at my monitor. Gimme big fonts!

The theme also comes with glow, reflection, shadows, transparency, and other cool yet subtle effects activated, in a not so subtle nod to hey, we're almost like Windows 7 posh but not as dramatic as having Compiz turned on by default.

Worked quite well, as expected. Clementine purred without a hitch, which was not the case in Sabayon. More akin to AriOS, which also includes the program. Youtube played well, too.

Speaking of Firefox, it's a 4.0 beta and it opens with a Turkish page. Well, understandable considering the distro legacy, but a more neutral and international choice would be more logical.

Pardus comes with a rich and colorful repertoire of programs, some pure KDE stuff, others a variety of interesting and useful stuff you would expect from a modern, mainstream distro. The overall selection is reasonable and balanced.

Among the available software, there's Marble, digiKam, MPlayer, and kdenlive, which I used to create my fabulous Frankenstein movie. You also get LibreOffice, which comes instead of OpenOffice. There's the drop-down terminal application called Yakuake, and a handful of games and other utilities, for instance, Kipi and Kubrick. The emphasis is on letter K.

Lots of other programs, but you get the idea.

Now, let's sum this live session. Very good, very polished, quite refined. The big downsize is the removal of the network configuration wizard. Other than that, the faults at hand are inherent in KDE4 and not Pardus, but they still can't be excused.

Even so, all that said, Pardus seems to offer the most sensible KDE4 desktop at the moment, should you prefer it over Gnome and other alternatives.

Lessons in love ... eh geekdom. Comparing to original Pardus 2009 installation, it's a little clunkier, more complicated. The partitioning wizard was the worst bit, I'm afraid. Whenever I expanded the Expanded partition [sic] to glimpse at the logical partitions and assign them mount points and filesystems, every time I completed a step, the wizard would fold the list. It's a matter of clicking on an icon, but it's still annoying. The little details, it's elementary, Watson, I mean Arif.

There were no bad things, but after using lots of distributions that offer the seamless installation in one go without intermediate reboots and/or no integrated live sessions, the thing felt old and boring. No fancy slideshows to amuse you, a somewhat non-linear and not so intuitive procedure. Later on, Kaptan compensates for this, but again, this is no excuse.

Pardus 2009 was much friendlier in this regard, I must say.

After the system came up for the first time, I spent some time playing with other options that were unavailable in the live session. Kaptan let me configure system updates, which is quite good.

However, it did confuse me with Smolt, which is a system configuration and info collection tool, allowing you to send your user profile to the distro servers, where the hardware statistics will be used for improving the desktop experience in the future. Completely voluntary, and that's not the big deal. The thing is, Smolt reported default runlevel as 3. But this is incorrect, I'm running full GUI, which is runlevel 5.

I didn't like this glitch. It left me unsettled.

The unique PiSi thingie worked well. It wasn't the fastest in the world, but it was fairly reliable and did what was expected of it. Like the last time, the relatively small selection of programs available for Pardus is the weakest link of the distribution.

More on KDE4 and Pardus desktop customization. My final choice was Lancelot menu and a grassy background, with transparent menus. This reminds a lot of the heated debate about the default Ubuntu desktop, before Lucid came out. Looks ok, but the smoky, glassy and somewhat blurred look can be tiring.

Other than that, Pardus took about 400MB running. Suspend and resume worked fine. There were no bugs or issues of any kind, nor KDE4 crashes, which shows it can be done with some careful attention to details.

I found a weird document in the Documents directory. It's an .odt file, it's a read only, and I have no idea what it does. Apparently, some historical piece, but how is it relevant to anything, I can't tell. The localization also does not sit well with the fact the distro is available for download worldwide.

Pardus 2011 is a very decent distribution. But believe it or not, I think version 2009 was a better, more reasonable release. It was friendlier, simpler to install and it had none of the tiny weird things that affect the current edition.

If you are looking for a super-easy KDE4 desktop, this is it. Yes, Pardus is the most refined KDE4 edition all around, with pretty much everything working out of the box, good stability, the extremely sensible Kaptan configuration tool, and a balanced choice of applications. On the other hand, you will have to live with a somewhat restricted availability of programs in the repository, no Wireless network auto-setup and a few other KDE4-centric regressions. The installation was also rather clunky, this time.

Pardus is good, but it could be better. Which comes as no surprise. Pardus 2009 was too good to best. The same thing happened to Ubuntu with Karmic. This probably means that we will most likely see another winner in 2012. For now, Pardus gets 9/10.