Slitaz has grown fat. By whole 5MB. The last time I've tried Slitaz, it was around 25MB. Version 1.0 was an interesting project. Obviously, the minuscule distro could not possibly offer everything fully fledged operating systems normally do, but it still delivered a reasonable compromise. It ran fast and light, sported a pleasing desktop and had a plenty of applications available for download, using a rather simple apt-get style command line utility called tazpkg. On the downside, there was no Wireless support or Samba sharing. Likewise, I struggled most fiercesomely to get Flash configured and running. And since I had no way of connecting to my Windows machines, I was unable to test video and audio support.

Overall, Slitaz 1.0 was a good choice, somewhere between Puppy and DSL. Well, version 2.0 has been released some time ago. Let's see what has changed - and whether the extra 5MB mean anything. 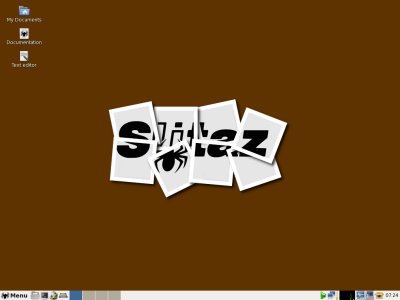 Well, I did not invent this sentence. It comes from the official site, where you'll find the Slitaz download link, as well as the listing of all the available packages, which should help you find the right applications for Slitaz.

The boot has not changed much between version 1.0 and 2.0. You get the same semi-English semi-French menu, and you're asked a few questions regarding the language, keyboard and the resolution. If you've got fast fingers, you'll get Slitaz running in less than 30 seconds.

Slitaz 2 dispenses with the login window and action logins (exit, reboot, etc). Instead, you get instantly into the desktop, avoiding a potentially somewhat confusing and unnecessary login.

The new desktop is more refined and polished than the older one. It feels more rounded, more complete and definitely more expensive. Like Crunchbang, Slitaz makes a smart and pleasant use of the Openbox manager.

One thing I would change is the desktop background. It's dark and low on contrast, requiring laptop LCD lighting to be throttled up to the max. Even that, it's hard on the eyes and not really appealing. A smarter choice of a different color would entirely change that. 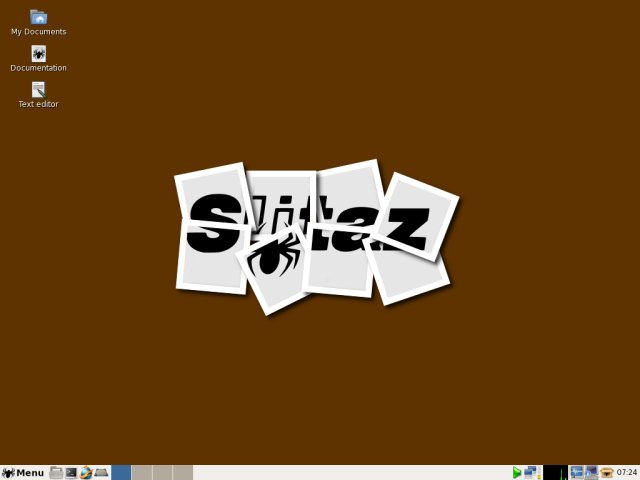 In its Mark II incarnation, Slitaz assumes a more classic desktop look, which should also make it more appealing for Windows users. You have the sound and network controls in the right corner of the bottom panel, as well as icons for the system info, task manager and the package manager. 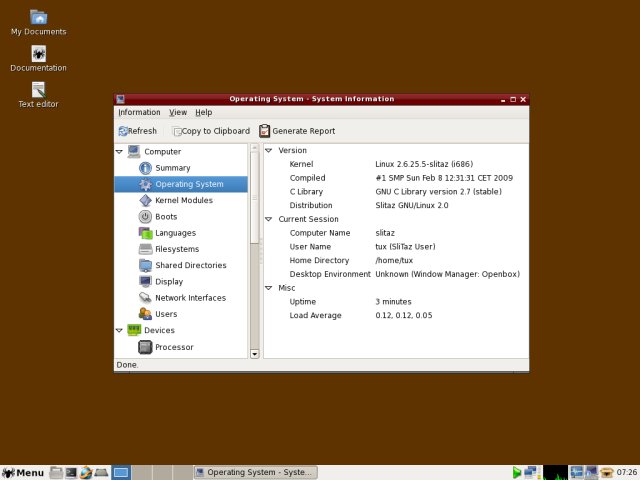 We will talk about the package manager soon.

What have you got?

30MB is not exactly the application picnic, so the choice of what gets into the default collection is a bit tricky. Still, Slitaz comes with a reasonable set of programs to start with.

Among the heavy players, you get Firefox and GParted: 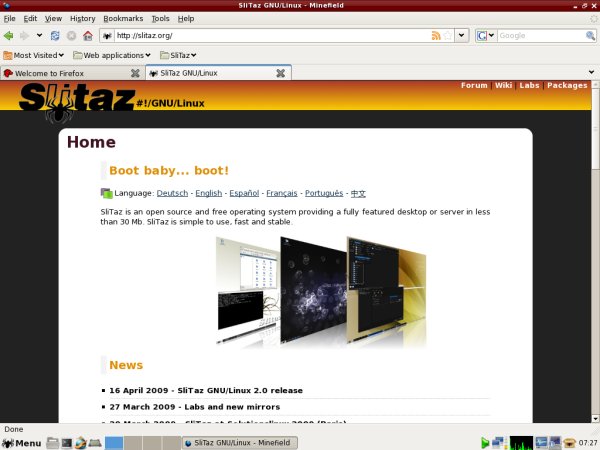 The system menu also has a rather large set of utilities available, including management utilities for devices and drivers, including Windows drivers and Wireless connections, as well as live CD and USB remastering tools called Tazlito and Tazusb. 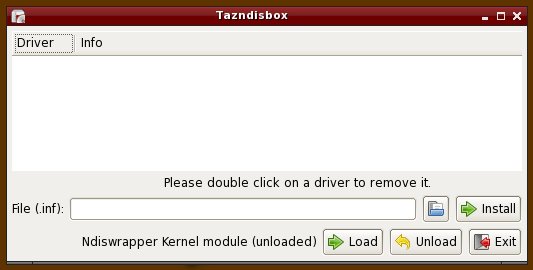 We're working in Openbox, remember? Right-click on the desktop, and you'll get the menu.

If you don't like the default selection, you have the package manager to help you get new items.

In version 1.0, it was a command-line only utility. Today, it sports a pleasant, easy to use GUI. The package manager interfaces with the Slitaz repository, which contains approx. 1400 packages. Recharge lists will refresh the list of available packages. Upgrade all will upgrade the entire distro. 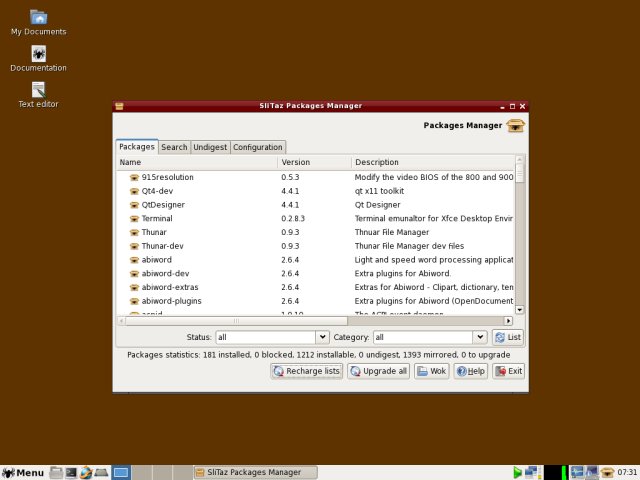 If you don't feel like browsing through the long list of packages, you can use the search function to look for individual packages. 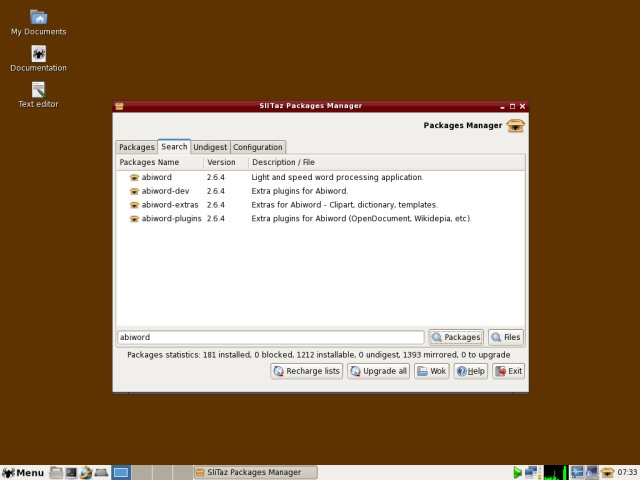 To install an application, simply double click the desired entry. If you click on Get-install, the packages will be downloaded and installed. If you check-mark the Auto install depends box, the dependencies will be automatically solved. It's rather simple and straightforward and works without any problems. 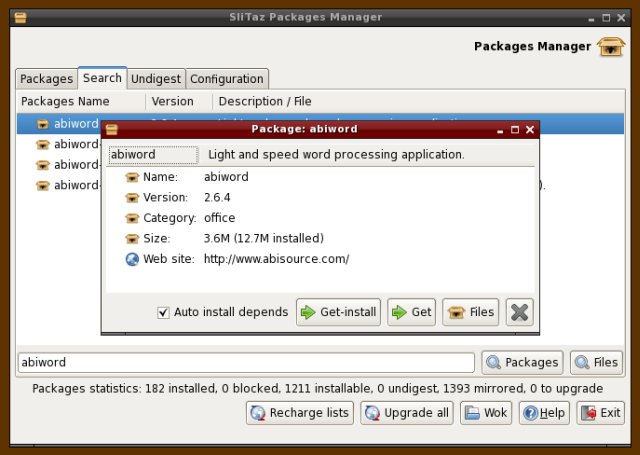 After a few moments, we have AbiWord installed, sans the spell-checker, which is a separate package: 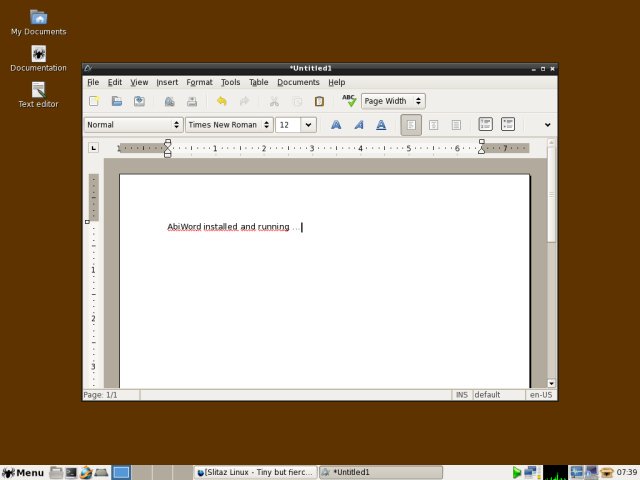 The package management is a definite improvement over version 1.0. The one small downsize is that the indexing of packages after the installation takes 100% CPU and a few moments, causing the package manager to appear as if frozen. Other than this small lag, the utility works flawlessly.

You may even want to instant proprietary software. P.S. Notice the changed background color. I think it's more reasonable than the default brown, although a soft landscape image would do best.

Last time, there was no Samba sharing utility available, so there was no way for me to connect to my Windows machines. Slitaz 2.0 does not come with one such utility installed, either, but it's now available via the package manager.

True, you won't have a fancy GUI for sharing. You'll have to use smbclient to get to your Windows hosts. No issue with FAT32 or NTFS filesystems, though.

I think placing a wrapper script shortcut on the desktop that automatically downloads the Samba package and configures a small connection utility like the one used by Damn Small Linux would greatly improve the inter-OS sharing. It could be called Windows sharing or similar. After the installation, the user would have to enter the machine name or the IP address, the share name and possibly authentication credentials. smbclient is far too geeky for most people.

Well, I had my files now and could test the multimedia support.

First, I tried the Flash player. Be default, there was none installed. I remembered the procedure from the last time I tried Slitaz. I had to install the get-flash-plugin package. No problem.

Like the last time, Slitaz refused to play Flash.

Here, I encountered a new series of problems. AlsaPlayer was unable to play my .mp3 file. When I tried to launch the Moron video, Slitaz asked me which application I wanted to use, since there was no default video player installed. 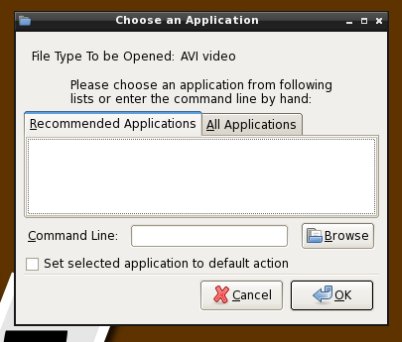 To solve the problem, I started hunting for applications that play the desired files. I downloaded MPlayer and Xine. The former exited with an error when trying to play the video file, while Xine simply refused to launch.

I think this problem could have been solved rather easily. A desktop shortcut for VLC installation, plain and simple. Or maybe gxine. It works in Puppy, no reason it should not work here.

Wireless did not work the last time. Version 2.0 as the Wireless manager, which is supposed to help user get wireless connectivity. However, if you do not have the ndiswrapper file from a Windows installation or have no idea what firmware your wireless device uses, the chances you'll succeed are very low.

I tried a number of listed drivers, none worked. The thing is, Slitaz tries to connect to the web to obtain these drivers - but this requires a network connection. So if you're on a wireless only device or have no access to a cable, you're out of luck.

Slitaz is almost getting there, but more work remains to be done.

Like its predecessor, Slitaz makes good use of 2D effects to beautify the desktop without a need for an expensive graphics card. You can enjoy shadows and transparency with just a few quick mouse clicks. There's also a number of interesting themes available. 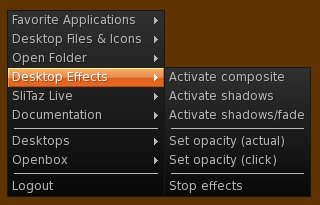 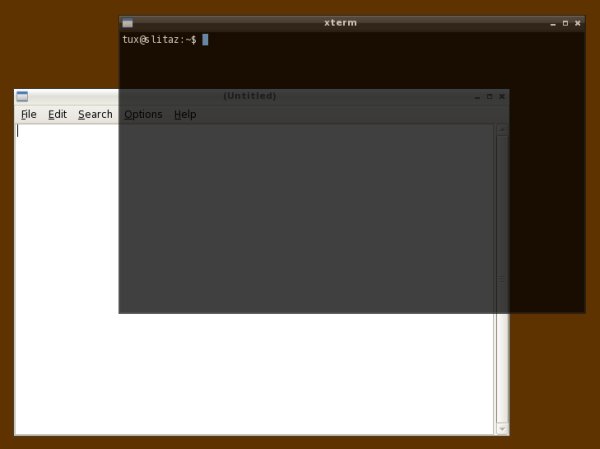 Compared to version 1.0, Slitaz is an improvement. It's more refined and polished, better looking, more intuitive to use, and simplifies a number of important system functions with friendly GUIs. Samba sharing has also been added.

Still, multimedia seems to be the Achilles' Heel of the distro, with none of my three cases working, despite numerous trials. Wireless connectivity also requires some work, as even the basic, quite old devices are not recognized and used.

If you need a lightweight, pleasant distro for quick & dirty work on low-end machines, Slitaz seems like a good candidate. Provided you have a wired connection, it will do quite a bit for you, including offering some rather exotic applications like Google Earth, Real Player, Skype, Opera, and others. But the severe lack of multimedia and weak Wireless support make it inadequate for laptops. In fact, these two elements are probably the most crucial demand of the average computer user, and without them, Slitaz simply cannot be the pocket distro in every pocket.

It's evident the developers are serious about their project. Version 2.0 is a success. While not a complete and utter victory one might expect, it marks a definite progress in the quality of this fearsome little distro. I hope version 3.0 will fix the old issues and maybe even introduce new exciting features. 25-30MB of space is a tough, tight market, with little margin for error. But that's the beauty and art of getting thing done the "small" way.

I'm looking forward to the next release. Till then, then. See you around.