Dedoimedo
A Place to Learn a Lot About a Lot
SparkyLinux 2020.03 - Strike that flint real good

A man does not need much to be happy. Maybe a nice car, loads of money, a house somewhere tropic, perhaps his own castle with fortifications and remotely operated machine gun nests, a strong family line, good food, plenty of sleep and other health-related activities, robots, and yes, a stable operating system. That's a tricky one if you be a-huntin' on the Penguin Island AKA Linuxland.

Recently AKA 2020, I embarked on Obscure Weekly (thank you Dodgeball for this fine reference), mostly testing less-known, less-popular, less-appreciated distros. This was an emotional gamble, as I found out more disappointment than aforementioned joy in my pursuit of happiness. I toned it down with some upbeat Manjaro testing, but all in all, it wasn't a tremendous start. Now, a new candidate. A new gamble. Can SparkyLinux spark my sparkle? I last tried it in 2013, and it was ... odd. Listless. Well, let's see if we can rekindle the fire. Testing the semi-rolling 2020.3 release clad in Xfce on my G50 multi-boot laptop. After me.

I grabbed the 1.3GB ISO and went a-bootin'. The desktop loaded fine. Now, pretty or amazing, it ain't. It looks like a classic 2005 distro. On its own, this isn't bad, because it's all about function not form, but then, almost universally, where be distro what looks meh its functionality be also meh. Looking about, I discovered a lot of papercuts right away. No battery indicator by default, wut. The application menu has no shortcut. In the best case, Alt + F1 opens the context menu on the desktop. The fonts are really bad. Awfully fuzzy and weak, and you will notice that no anti-aliasing is used. More to come. Of course, you also get all your internal volume shown on the desktop, because we need random stuff to make the session better. This is such a useless and unnecessary feature in pretty much all and every Xfce distro.

Okay-ish. Wireless, fine. Bluetooth, not fine. Wouldn't pair. Samba sharing works, but Thunar refused to let me drag & drop locations into the sidebar. It started copying data instead. So no shortcuts. Printing worked without any issues.

Worked fine. But I'm seeing a pattern. Like ArcoLinux, which I tested lately, Sparky gives you a semi-random and incomplete experience. This starts with the music player choice - Manjaro 19 sins the same sin, too. You get a less-than-obvious option, and of course, it works less than obviously well. Exaile, to wit. It wouldn't let me resize the different metadata columns, so you're stuck with truncated text like that. Very annoying. Especially since VLC is included! There's a reason why it's the most popular, prolific media player out there!

Both Android and iPhone 6S (latest iOS version) worked fine. The only problem is, Thunar puts the serial number in the address bar, right there. Who cares about a sequence of random numbers and letters? This is such a silly, nerdy detail that no one needs. Udev rules need fixing. But this is an ancient issue in Thunar, and apparently, it won't ever be fixed, because old problems are never fixed in Linux, only forgotten or ignored. Like the drag & drop for bookmarks or the fact Devices are shown first, and you can't shuffle the vertical order in the file manager's sidebar.

The default theme is pretty bad. There's no way to distinguish between fore and background windows. If you switch to an older window decoration (e.g.: Sparky5), it looks sooooooooo much better. It is hard to resize windows (you can't grab the handles easily enough), and some windows overflow the screen, because it seems they weren't tested on what would be the most popular laptop resolution - 1366x768 pixels. Some icons are also missing in whatever the default selected theme is, like say plus and minus signs for the screenshot timer delay. Hint: this does not go away after reboots, not even after the installation and a full set of system upgrades, or an icon cache update.

When I did add the battery indicator and unplug the AC line, it said 6.5 hours estimate on a full cell. This will be an interesting test later on. Lastly, SparkyLinux refused to open files from Samba shares. Clicking on a text file saved on a Windows machine would launch the text editor, with an empty file. Also, by default, Sparky uses LibreOffice for text files, speaking of an overkill, and opens PNG files in Firefox.

Installation - Not fun at all

Calamares typical. First, you wait about two minutes for a module to load. No idea which or why this happens every time, underlying OS notwithstanding - Arch, Debian, whatever. Then, partitioning without labels. At this point, the installer complained I've not added a mount point for /boot/efi. This is never an issue with Debian-based distros. Since SparkyLinux is Debian-based, we have an installer that is meddling and doing things wrong.

I'm confused. The installer says SparkyLinux 6 Po Tolo. I know for a fact I've downloaded the semi-rolling branch based on Debian testing, and the ISO has 2020.03 in its name even. So what gives here?

I also got annoyed during the user setup - it wouldn't let me use a simple password. It's my choice. If we're talking all about Linux and freedom, then the distro shouldn't impose silly rules. Especially since this is a single-user home system and not an enterprise server.

Remember I told you about windows height and whatnot? The installer! The very installer is truncated so you can't see the most crucial buttons of them all - those that actually let you start the installation, or perhaps cancel the whole thing. Luckily, with this particular window, this can be fixed by maximizing, but many applications with a similar problem don't obey this rule (or can't even be maximized).

After that, you get a short slideshow. Well, calling it a slideshow is wrong. It's a bullet-point list of why and how Sparky does things. Very sad. If it's an indication of what the distro can do, then it's not a good sign if the design team couldn't even bother with a couple of nice, snazzy screenshots. For that matter, why have the slides in the first place?

The installer wasn't too long, about 30 minutes - the GRUB setup included.

We didn't get the fire started

On first launch, I had Wireless. Small victories. Then, you get a first-run wizard. Finally something new and fresh! I like when distros try to help users. In this case, you only get system updates and language packs. It's a shame the project team didn't extend this to include other desktop usage activities.

Difficult. Here's what you get. Synaptic as your package manager. 2005 is calling, it wants its code back. But you also get something called APTus, a set of script that can install extra software, which you can't normally find in the repos (like say Skype or even Steam). Here, we have a non-resizable application that overflows the laptop screen. I don't know what lurks at the bottom of it. Luckily, I was able to install a bunch of stuff by double-clicking on different icons (most of which are generic ergo missing).

Each of these activities opens a separate prompt (sometimes goes under, so you don't see it), and you need to approve each one manually, i.e. hit Y in the popup terminal window, so you can't do this in a non-interactive fashion, and you can install only one program at a time. Very ... laborious. In the end, I was able to install a bunch of stuff, but then, why bother. 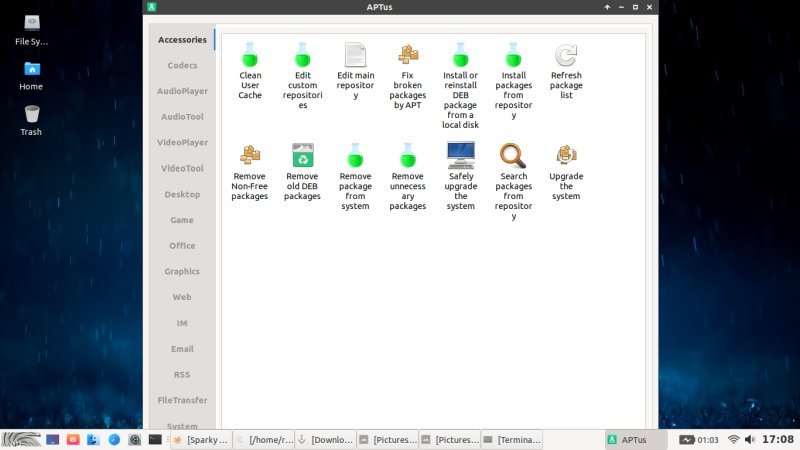 No indication what is installed, and what isn't.

By default, there isn't much. The 1.3GB ISO gives you Firefox, LibreOffice, dark-themed Cheese, Pidgin. That's about it, really. The rest is just a few handy utilities. Not a very exciting set. This makes you care for the distro even less. Feels like a chore and not an effort of love and passion.

I did install a whole bunch of stuff - why not include all this by default?

No issues. No errors. Everything worked correctly. Power management also works fine, and you get solid auto-dimming and whatnot when on battery. The sleep-and-wake sequence is ultra-fast. About 0.5 seconds. The only bad thing is a super-loud beep. I'm not sure why the klaxon is enabled by default, and why only Xfce has it.

The idle numbers are okay. The memory usage looks high - 550 MB, but the CPU ticks zero, and the distro doesn't really rev the counter much. The system is quite sprightly, and everything runs fast. Quite impressive.

Well, ignoring the ugly theming, you get about 140 minutes on 75% charge on a battery with half its total capacity, light usage and 100% brightness. This translates into roughly 5.5 hours for a brand new battery, and maybe even 6 hours with brightness level down. Wow. I will be testing this some more, because it does not feel right. If true, this would be the best result so far on this laptop. Might be the frugal Debian-ness under the hood. We shall see.

At first, I was like, nah. Won't bother. But then I decided to be thorough and do this, just to show how far you can go with a tiny bit of effort, which obviously wasn't invested in the default guise. I added a few separators to make the bottom panel look more presentable, including not having the digital clock touch the right border. Increased its font size too, and made the panel higher, roomier. I added the battery icon, dropped the silly color bar, and only left the time indicator (you need it as there's no info on hover). I installed new icons - La Capitaine, because the original set was missing quite some.

No wallpapers for you, you naughty nerd!

Nothing speaks care for detail like a broken icon theme.

I then changed the theme to Sparky5, added Ubuntu fonts, added a wallpaper - you get nothing but the default one, and the background folder returns nothing. All of this took me about 20-30 minutes, and Sparky began looking presentable. I also changed Whisker ever so slightly, and gave it a normal Super key shortcut.

SparkyLinux 2020.03 isn't much different from its 2013 sibling, my last encounter with the distro. The same good points and woes apply. The distro is perfectly functional, but it's also boring, listless and rife with small problems all over the place, including a dejectedly unappealing default looks. It's stable and super-fast and battery life is phenomenal. Strong selling points. The basics also work.

Then, you need to work hard to have a presentable system that goes beyond these basics. In the end, you can accomplish the tasks, but you need to do things in a convoluted way. Like APTus. Or the whole missing fonts, icons thingie. It's like going to a restaurant, and then the chef asks you to stir the pot a little, and do the last 17 minutes of the dish preparation yourself. Sounds like an unnecessarily strenuous activity. I would say SparkyLinux is an okay distro, but could be great if it took pride and care. Just like seven years ago, and what worries me is that this won't ever really change. On its own 5.5/10 or so, but it could be much higher. Worth testing, but there are livelier Debian-based offerings out there.