Dedoimedo
A Place to Learn a Lot About a Lot
Ubuntu is back with Saucy Salamander!

Let's go. As you remember, Ubuntu had two rather underwhelming releases since Pangolin, not included, mostly manifesting in terrible problems with the Nvidia graphics driver on my test boxes. Almost kind of made me abandon my smartphone contest really.

Well, I've managed to relax since and give Ubuntu another spin. For better or worse, it is the leading vehicle of the Linux home market boat, like it or not, take it or fake it. So let's see what happens here. No foreplay. We will begin with an Nvidia-powered laptop right away, and in the future, if all turns out to be swell, I may revisit the test on another system, which happens to have Intel graphics and SSD. Now, the good stuff.

I think I've used this joke before. Never mind, it's awesome. Ubuntu 13.10 boots with a familiar desktop interface, which is good, if you like familiarity. There are a few tiny visual polishes, like the language thingie, allowing you, for the first time EVER, to add new keyboard setups easily. All that iBus thingie, finally solved. 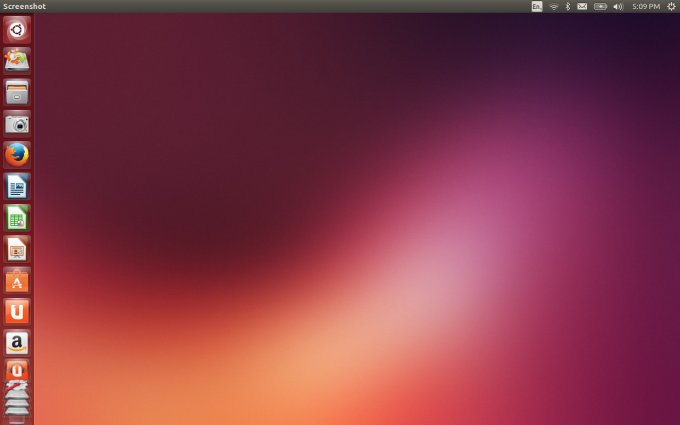 But that's only the first of many things that have been polished. While you have lost the ability to right-click on the desktop, on the bright side, for instance, the screenshot utility now accepts Enter as the input rather than forcing you to move your mouse above until you click the OK button. It also places the keyboard cursor in the right place.

The Dash has also been improved. It's better looking, more refined, more intelligent, and it comes with a whole bunch of new plugins, translating into so-called Scopes, with a huge repertoire of search and filter options. A pre-cursor to a full-blown online shop. 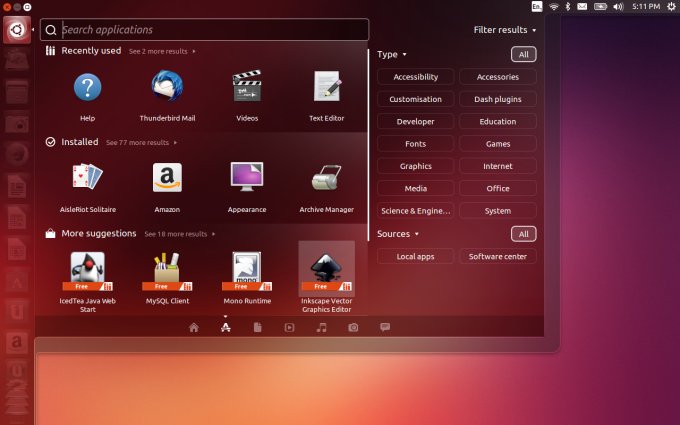 The search quality has also improved - see disclaimer below. You will get more relevant stuff, especially if you dig into the filters, which let you narrow down your needs. Quite useful, but still somewhat clunky. 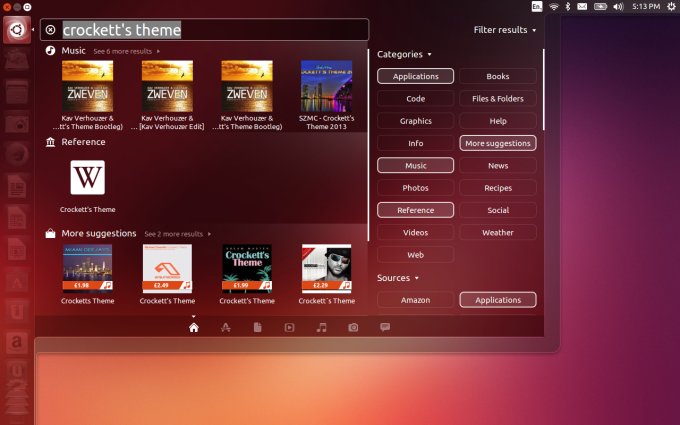 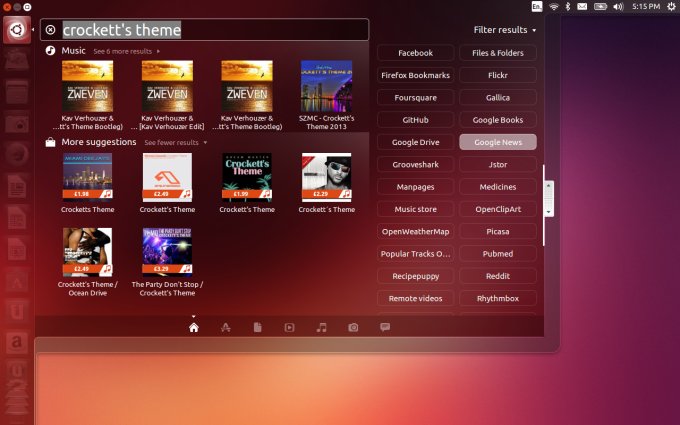 If you right-click any one item, the Dash will zoom in on them and give you additional explanations, comments, price, etc. The kind of thing that an interactive online shop would want to do. 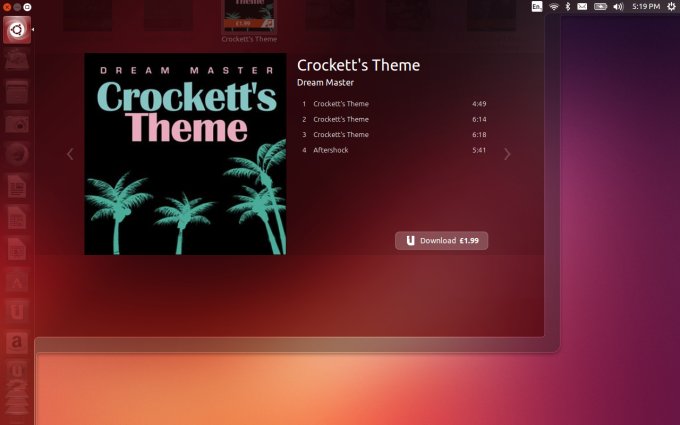 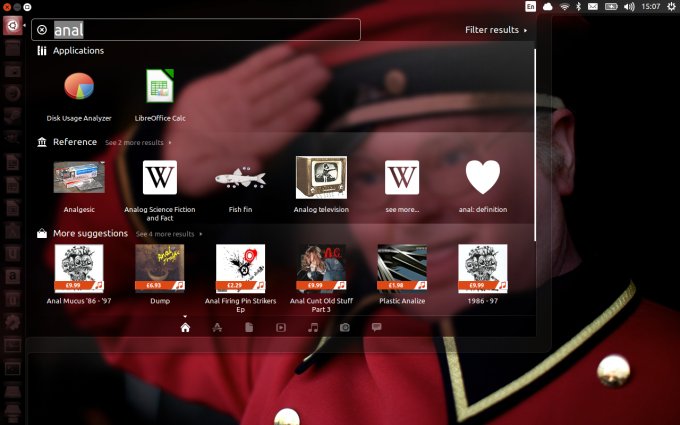 As always, you can tweak the privacy options with a single toggle, so I don't see what the big fuss in the media about evildoing and privacy violations is all about really. People do themselves more harm just by using Facebook.

Now, the Files file manager has also been reworked a little, but it could benefit from some more love. There's no point in the contextual global menu, when all it contains is just the Files sub-menu, and most of the stuff hides under the cogwheel settings button in the right top corner of the utility anyway. 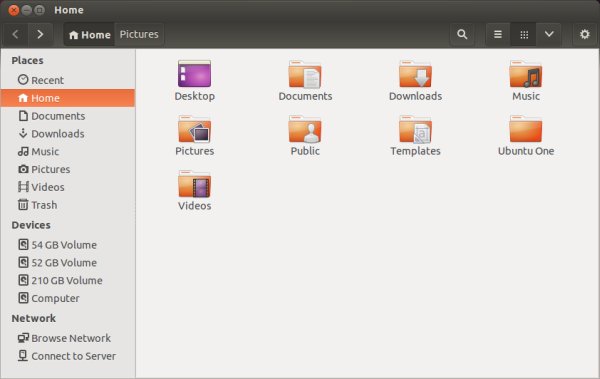 Not yet, I'm sorry. Wait for until after the installation please. 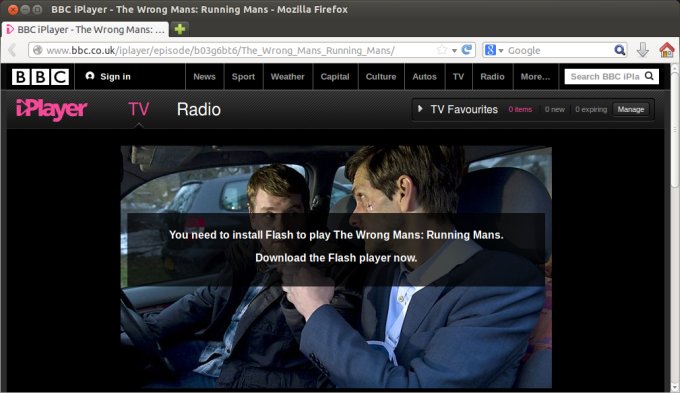 Samba behaved nicely. Wireless and Bluetooth worked truly. The only issue I did find was that, if you unmount a remote share while keeping a tab open in Files, you may get an ugly visual error that sort of corresponds to volume busy error you may get on the command line when doing the same operation. Not a biggie, but it's ugly and alarming for new users, who have no clue about these things.

The old and familiar stuff. Now, this time around, Ubuntu did not pester me with the locale, and it actually defaulted to my keyboard language. Either someone secretly read my previous reviews, or they figured out this is how it should be done, and just happens to align with my supreme intellect, because I'm always right. Or this is a bug that works in my favor.

I configured Ubuntu 13.10 to install alongside Kubuntu Ringtail on the LG RD510 machine in a dual-boot configuration. If you have any questions, then all the blue links in this paragraph should help you educate yourself. I left the older instance in charge of the bootloader.

The one notable difference in the installation process is that you can login to your Ubuntu One account while the system is being configured. This can help you work with the software center later on, buy stuff and such. If you want. 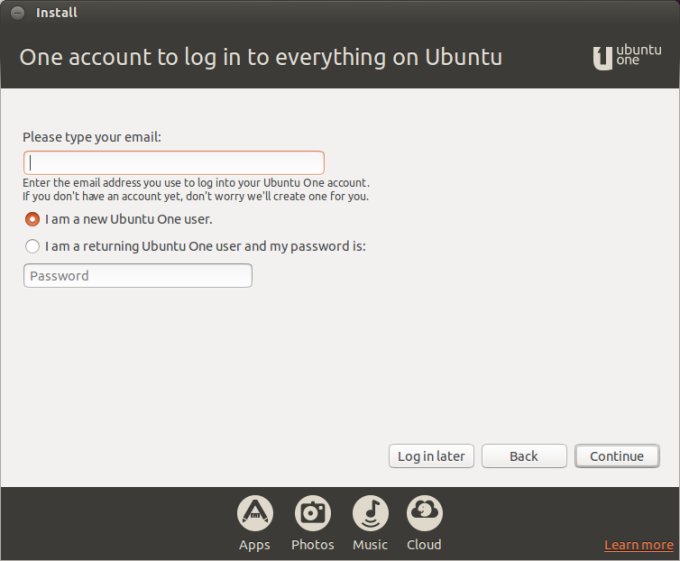 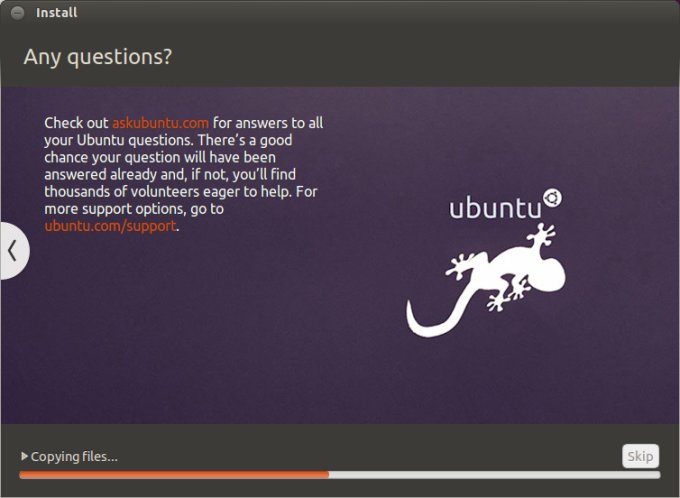 All was rather well so far, beyond my expectations. And here we are:

Now, the big one. The really critical part of this review. If we fail here, I will be giving up on Ubuntu forever. Seriously. Just remember what happened the last two times, and how much pain I had to go through to get the drivers properly installed. However, up until now everything has been satisfactory - narrate that in a German accent - and Nouveau was behaving well, the system was relatively cool and responsive, with just a slightly higher memory usage, at around 700MB. No other woes.

Like the previous two times, ever since Jockey has been obsoleted, you will find the drivers setup in an individual tab under Software Resources in the Ubuntu Software Center, as I have outlined in both Nvidia tutorials for Quetzal and Ringtail, respectively. 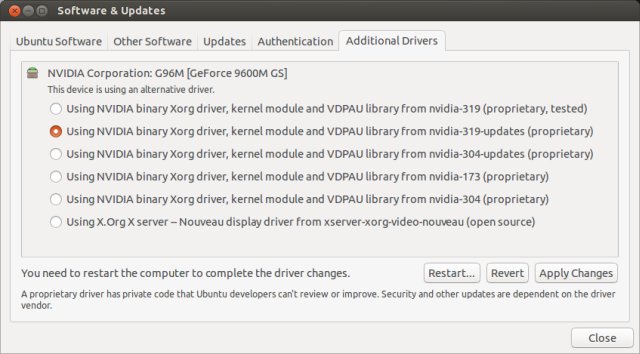 Well, I tried that. When prompted to restart, I hit the relevant button, and Ubuntu suddenly has a big error. Oh-oh. Well, fingers crossed, we wait for until after the reboot completes. Suspense, Nvidia splash, working desktop, yeah! After sucking hobo's special candy for two releases, Ubuntu once again provides smooth, seamless driver updates. Salamander does not disappoint. So far we have both Kubuntu and Ubuntu working well. 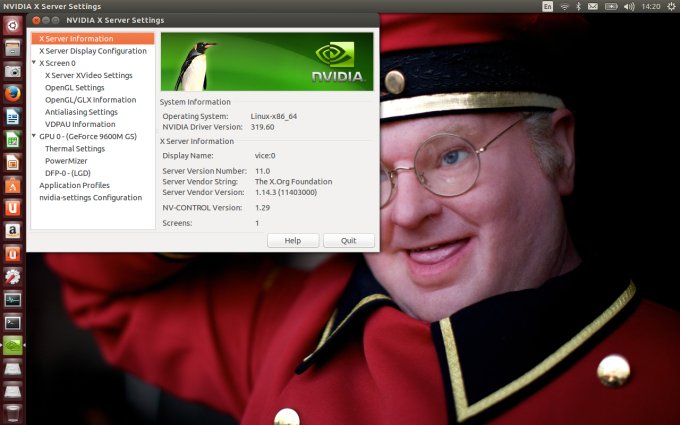 The immediate upside of this step is memory usage going down in half. Excellent. Exactly what we wanted. The desktop is quick and snappy, and everything behaves well. Cushty. Benny salutes you. I haven't been so pleased since the LTS release. 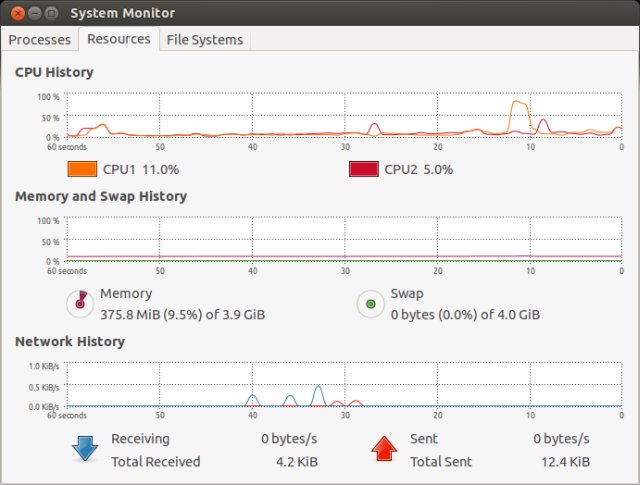 Speaking of resources, the older LG laptop is comparable to T61 in its ability to provide instant pleasure to its users, with just a slightly slower response in application loading, because it does not have SSD. Otherwise, peachy.

The usual solid if slightly boring collection that includes Firefox, Thunderbird, LibreOffice, Shotwell, and a few other interesting tools. Wacom support is there too, plus a handful of tools and utilities. But we will do a proper pimping article, akin to the series we did on CentOS, plus some specific tips on Skype, Steam and, so on. 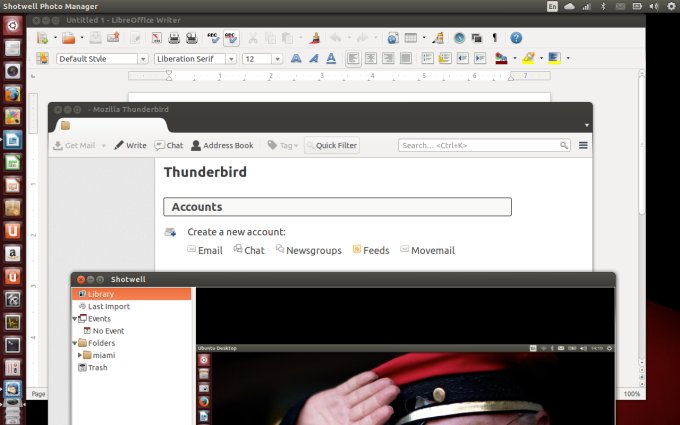 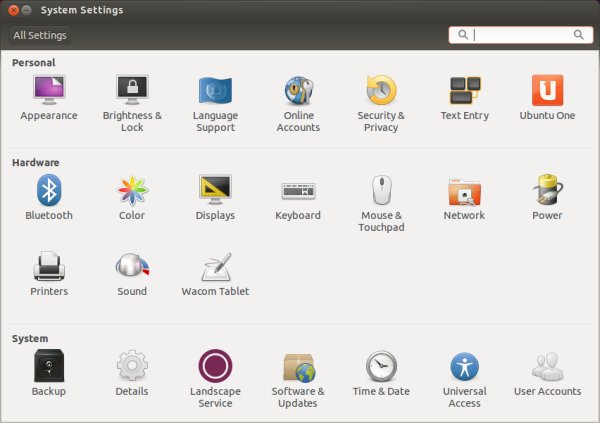 Everything is fine, we can enjoy adult entertainment online. 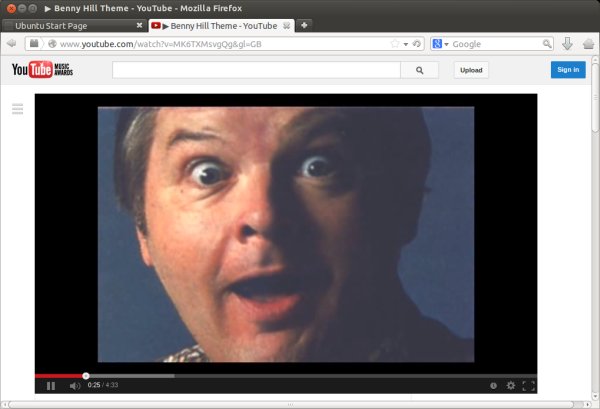 Yeah, another bug fixed. After so long, you can print to Samba shares. Kudos. 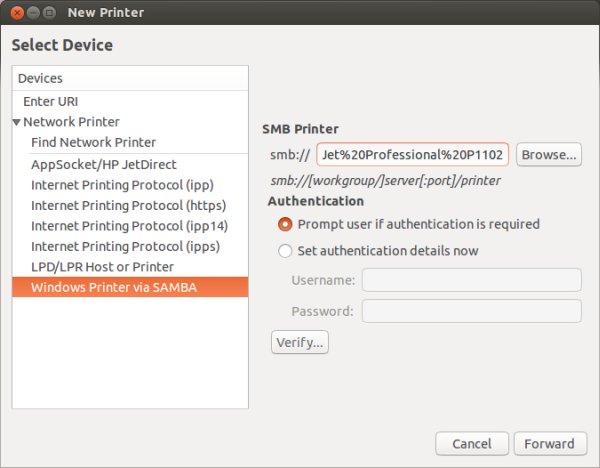 Well, except the unmount issue and the seemingly innocent error after the Nvidia install, the only other bug I encountered was during the MPlayer install. It could not load the default skin. That's all.

Well, well, well, who would have thought. Ubuntu 13.10 Saucy Salamander is a pretty nifty distribution, for many reasons. First, it fixes many wrongs, the chief among being the printing bug and the serious Nvidia foobar. Then, it polished a dozen other little issues and niggles, and gives an almost perfect desktop session. Sane, good looking, quite functional, and rather interesting overall.

I am worried, though. We're going back to the consistency thing. It seems like you can't really prepare for whatever the next version will bring. And while having a good release is always good, it kind of worries that I cannot be certain the next one, or the one after that will behave properly. A perpetual tease, and you're not sure if you might not get sued in the morning.

But let's forget that for a while, like that song Piano man says. If you're after a decent desktop, then here it is. High and mighty, it repents its sins and brings in a lot of gentle improvements. Only a few tiny niggles here and there, but nothing major. Massive. 9.8/10. Unexpected. Welcome back, Ubuntu, you haZ been missed. Anyhow, Saucy Salamander is a wicked good distro, you should definitely give it a try.