Unity 2D is the lightweight alternative to the fully 3D accelerated desktop environment used in Ubuntu. The two are virtually identical, however there's one small difference. While you can easily change the size of the Launcher, the sidebar thingie on the left, in Unity 3D, this is not so in Unity 2D. There does not seem to be a way to do it.

Now, a rather busy guy named bonzini on Ubuntu forums managed to burrow through the configuration files and find the right numbers and right changes to make this happen. Honestly, this guy deserves a medal. So let me recap what he says in the forum post, with some extra screenshots and such like. Demoed on Precise Pangolin. Follow me.

OK, so Unity 2D launcher is 48px wide, we want to slim it down, something like this; note, the screenshot with the smaller Launcher is from the 3D desktop. Anyhow: 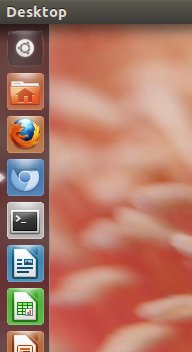 The configuration files are located under /usr/share/unity-2d/shell. You will need sudo to edit the files contained therein. You should also create a backup of all the files before making any changes. The simplest way to backup would be:

Now, you can proceed to edit the files in any text editor. The paths listed below are all relative to the Unity 2D shell path above.

Some lovely images of the change:

How do I know I'm running Unity 2D?

This is a good question and probably merits a separate article. In general, on AskUbuntu, they tell you to look for various visual clues. The Launcher icons and right-click text have no transparency, there's no shadow under the menu and such. For me, the simplest way to distinguish between sessions is to look for unity-2d string in the process table, which then indicates I'm either running the 2D version or not.

I would like to emphasize that making these changes might ruin your system, although the chances of that happening are rather remote given the complexity of the change. Moreover, the sizes and values as presented, are intended to slim down the Launcher from default 48px to minimal 32px. If you wish to try other, intermediate sizes, you can experiment with numbers and see what you get. There's a chance that some things might not 100% match, with an odd pixel here and there, so be prepared for that.

Moreover, my edition of Ubuntu 12.04 Precise Pangolin shown above comes with some extra visual polish, including new themes and icons and window borders. We will discuss those separately.

The guy named bonzini deserves a medal, seriously. With Unity 2D, you get even more speed and better responsiveness than the standard, 3D-accelerated environment, and yet, you need not compromise on beauty or elegance. The 48px size was the one thing that really made the two stand apart, as it was just too big and clunky.

This short tutorial teaches you a little bit about backup, how to work with configuration files and finally, it hints on some of the good things yet to come, namely how we can pimp Ubuntu with extra icons and themes. Anyhow, now you're all set. Enjoy your new Unity 2D looks!