Dedoimedo
A Place to Learn a Lot About a Lot
UNR 10.10 Maverick Meerkat - Don't touch this!

After being tremendously pleased with Maverick, as it ran superbly on both standard PC and even Mac, and loving the UNR 10.04 Lucid on my eeePC netbook, I figured Maverick Netbook Remix edition could only be a doubly double win for me. And so I tried it.

I decided to test the distribution on my Asus machine, having no fear my personal data would be harmed, as I have created separate root and home partitions. I downloaded the edition, burned it to a USB stick and let it boot. After a few seconds, I was looking at a whole new concept of UI and I was really liking what I saw. 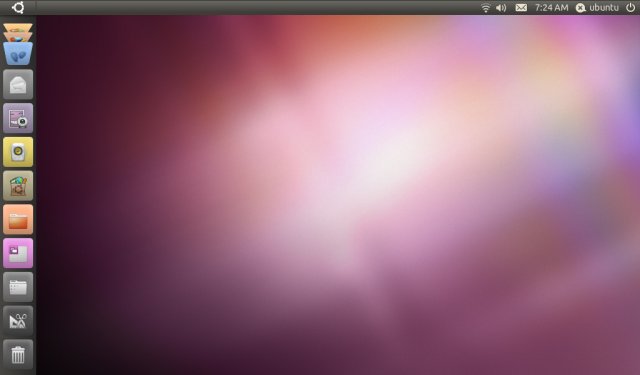 This new UI is called Unity and it is based on Gnome. It's supposed to be smart and modern and make good use of resources at hand. Now, UNR Maverick is designed to run on netbooks, i.e. little vertical space. The desktop panels placed on top or bottom encroach on the precious real estate, so we can't have that. Maverick solves the problem by shifting the panel to the left.

It's a fairly smart gadget. The panel is kind of a scrollbar, which you can slide through using the mouse middle button. You won't see any window icons pop up, but there will be a little dot to indicate open items. This is more like Mac or Macbuntu, although the rectangular arrangement of icons reminds of Windows 7. Furthermore, if you move the focus to one of your open programs, the icons will stack up nicely Rolodex-style, which adds a posh feeling to your desktop experience.

Another Mac-like feature is the context-like file menu in the thin top panel, which changes functionality based on your open application, so again, more vertical space is saved by integrating existing elements into a single static workspace rather than creating more and more ribbons. If the tabs-on-top concept ever had merit, it's on netbooks, manifested in this manner rather than the classic browser approach. 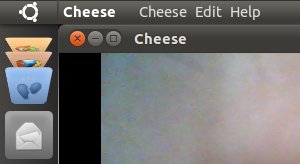 However, Firefox, still not at version 4, suffers from the unremovable File menu, which remains in all Linux versions. This visual inconsistency mars the overall integration. 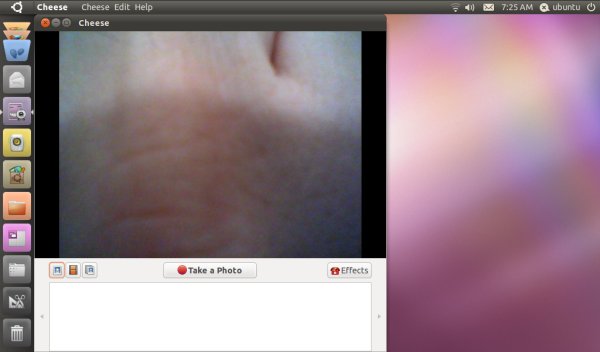 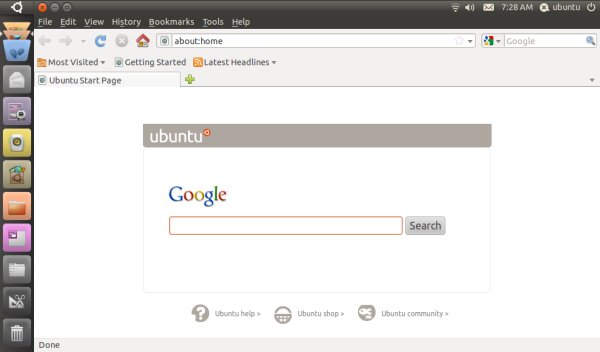 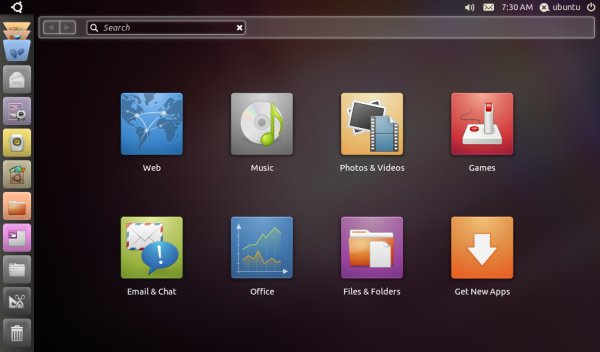 Change the desktop background and you feel like Steve Jobs is stroking your hair, in a very corporate, non-intimidating way. 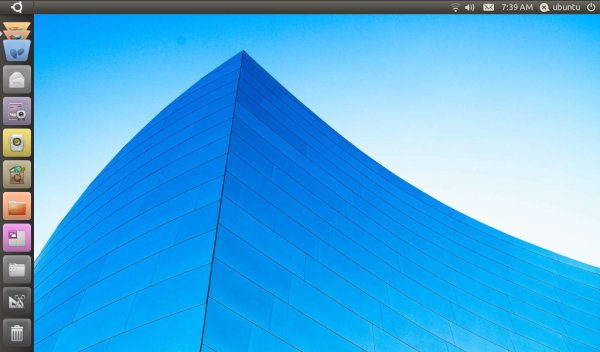 And then, the nightmare begins

And then, you try something innocent like selecting more than a single file. Right-click, Ctrl button, nothing. Right-click, nothing. How do I delete this image I just took? Oops. How do I access my network shares?

Hop into the Files & Folders window. Lovely, cool, Ubuntu Software Center style, with integrated search. Very modern, but very impractical. You cannot drag & drop your files, you cannot select anything, really. Everything is single click. Your mouse feels like a crippled little rodent. This worked well for Moblin and MeeGo, but they have been designed to be different in the first place. After trying Ubuntu Netbook Remix in any one of its former flavors, you'll find the interface completely baffling.

No network sharing, no way to drag & drop files, no way to delete them, no way to select more than one file, no way to add your favorite applications to any kind of favorites menu, no way to unselect your choices.

And then, UNR Maverick blessed with Unity decided to freeze, stutter and throw ugly errors, the kind of which I've not seen in more than a year with any Ubuntu release. And not very helpful, I must admit. I don't know what Mutter is. Second, how is the average user supposed to know if they have been doing anything confidential that might somehow hurt their privacy? Is watching an adult movie considered confidential? Oh, Unity! 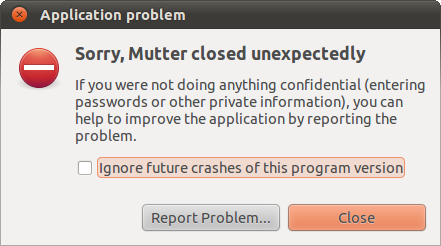 Now, I read reviews here and there and some people seemed to have had more success with this edition, including being able to do some basic stuff you would expect; well, parts of it, at least. This means I'm either: a) moron b) out of luck. I choose the latter.

I logged out and tries the classic Gnome (Desktop) session. It looks like normal Ubuntu and everything works. You can molest your files, you can select more than one, you can right-click on them, you can drag them around. Samba sharing works. The only downside is that you have the classic looks. Not a downside by any means, but the whole idea of using the Remix edition was to enjoy something a little different and maybe more efficient. For example, comparing the standard desktop and the UNR Lucid, on a 10.1-inch screen, it's obvious which one looks more practical and appealing. 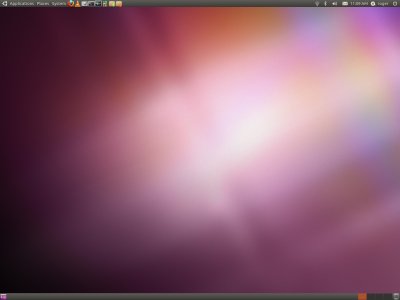 The moment of choice

And then comes the critical moment. Should I choose this new thing, which looks lovely but won't let me do anything. Sorry, let me rephrase that: won't let me do anything except what an average person with IQ 92 would do, which is download files without ever thinking about them, single-click my way through exciting new stuff and chat with my imaginary friends on social sites. So should I?

Or, stay with the perfectly functional LTS release, which will serve me for the next three years, looks and behaves properly, has everything I need and then some, throws no ugly errors, and offers an exceptional performance? I think the answer is obvious.

Now, some say that Unity is going to be the default shell for Ubuntu 11.04 rather than classic Gnome or Gnome 3 or Gnome Shell. This is a very controversial decision and it is going to make a lot of users unhappy. Not all is lost, though, Gnome stays and you'll be able to use it instead of Unity. But still.

Don't get me wrong. I'm not doing a Salem Witch Project here. I'm not calling for good old medieval ages to return. No need to revel in the glory of Windows 95. But Gnome is far from being ugly, archaic or impractical. In fact, it is very practical and it works. Unlike Unity, which except looking very decent did nothing. I guess even the most shallow users will agree that you need some basic functionality at the end of the day, somehow, somewhere, just a bit.

Look at the Mac people. They still have a right click and you can select more than one file at the same time. And I'm talking as a netbook user, not as a linuxoid. Damn.

UNR 10.04 Lucid Lynx is fast, sexy and useful. It plays popular media, suspends and resumes in a blink, has an eon of battery life, interfaces smoothly with all kinds of network shares, printers, gadgets, and whatnot, allows full customization, allows decent multi-tasking, and does not play any foul games.

UNR 10.10 does none of this except being sexy. You may eventually get it to do all kinds of pretty things, but you will be isolated in a virtual world, where your entirely experience is limited to online. Why plug in a USB drive or connect to your second box via Samba when you have Ubuntu One to share files? Why delete anything, after all, we're in the era of information. Why bother where your stuff goes, use the inline search? Right? Wrong.

I wholeheartedly recommend Lucid Lynx for your netbooks. And it will be fully supported until 2013. But UNR 10.10 Maverick Meerkat is a flop. It may be a revolution, but I'm one of the victims, left bleeding in the ditch, covered with an old newspaper.

It's amazing how good the desktop edition is compared to this. Really stunning. I really wonder where all the decisions come from and how they all blend. Using the distro name alongside the UNR badge does the autumn release a disgrace. Purrty and evil.

Stay away from UNR 10.10. If and when I miraculously discover how to tame this beast, I might update you, but the first impression is one of impotence and despair. Don't touch this. Dedoimedo out.