Roughly 25 years ago, I remember playing Panzer General for the first time. The game's hexagonal-map, turn-based, inventory-and-strategy style grabbed me instantly, and became one of the enduring classics on my proverbial digital shelf of good ole antiquities. A few days ago, I fired up DOSBox and had another go at Panzer General. Not sure what prompted me to play it again, perhaps inspiration following a recent bout of reading military history books on Stalingrad and Berlin, or perhaps a big-boy-toy warehouse management OCD itch that lurks in every grown man. Or just the fact it's a darn good game, and it's time to play it, enjoy it, review it.

It may sound unusual talking about a 1994 game title - but hey, classics be classics. I did mention it in one of my DOSBox compilations on old game revival, but now I want to give it a proper, in-depth review, even if most of you won't be able to play it, or even find it. Besides, it's a trip down the memory lane. I don't remember the full journey, but I did preserve the game and its save files carefully over the years, from floppy (maybe) to CD to DVD to a folder on a disk, which could be mounted and summoned at will. My original game saves are there, most of them, the earliest dating back to 2000, and the newest to 2007. So not only do I get to have fresh fun, I also have a glimpse of my own military cunning two decades removed. Well, let's blitz. 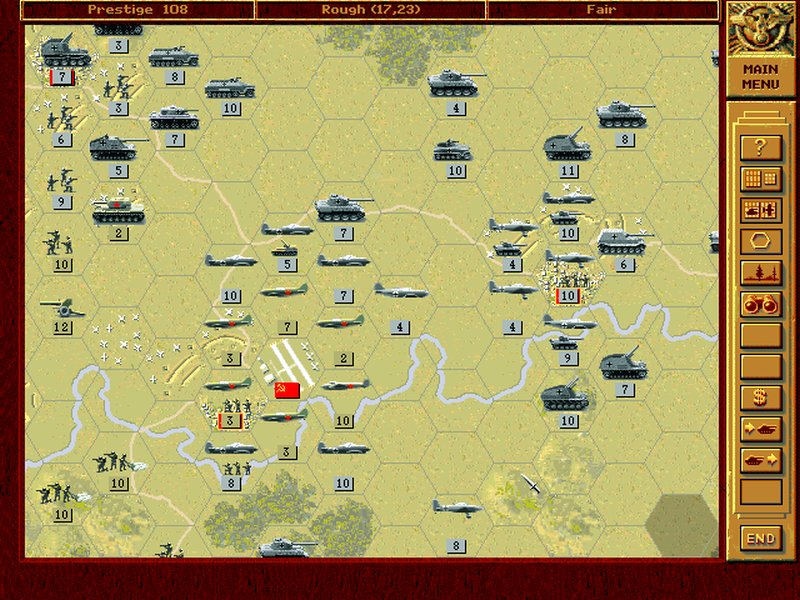 Like many games created in the era of computing austerity, Panzer General places focus on quality over quantity. It's not about amazing animations, it's about realism and wit. The game interface is fairly simple. Game maps are made of hexagonal tiles, and you can move your units - air, land and sea - within permissible distance, terrain and weather penalty included. You take turns positioning your units, each one supposedly a battalion or a regiment, and then fighting the enemy. And this is where it all gets magical.

Panzer General puts great emphasis on the modern combined arms methodology of warfare, as it developed throughout WWII. You units have their offensive and defensive strengths, as well as initiative. So if you send a unit of poorly armed infantrymen against an entrenched company of engineers backed up by artillery, you're probably going to lose. But the same unit in a forested area may offered dogged, rugged resistance to enemy armor. 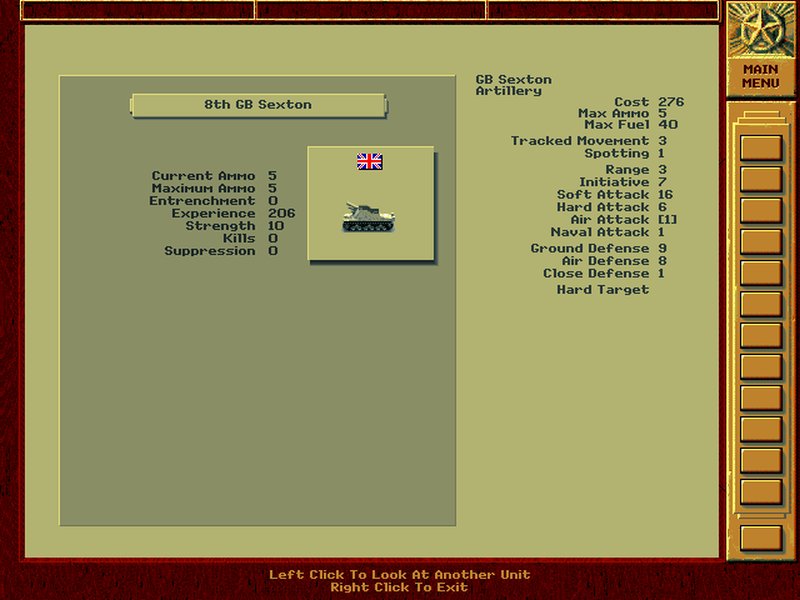 Unit statistics are important - pay attention, because they determine how you can effectively deploy your army.

You can also practice the doctrine of fast-moving warfare in Panzer General. In fact, you should. Leave hard-to-kill enemy troops surrounded, so they cannot resupply or reinforce, flank them, and them move deep into the enemy territory. Each objective you seize gives you prestige, which then allows you to buy fresh units. You can also seize airfields using paratroopers, or you can suppress enemy rear supply depots with strategic bombing. For example, B29 bombers might not be effective in fighting tanks in the open, but they can carpet bomb key positions, causing your foe to lose prestige. 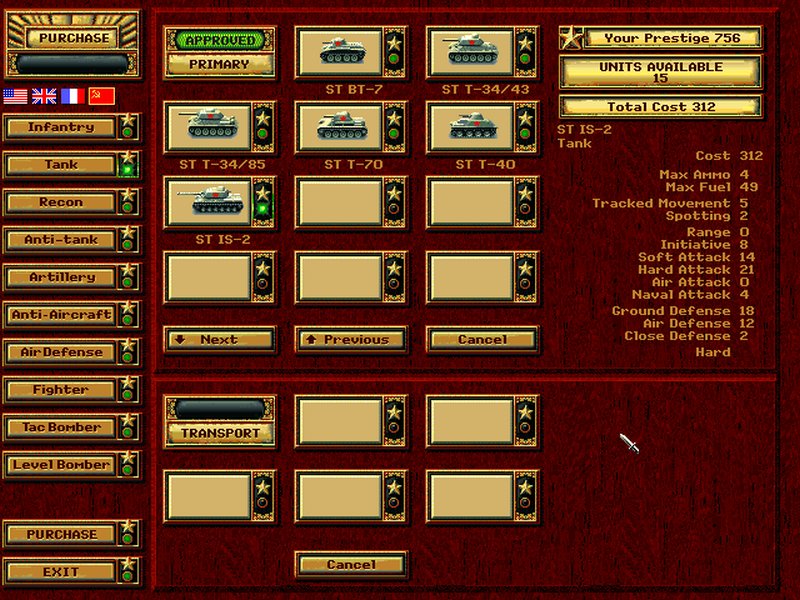 But it gets better. Bombers and strike aircraft on their own are vulnerable to fighters, so you can escort them with interceptors. Similarly, you can place combat air patrols over your cities, and augment them with flak batteries. Infantry and towed artillery units can travel on their own, for short distances, or you can equip them with transport, which gives them greater range - but also costs more and often makes them more vulnerable. When it gets rainy and cloudy, planes will not always be able to take off, so if you're counting on air superiority, the weather can be a significant, unpredictable factor. Mud and snow will cause your offensives to stall. Similarly, fording rivers takes multiple turns, unless you have engineering units that can lay pontoon bridges. Mountains and forests are less passable than open land with paved roads. 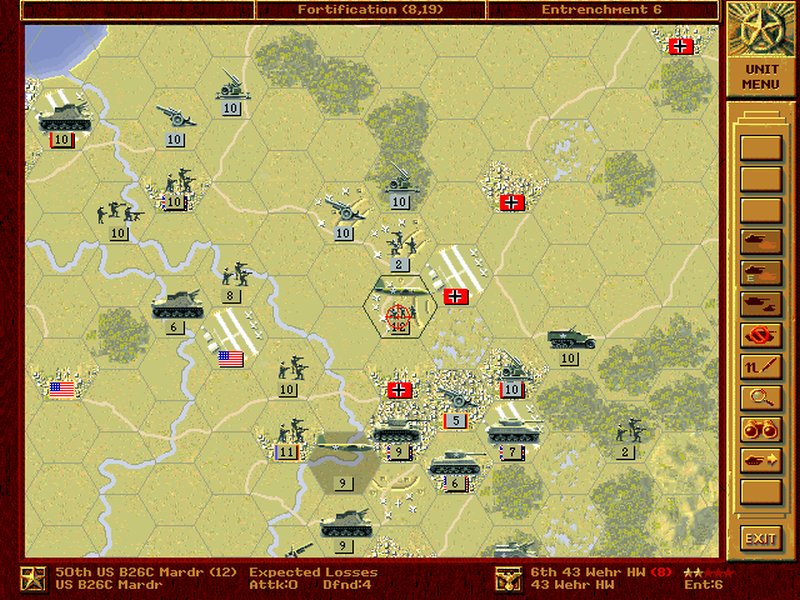 You have to plan your turns carefully. For example, HE162 has definite superiority over La-7 fighters, but notice the self-propelled AAA. Next turn, they might destroy the jets.

Your combat units gain experience as they fight, especially if they come out victorious from an engagement or survive persistent waves of attacks. You can bolster them with elite reinforcements so they don't lose the hard-won experience. Sometimes though, your units may surrender if badly mauled and with no hexagon left to retreat. Surprise and chance also take their toll. You could find yourself ambushed, or a seemingly favorable fight could suddenly turn against you, with the 7:1 odds you were expecting reversed.

Panzer General aims to be accurate - and this impacts how you plan your battles. For example, the German armor in the latest stages of the war is very hard to kill, like Tiger I, KingTiger (Tiger II), Panther, or JagdPanzer. So you will often need tactical fighter bombers and lots of artillery to soften them up. Similarly, Me-262 and Me-160 pose a great threat to any Allied fighter, and your best bet is to attack them with anti-aircraft units whenever you can. On the other hand, if you stack up the defenses of your cities right, they are very hard to defeat, too. Usually, this means a flak unit in the center, two or three artillery units right behind, and armor and infantry in the front. Anti-tank cannon work well if entrenched or hidden - they are extremely vulnerable in the open. 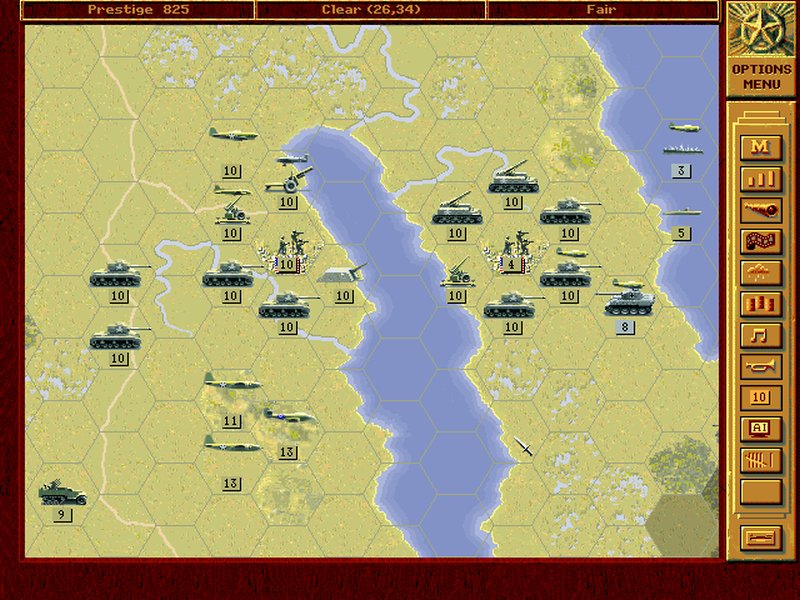 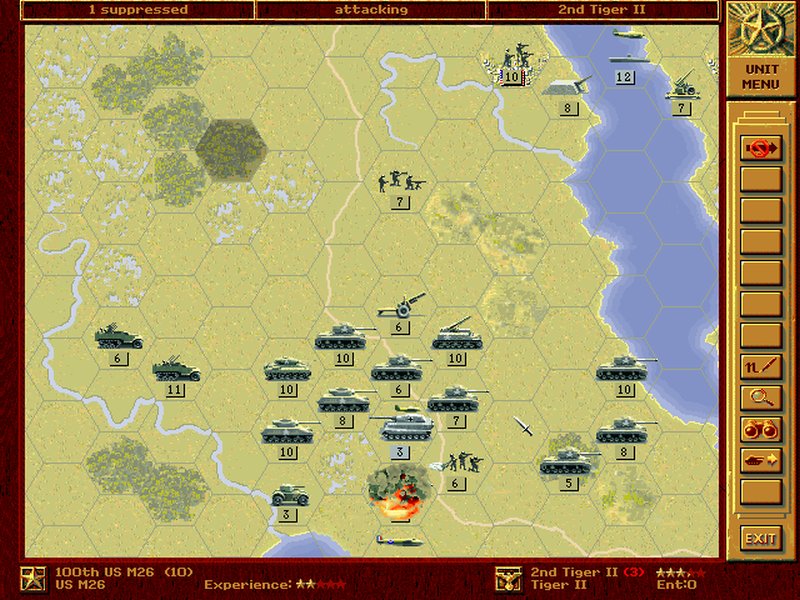 Tiger II is a beast, but with enough tanks and artillery, you can defeat it.

You also get ships and submarines! You can embark your infantry and armor onto sea transports, but they need protection. In some of the scenarios, you will have battleships and cruisers, which can be used for naval bombardment from a great distance. Realistically, the ship guns will be most effective against other vessels or soft targets on the ground. Beware, submarines can sink your fleet! But if you have torpedo boats or destroyers, you can send them on submarine hunts, although often as not, the submarines may evade your ships. Aircraft can also attack naval targets. You are well advised to protect them, because unlike land or air units, you cannot buy any new ones (only very slowly reinforce them in ports). 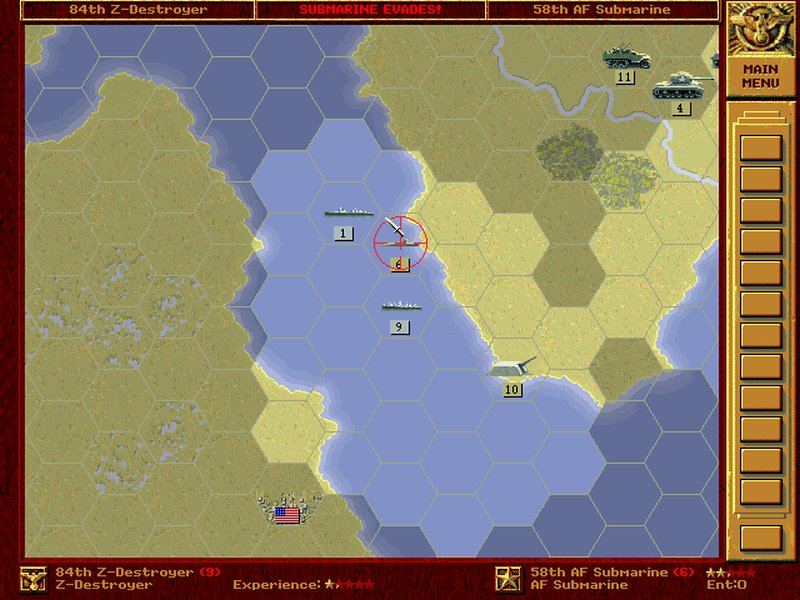 If you're after an arch-plot, you may want to try one of the six available campaigns in the game. You play as an Axis commander, although you only control German units. You can choose the Poland campaign in 1939 as the earliest, up to the Kharkov offensive in 1943. Each period reflects the reality of the war, with different weapons and odds. As you can imagine, the later campaigns are more difficult. Now, if you don't fancy this, you can play standalone scenarios stretching from the earliest WWII operations to a fictitious engagement around Washington in June 1945, where supposedly the war spills over onto the American soil. Here, you have the option to take control of either the Allied or Axis formats - or curiously, both! You can also pit AI against AI, purely for entertainment purposes. 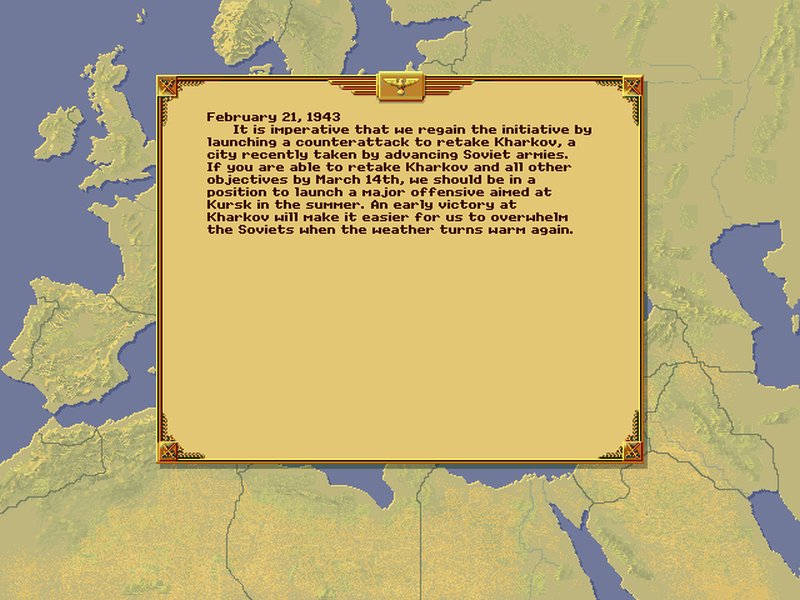 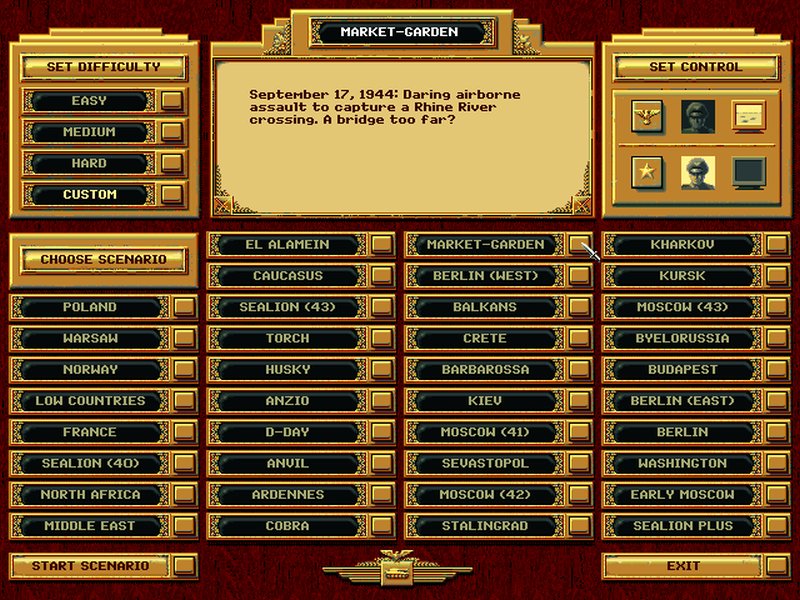 That's a nice touch, that line up there.

Some of the operations are based on real events, while others are made up, like Sealion 1943. Each scenario has a finite number of turns. Axis always starts first, but typically, the Allied player has more prestige and greater reinforcements. Axis is restricted to German technology only, whereas as Allies, you also get Soviet, British and French weapons, which adds variety and makes the game even more enjoyable. In some of the scenarios, you may get a small number of premium one-off units. For instance, you have the powerful, highly-skilled (GB) Meteors in the Washington scenario, but you cannot buy any new ones unless your British para units conquer an airfield, so like the ships, they must be used with great care.

Speaking of Meteors, the scenarios vary greatly in their difficulty. Some favor the Axis, while others favor the Allies. Washington is meant to be tricky, but it's actually super easy if you play it as the Allied commander. One, the Meteors are superb, and they can easily destroy entire air units, including the latest German fighters. Two, there are several critical chokepoints on the map, so if you reinforce them well with artillery and armor, the Axis stands no chance. In Torch, a tiny handful of German units face an onslaught of British and American troops, including an aircraft carrier task group, and a dozen fighter and bomber wings. Curiously, playing Berlin as Axis is easier than you'd expect, and it's actually the West front that's harder than the Oder-Vistula defense line. 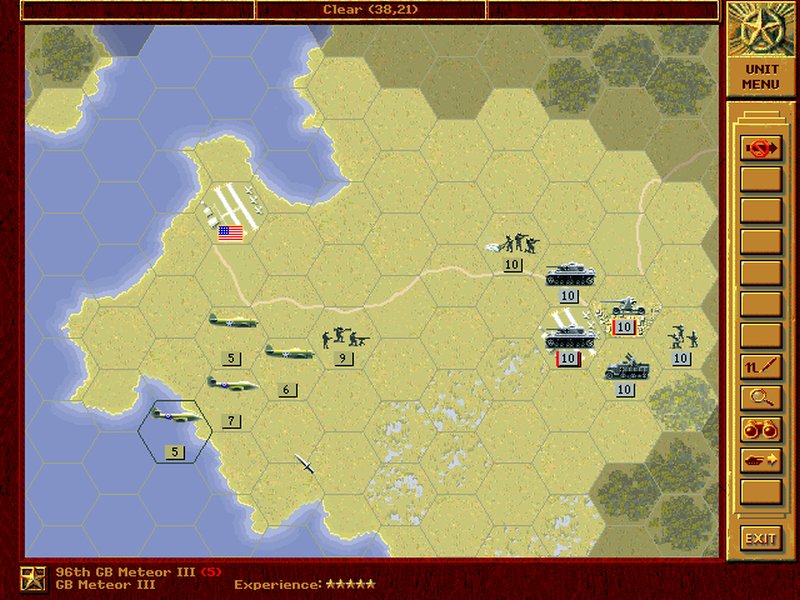 GB Meteor III is the best overall unit in the game, but you only get it as an unbuyable bonus in some scenarios. 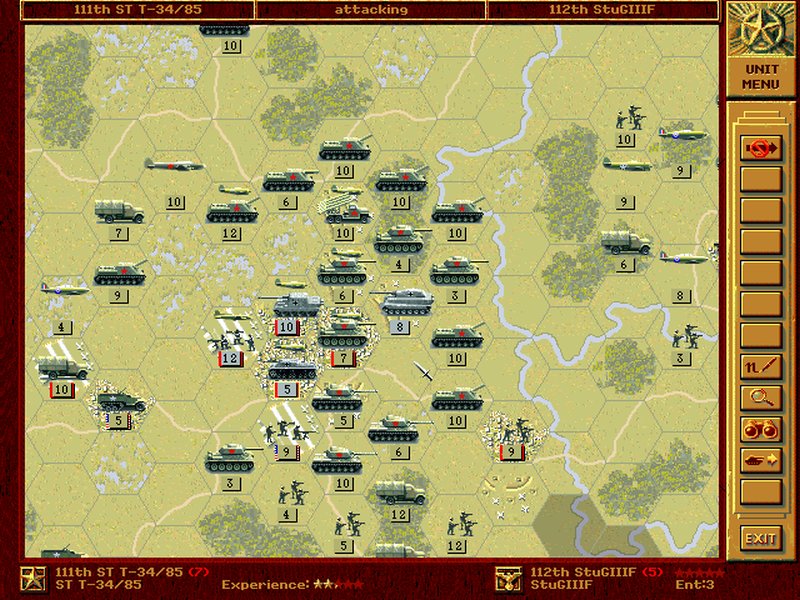 Somehow, I managed to replay the Berlin scenario almost to the letter. 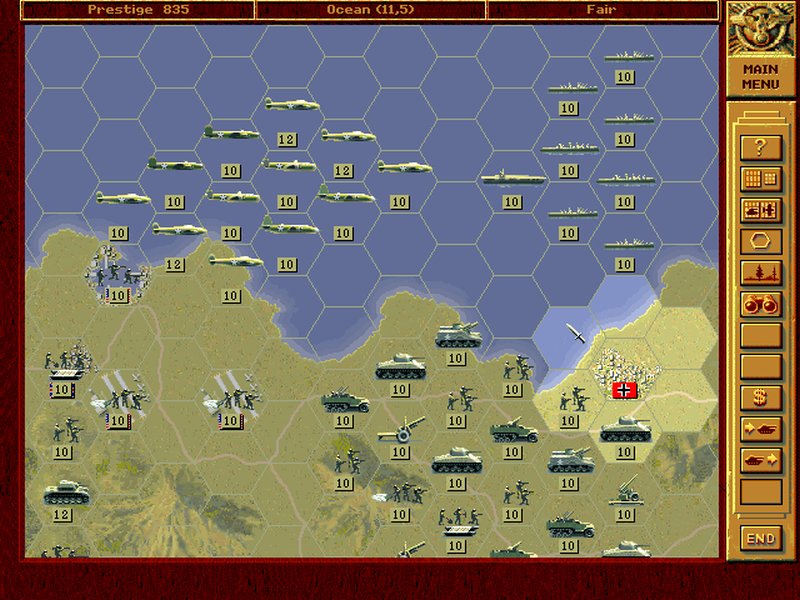 Playing Torch as Axis is hard - the Allies come with overwhelming air and naval power. 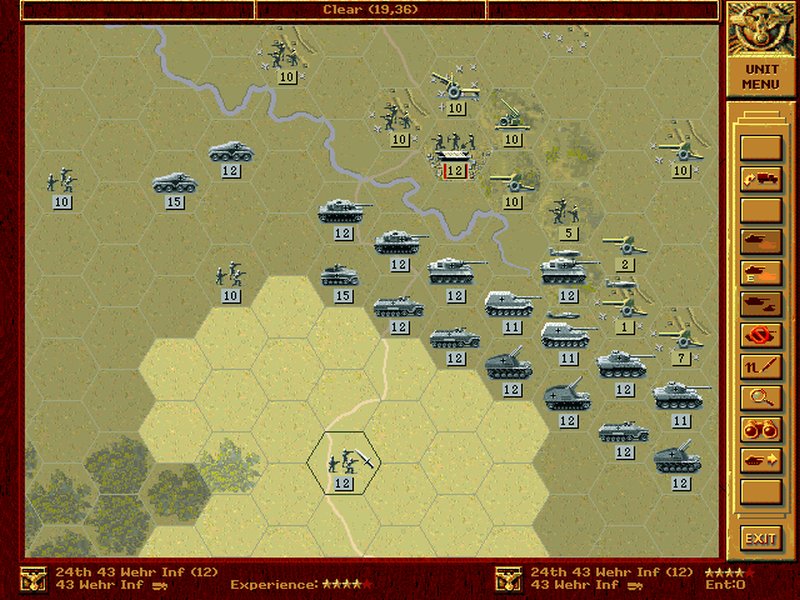 The famous Kursk battle - worth playing both sides to figure out the best strategy.

You can tweak the difficulty as you like - prestige and experience, plus whether your AI foe uses enhanced intelligence to plan its moves. If not, it will often charge blindly into battle, which can sometimes be fun if you're after some casual gaming fun. Many other aspects of the game can be turned on/off, like hidden units, weather, supplies, battle animations, sound and music. The one thing you can't really disable is the 3-4 second time it takes for any engagement to finish, so it can sometimes get a little tedious. P.S. Animations make them even longer, so you may want to disable them, and you best do it by starting a scenario as an Axis commander, even for the sake of it. This way, when you do you play as Allies, you won't spend 20 minutes waiting for the first turn and its associated animations to finish. 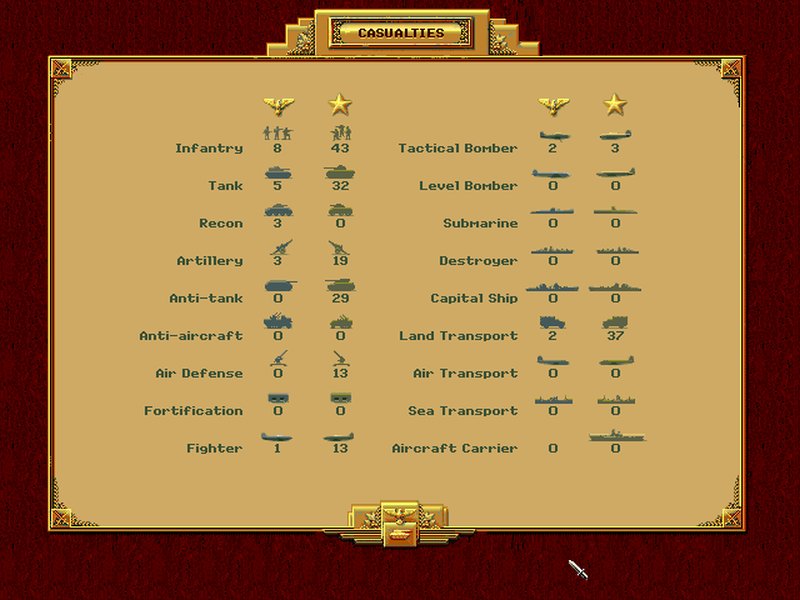 Twenty five-ish years on, my impression of this title hasn't changed. Well, it has. The game is even better than I remembered it! And I also got better at it. I loaded my old saves, and compared my progress, and it seems that I'm applying the combat doctrine far more effectively than in the past. I guess all that military history reading has paid off. It also shows the brilliance behind the simple, spartan design that went into Panzer General.

Indeed, the game graphics are fairly simple. After all, we're talking 1994. And yet, you get a very clear sense of what's happening, and you can identify all units rather accurately. The hexagonal layout actually adds to the overall feel, and it proves that you don't need any fancy 3D stuff to have a clever, smart game. You have to manage and move maybe a hundred different units every turn, make sure you don't outstretch your own supply lines, provide support for your armor and artillery, and carefully plan each engagement. This formula is software independent, which is what makes Panzer General so timelessly fun.