Dedoimedo
A Place to Learn a Lot About a Lot
My SimCity 4 region is complete!

SimCity 4 is a superb city building simulation, quite likely the best ever made. Not only does it allow you total freedom in your design, individual cities in a given region all become interconnected, creating a metropolis. The more complex your road network and industry, the better. You'll have people traveling to other city parts for work using your rails and ships and aircraft. It becomes one huge complex grid of agriculture, tourism and urban planning.

Some three years ago, I set to build my San Francisco region from scratch. It's the same one featured in the game review. And now, after three years of hard work, the region is finally complete. Rather than just building huge blocks of buildings without any regard to the topology, I carefully nursed my project, so that it would as real and yet as aesthetic as possible. In this article, I'd like to take you for a tour through my city region, populating 4.2 million citizens in 68 districts. A work of art, if I dare say. Follow me. 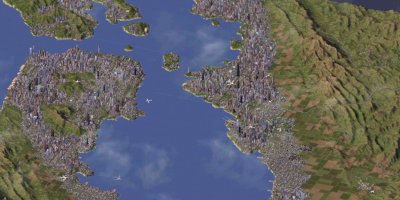 The city region is huge and does not fit into a single screenshot. So we will have municipalities.

The city hotspot is in the central part of the map. There's the west island, mostly populated in its north part, with a long industrial lip toward the bay. The east board has a long coastal city strip, backed by a checkerboard of farms that curl into the the foothills of a long, diagonal range. Most of the industry and agriculture is centered in the southern part, with posh skyline and stock market more to the north. 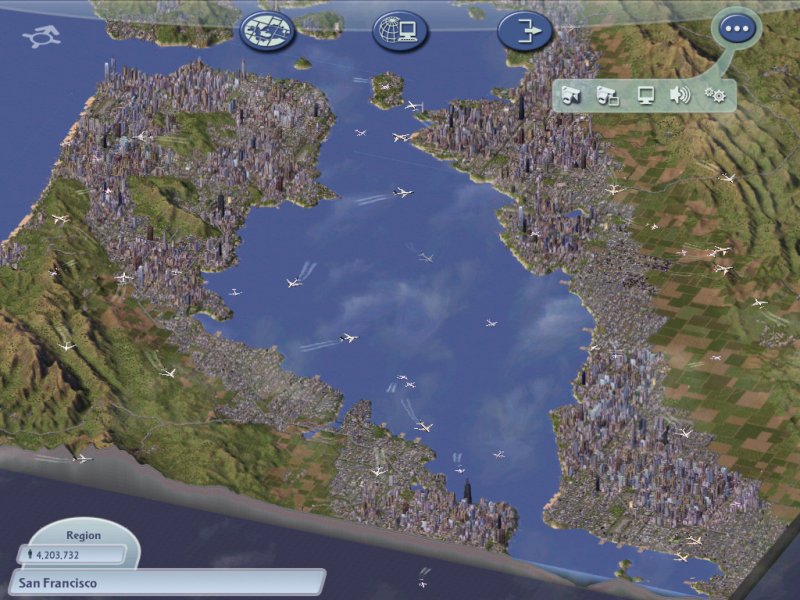 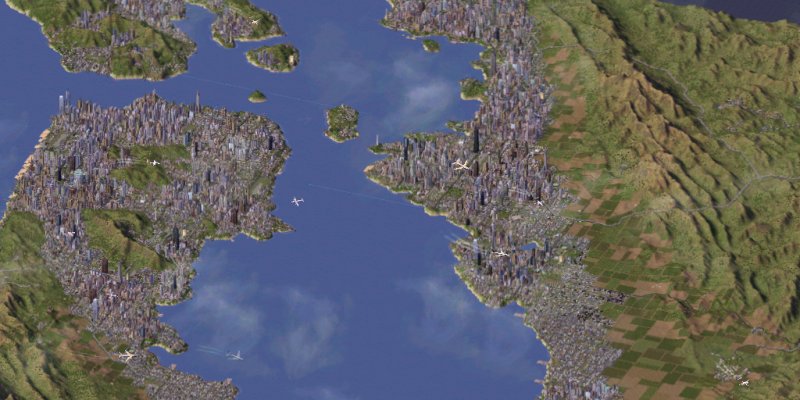 In the north corner, you have a scattering of islands and a large mountain ridge, hugged by some urbania and no agriculture. Just opposite the large island, there's the rich urban center of the eastern part. Further south, the flat land opens and farms dot the countryside. On the western island, there's a thick clustering of skyscrapers, with city's borders following the terrain. 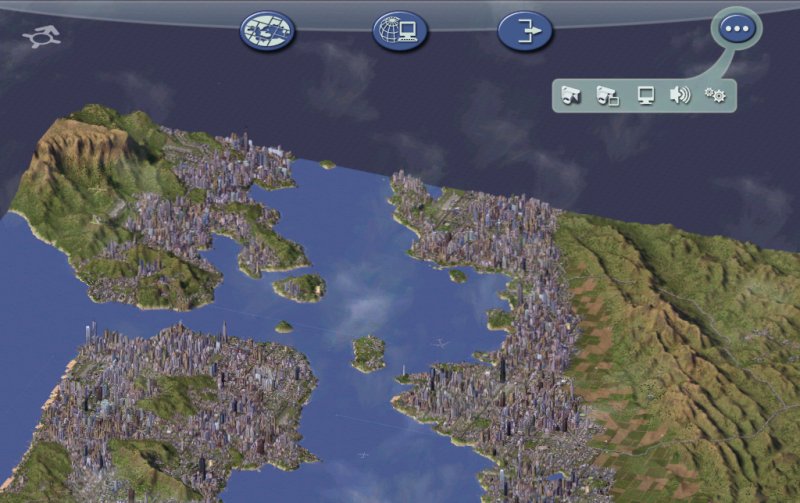 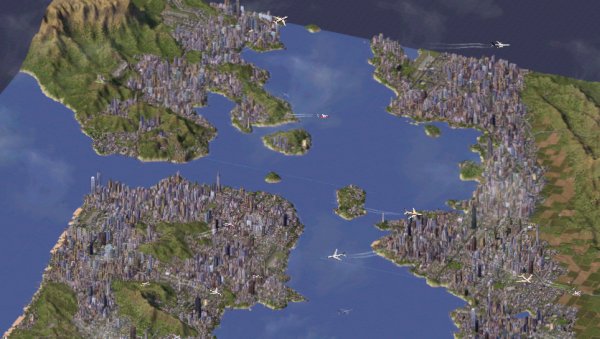 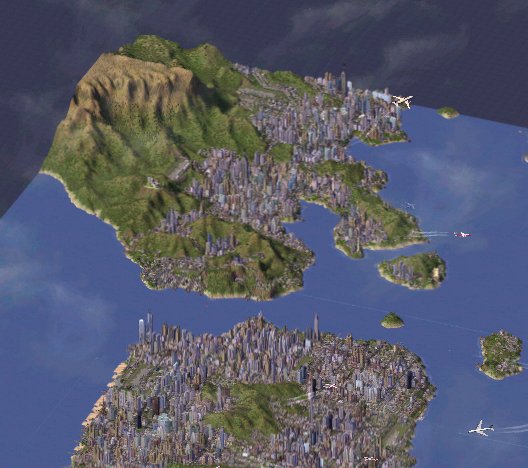 Speaking of the south, the area is mostly uninhabited, because of the hilly landscape. People live in the north and further down the map, there's some farming and low-tech industry. Citizens on the far west side enjoy the clean sea and long sandy beaches, separated from the pollution by the hills at their back. A small industrial center lurks at the very edge of the island, with a network of rail and highway tunnels burrowing through the hills. 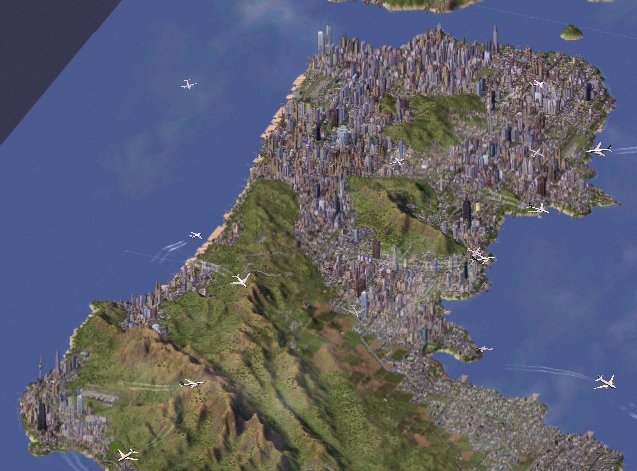 The south itself is flat and almost entirely dedicated to factories, research centers and endless acres of wheat and maize. The shore is dotted with ship quays. The bay narrows see a lot of shipping activity, but it's mostly industrial. 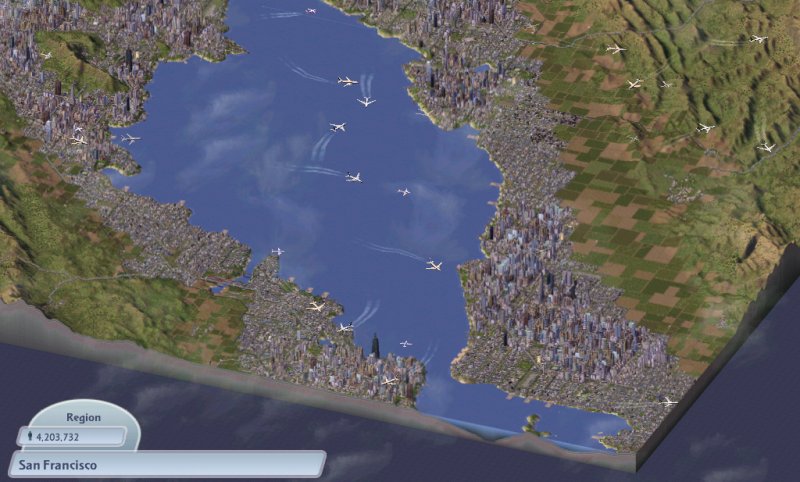 On the far side of the map, a single large secluded city district lies, stretched across a large area of land. Most of the eastern board is dominated by long narrow, impassable hills with little vegetation. I did not try to level the ground, instead I worked around the terrain, looking for passable spots for roads. The gnarly, furrowy formation breaks in two spots, allowing highways to come through. 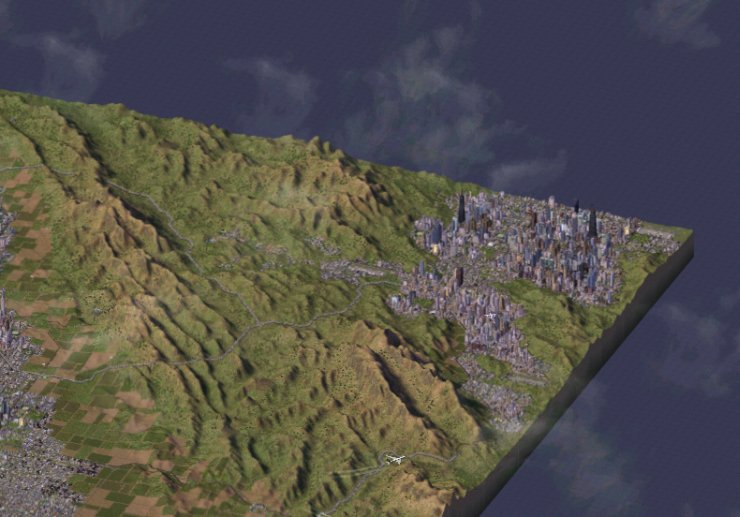 No not social, but transportation. SimCity is all about connecting your small areas so they function as neighborhoods of a huge metropolis. You can share water and power resources, export and import goods and provide work places for your people far and wide.

The city proper is dominated by an extensive grid of two-lane roads and subway. Some of the younger districts also have the hi-tech elevated monorail, connecting congested downtowns. Waterway traffic is also quite busy. Notice the thick ferry lane lines in the northern part, all around those islands and through the bay straits. 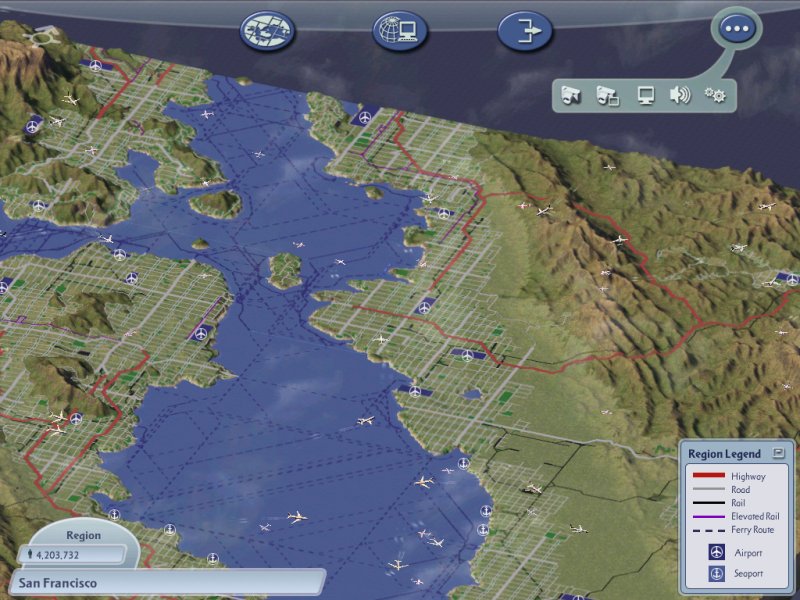 Highways are the main transportation arteries, and they stretch almost end to end across the entire map. There are four main multilane toll roads. Let's call them M1 through M4. M1 connects an unseen region to the north of San Francisco with the thickly populated north part of the eastern board, and it ends near the large airport in the island center, where M2 also connects. The second highway follows east, through the mountains and connects the secluded city parts. There's also a rail line following the same route. The southern part has no highways, except a short section, as it is mostly industry and agriculture, where there is less need for expensive roads. 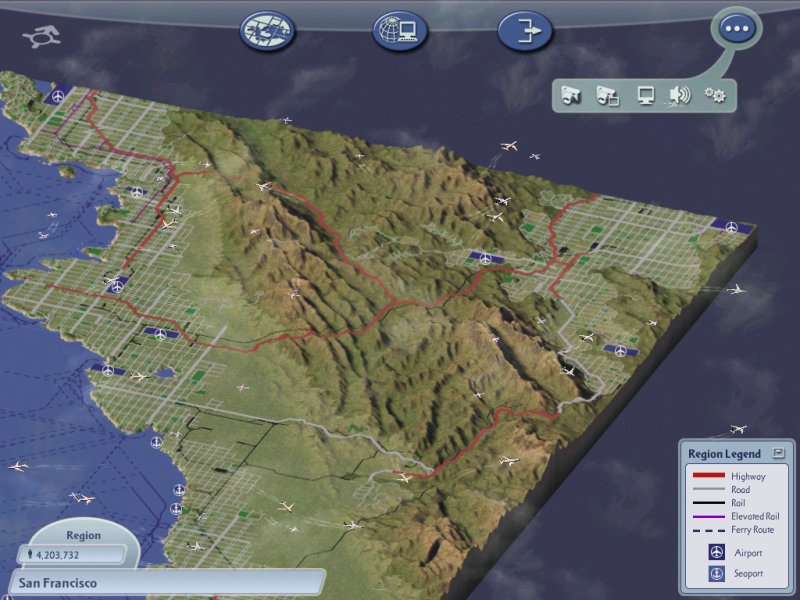 On the western island, the M3 highway branches into several smaller sections, and there's even a new planned route being built through the hills. It continues south and veers east and then into another neighboring region, serving mostly the industry. M4 connects with the remote district on the south lip of the island.

Airports are everywhere, mostly smaller, municipal ones, but the bigger city areas also have large, intercontinental ports. There are four large, some nine medium-sized regional and half a dozen smaller airports, plus a handful of firefighting strips. Ship traffic is predominant in the north. 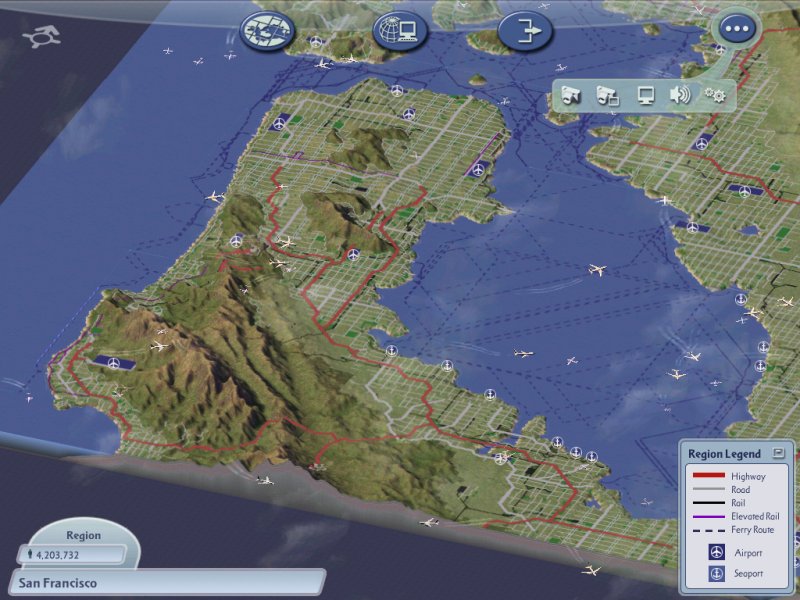 And now, a few screenshots of various districts, some of which have unique layouts. The city houses 4.2 million people, and it provides an impressive 3.3 million work places for industries, services and agriculture. As you can see, more than half the land is not settled and some 30% is dedicated to farming. I deliberately avoided plain, boring squares and opted for more lifelike, slightly chaotic urban planning. Commerce and residential areas are mostly mixed, industry and farming is pushed more toward the suburbs in large, continuous strips. City centers are well planned with straight roads, but the periphery loses some of the cohesion, with vague borders and natural limitations.

I gave all my city districts British names, so don't get alarmed by the likes of Brighton, Leeds, Milton Keynes, or Chelsford. That's how it's supposed to be. Anyhow, here's a typical modern city downtown, with a grid-like road layout and there's the M2 starting right there.

This is the far north-west. We see an unnamed highway wriggling through the city and going off into unknown. The highrise is prominent, rich buildings, lots of offices and rich residential housing, almost no industry, except near the airport area. 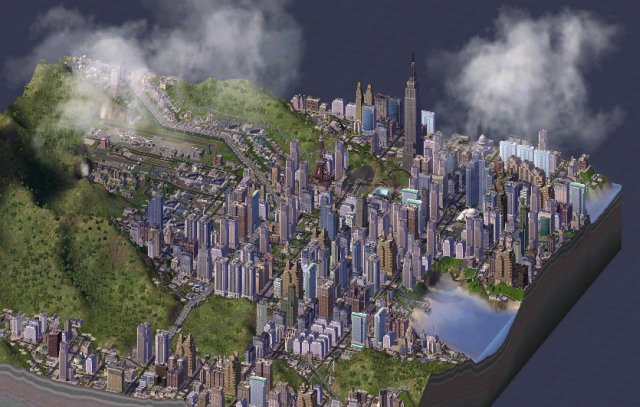 Enfield is a typical industry-only city. Almost its entire area is covered in hi-tech offices, labs and low-pollution manufacturing, with just a bit of agriculture. There's also a municipal airport adjacent to a large firestrip, critical in this kind of areas. Three bridges with highway, dual-lane road and rail cross the city. 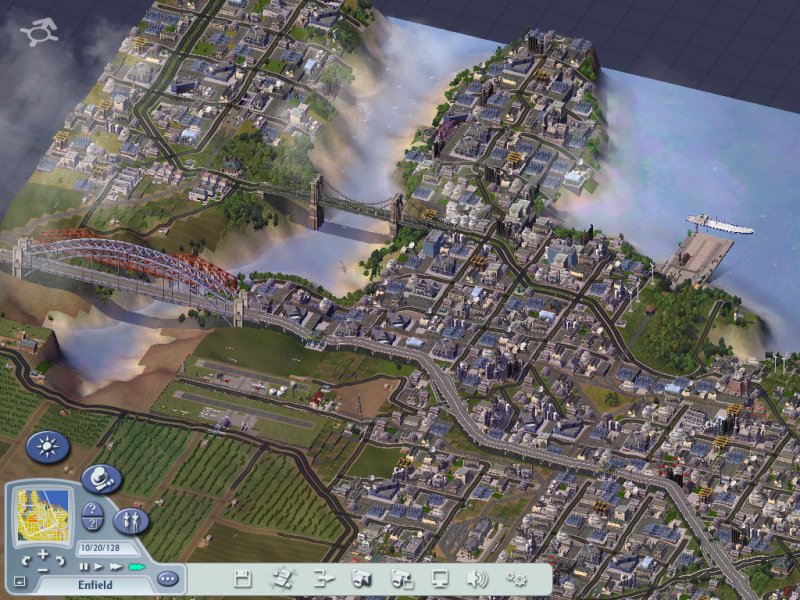 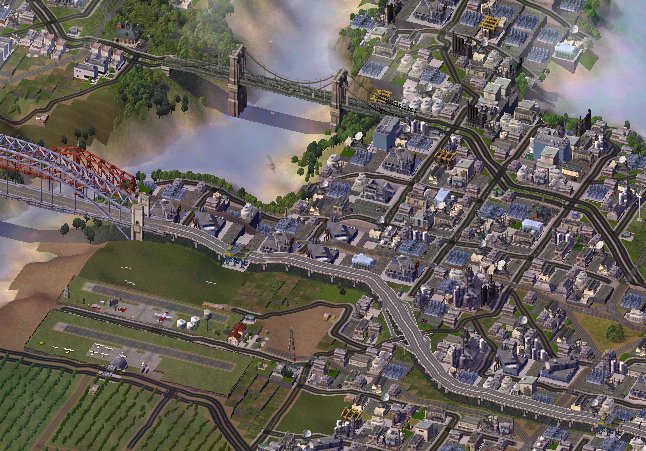 Part of the greater London area, the last suburb against the north-western hill ridge on the eastern board. There's a secluded farming community, besieged in farms of all sorts. Some of the roads are only dirt, as there's no need for more. 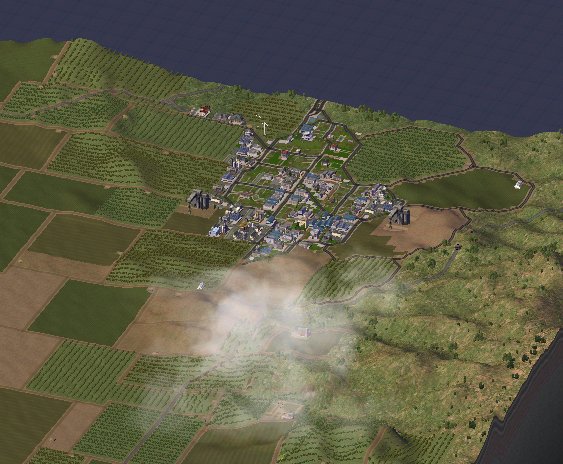 The far east has a military base and a few small villages servicing the troops, wink, wink.

The edge of the world, the south-west corner. There's a large airport, as the city is almost completely disconnected from the rest of the region as well as a short leg of what would be M6. It's a rich city, nevertheless, with a developed urban center and stock market. 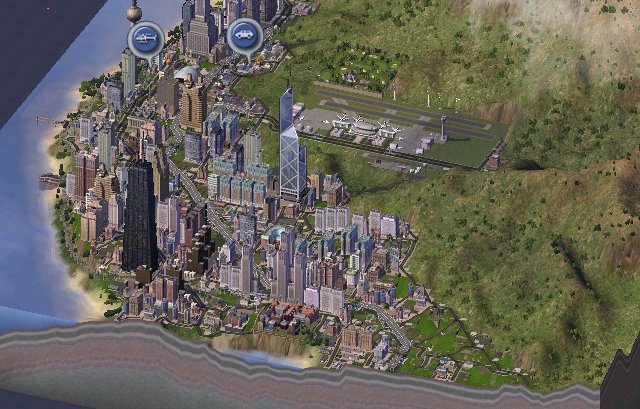 The famous sandy beaches. This is somewhat like Miami (Vice). 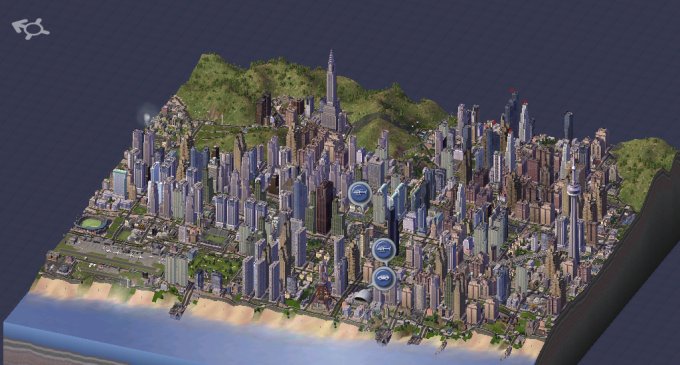 Sheffield is another large city, with some 200,000 people, its own airport and even a Space Shuttle launch pad, amidst a large hi-tech area. The grid-like planning is quite apparent, with central lanes breaking into smaller streets, with a bus stop and a subway station at every corner. Works well and there's virtually no congestion. 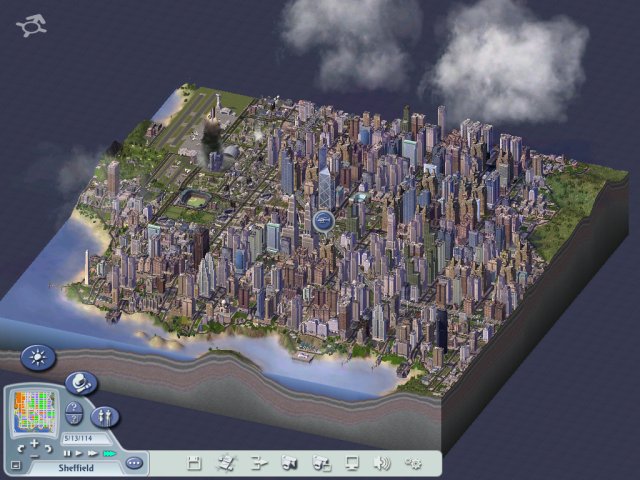 Just a teaser, fellas. And here the tour ends.

There we go. SimCity 4, three years of hard labor and love, 68 districts in the San Francisco region, 4.2 million citizens, 3.3 million workers, thousands of miles of road and rail, dozens of airports and docks, 100MB worth of data in the region game folder. The city building was executed in SimCity 4 modded with NAM, plus Radical Ordinance, Clean Air, Industry Multipliers, Functional Landmarks, and maybe some others. I had dust roads for farmland and a few more tweaks, no special buildings or trees or new industries.

I loved building this region. No other game gives you as much longevity for your urban projects, with so much complexity and so much inter-connectivity. Your entire region is one large, living, breathing entity. And after investing several hundred hours making it, it's as if you've created a real city. May this game live forever.

Now, onto my next city project!