I lied. Not really Saracen, more like Saracen-ish, with some fantasy elements borrowed from Warcraft. Like all my other masonry works, it only loosely follows the basic guidelines of historical architecture. But still, it's a nice castle. I used real images as textures for stonework and roofing to make them look more authentic. I also used the cracked mud for the dried moat around the castle. It does remind you of some of the maps in Warcraft, doesn't it?

The castle has quite a few round angles, a trait that seemed popular in medieval Middle East, which is why you may confuse my work for something from the Crusades' age. I did take a look or two on the Syrian Krak des Chevaliers castle for quick reference. So, here's the gallery.

We begin with a few bird's view images from above. The dominating colors are sandy browns, supposedly meant to give a feel of somewhere hot and dry.

Let's zoom in. The gate is meant to be imposing. It has a fat, round arch covering it, with murderholes on the underside. Three turrets are mounted on the barbican, overlooking the approach, with sharp knob-like extensions to break off any siege weapon attacks. Smooth and steep rock faces wedge the gateway, with narrow yet treacherous water-filled shoulders. The approach spans above a deep, dry moat, floored in cracked mud.

Deeper inside, the approach is covered by walls with crenelations for archers. It ends up in a steep ramp, rising toward the gatehouse and the massive double-doors.

The gatehouse is flanked by menacing-looking turrets with spiky protrusions meant to inspire dread with any newcomer. It has a broad, wide balcony for soldiers to pile up and shoot at any attackers.

Inside the castle, we encounter the usual daily stuff of a military bastion.

The walls double as storage rooms.

Near the gatehouse, there's a complex-looking watchtower, covering the north and west approach. It spans the inner and outer walkways, allowing troops to quickly move into high defensive positions on either side.

At the bottom of it, there's a cute ladder, leading up.

Stables look out toward a maze of arches and passages, bolted with grates and thick doors.

On the other side of the heavy, round keep dominating the castle, there's a barn, where the castle occupants keep their food supplies.

Not surprisingly, the bakery is just nearby. Fresh croissant, anyone? Maybe a pita?

The heart of the citadel is the fat, tall keep, with numerous extensions and mini towers. The balconies double as artillery and archery positions in the time of siege. The small trapdoors leads to cellars where weapons are stored and auxiliary passageways.

The top of the keep looks a bit fantasy-like. There's a chapel-like building and a funny monument, both of which do not quite fit into the historical scope. But I like them, so there they are.

The other important building is the auxiliary keep on the east side, with the star-like bulwark. In addition to being tricky to approach or sunder with siege machines, the purpose of the spiky look is to intimidate the enemies. The narrow slits are for archers to keep the attackers busy.

And for the end, here's the top view:

Here's the same model, only re-created using Kerkythea, after exporting the model using SketchUp Importer for Google SketchUp and rendered with photons and ray tracing and magic and whatnot. You will like this. My dream of making near-realistic models is coming true, finally. Nirvana. Spledidski.

This turned out to be a very difficult model for rendering. Because if the limited dimensions of its base, the lighting came all wrong, so I had to redo the model, changing the textures and increasing the size of the surrounding cracked mud field to infinity. Then, it came out proper like. Even so, I'm still not satisfied with either the mud or the gray earth slab supporting the castle's flanks, as the texture is repetitive and does not feel too realistic. But this is something for the future.

A short tour around the castle: 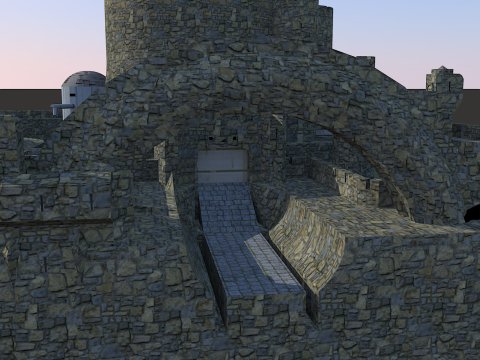 I really liked this one; the smithy looks nice.

Some lovely images with a calm water background:

A fancy reflection, and we're done!