I've chosen this extremely deliberate and provocative title to draw your attention to a philosophical question: if no one reads or respects software end-user license agreements, known as EULA, are they ipso facto valid?

All right, you've been baited and hooked, now read on. I want to talk to you about license agreements. We've all seen them, few of us have read them. If you're under the impression people spend precious minutes of their time chomping through legalese, then you are sorely mistaken, deluded, a member of the special fraternity called super-geeks. Normal people pay little to no attention to license agreements. Which brings us here. Let's debate. 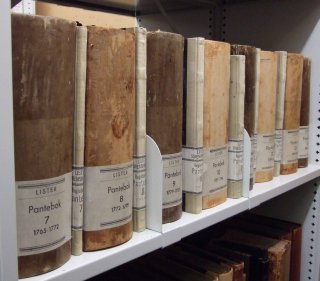 Disclaimer: I will be using screenshots of license agreements in this article for ambient decorative purposes. That does not mean they are either good or bad or anything. Don't misinterpret my screenshots as an endorsement or a condemnation of said vendors and their terms of use. Any link is purely coincidental.

License agreements, from the user perspective

Users just want to use their software. Nothing more, nothing less. When installing software, you don't have time to spend reading tons of boring, repetitive legal stuff. Even with best intentions, most people are simply not qualified to interpret the minutes worded in the license agreements.

In a way, EULAs could be traps. You are expected to find loopholes and problems, using your simplistic, time-limited, unprofessional judgment, in a 15-page document. If you don't, it's your fault. If you do, you're lucky, or maybe an expert who knows what he or she is doing. 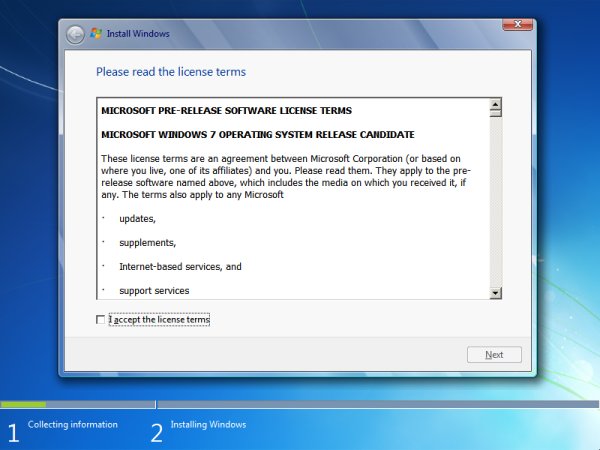 License agreements, from the legal perspective

You may claim that software vendors need to protect themselves from user malpractice. Indeed, this is true. As I've pointed out in my computer licensing article, since there's no official way to quality computer user, there are no official guidelines to separate use from abuse, except a small number of corner case that are actually supported by civil and criminal law.

Other than that, you can format your disk and lose everything and who is to blame? The vendor who creates the operating system? After all, they bundled the dangerous tools that let you make the mistake. But then, you ignored the warnings and popups informing you of the damage you're about to do. What about the administrator who setup your account with destructive privileges? What about the technical support who did not teach you how to use your machine properly? 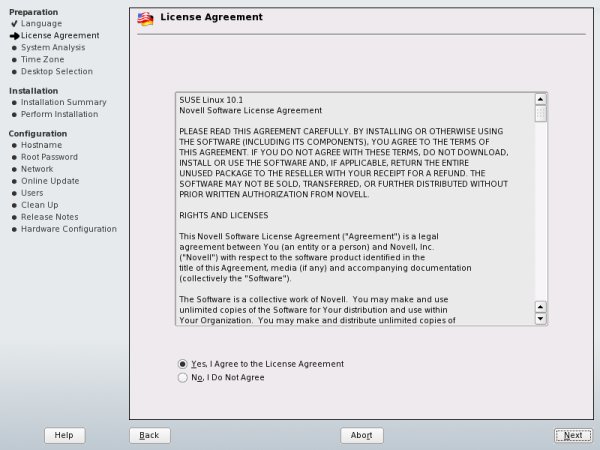 All of these questions cannot be answered as long as there's is no format framework for qualifying users. Like cars. Once you're approved for driving, you bear a healthy dose of legal responsibility and you pay for insurance, which ought to cover your mistakes. Again, there's no such thing in the software world.

In a way, software vendors must use their draconian agreements to protect themselves from stupidity. But then, they also use stupidity to cover every single mistake in the mistake phase space that may or may not exist. Thus, you end up with license agreements that forbid you to take screenshots of software, sneeze while printing or use Latin on Mondays. Stupid just got stupider. So what is the legal border where we draw the line between best practice and benevolent intentions versus malice and a surplus of chromosomes? Hmmm. 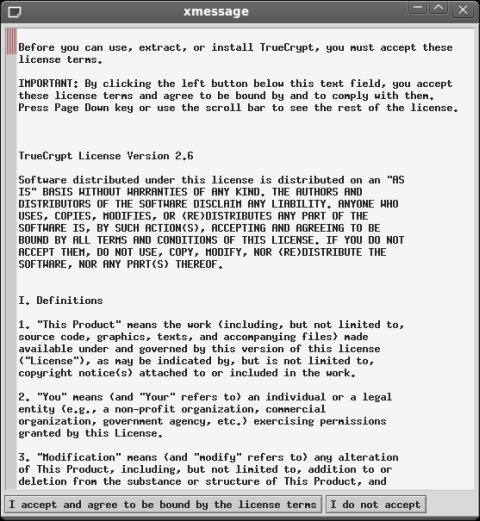 If you ask me, EULAs should extend only to software built-in functionality. They cannot extend to how users use their software. For instance, limiting the number of installations or forcing users to rely on a very specific subset of conditions to have their programs work. That's bollocks right there.

Another craparagraph (that's crap and paragraph combined) is the lease thingie. While you lease cars and eventually give them back to the company, software cannot be leased. It's sold and it's yours, forever. You are not asked to ship your product DVD back, simply because the companies don't want it back. In fact, they would incur terrible losses if they had to handle tons of plastic junk and dusty brochures that no one needs anymore. Therefore, they cannot insist on leasing, because they are not willing to be garbage collectors.

Yet another turdchapter that shows up so commonly in EULA relates to your privacy. Companies abuse license agreements to include privacy-violating terms, which have nothing to do with software at hand. It's a blackmail of a sort. You let us track you or you can't use our stuff. Well, how about you pay me for the tracking service? And let's not forget the agonizing verbosity. 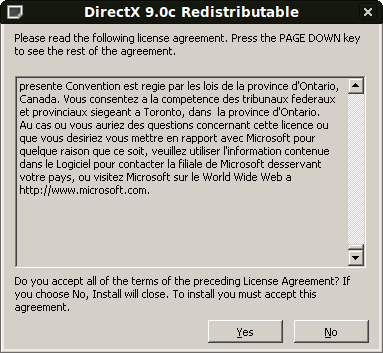 Lastly, bundling third-party software should be forbidden. If users do not explicitly ask for it, then there should be none of it. While this allows some vendors to offer their products for free, relying on the opt-in and opt-out toolbar and addon schemes to earn revenue, it allows creates an infinite space of abuse possibilities, as you can in theory chain any number of software products, using their respective license agreements as pointers.

How to interpret normal EULA from crap?

That's a good question. Let's assume you want to "think out of the box" and spend a few minutes reading the fine print, worded by the finest of lawmen of this world. Let's assume you do try to digest the page after page of unintelligible bullshit. What do you do?

There are some tools that can help you automate the task and make it simpler for you. One of these tools is EULAlyzer, a program designed to read and digest license agreements bundled with software. It's not perfect, but it can sniff out advertising, promotional messages, third-party stuff, and without notice activities that could potentially annoy or even harm you. We saw EULAlyzer in action in the now ancient and totally forgotten case of Softpedia delisting Comodo software. This program is for Windows only, but then, it's most acutely needed there, as Linux users have it much easier. 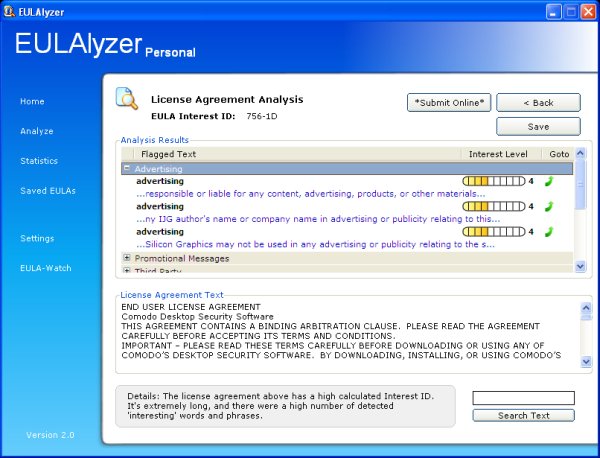 Indeed, another alternative is to choose GPL software, which covers a large portion of open-source and free projects, mainly for Linux, but also for other operating systems. While GPL does not guarantee nirvana, it does significantly reduce the chance for abuse and pain.

Now, choosing software based on ideology is not my style, but if you happen to have a great program that you want or need to use and it happens to be unencumbered by vampire agreements, you're lucky. However, using software for the sake of ideology is just as bad and restricting as the formal legalese on the other end of the spectrum.

On the bright side, pretty much every single Linux distribution and software is okay. The terms are fair, so you ought to be covered there. On the other hand, many Windows-only vendors take a little more zealous approach. As a rule of thumb, the bigger the company, the bigger its EULA.

P.S. Do you know any other tools other than EULAlyzer? If so, bring it on!

Respect the EULA, the other side

Now, if you are a user and you feel that you're about to commit good, just and useful software to your machine, then you ought to exercise enough moral responsibility to respect the terms of use. This means terminating your use after the trial period, using only the permitted number of copies and such. Moreover, as a tribute to a respectable mutual relationship between the two of you, you can then recommend the software vendor to your friends and colleagues. It's only fair.

In today's reality, license agreements are mostly vendor protection mechanisms. They give you little choice and even less help. Lots of stuff in these agreements would probably not hold water in the court. There's a sort of a status quo between users and companies, as in you don't mind that we abuse your products and we won't sue you back for the flaws in your software.

Most people don't read and don't care about EULAs. We could say it's their fault when things go wrong, but it's not that simple. If just about everyone ignores the terms listed in agreements, then they can hardly be called agreements, more sort of disagreement. At best, people adhere to EULD. But sometimes, you do find decent things out there. If you go for open-source and free software - not necessarily at the same time - you have a better of chance landing on the fairness turf. And that would be all, I guess.

The book shelf image is in public domain.