Dedoimedo
A Place to Learn a Lot About a Lot
ArmA 3 & S.O.G. Prairie Fire DLC - Welcome to the Jungle II

By and large, I don't like the concept of DLC. I find them cheap, but not in the financial sense. However, I'm not opposed to big (meaningful) expansions packs, which one can consider a game mid-life facelift, sort of. If you get a solid bundle of goodies that can infuse an existing title with fresh enthusiasm, then yeah, I can cope with that.

When I read about Creator DLCs for ArmA - third-party bundles made by non-Bohemia developers, I got curious. Sure, there are tons of awesome missions and mods and maps made by the community, and many of these are absolutely delightful. So how does a professional set fit into this scheme? Well, I decided to spend some money and get Prairie Fire and Global Mobilization. Today, we review the former. 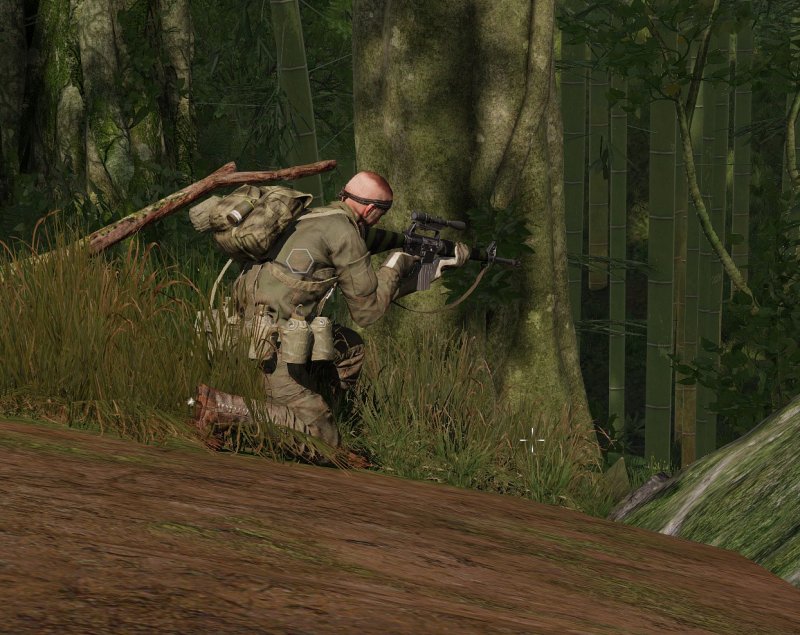 This DLC focuses around the southeast Asian theater of war, namely Vietnam, Laos and Cambodia. Unsurprisingly, the DLC map is called Cam Lao Nam, a 300 km2 terrain that brings 1960s vibe and materiel, thick foliage, historic battles, and tons of low-tech weapons. I like this concept, because, somewhat like the other expansions, it allows for an almost infinite growth in ArmA. First, there was the classic European Cold War theater (from Operation Flashpoint all the way to ArmA 2), then the Mediterranean slash Middle East in ArmA 3. A few years later, we got the Pacific theater in the Apex expansion. Global Mobilization is all about the glorious 80s, and the European region once again. Prairie Fire is the fortunate child of the bunch.

Buy, download, 25 GB of data, done. The DLC needs to be activated separately in the game launcher. When you do that, the game loads with a completely different skin. The in-game server browser menu and such are changed. A bit slower to respond, more clicks are needed to get to what you need, but then, the server connection tool will actually remember the IP address of remote servers, which is not the case in the standard game. When you unload the DLC things go back to normal. Almost. In the standard game, the loading progress bar animation has always been colored green. After Prairie Fire, it's brown-yellow. And this does not go back to the original hue, even if you unload the DLC. A tiny but annoying detail.

It says prairie, but 'tis jungle

Overall, the developers have invested quite a bit of effort in making Prairie Fire appealing. There's a brand new healing (administering first aid to wounded comrades) system, and tons of new sounds and weapons. You can fast-travel in helicopters to the landing zone. I am confused why the name, though. My knowledge of vegetation is that what you have in the southeast Asia definitely isn't prairie. But hey.

You can skip travel - not very realistic; you're supposed to suffer.

Some crude jokes, plus a new way of FAK-ing your teammates (see, I can do jokes, too, yay).

I went into multiplayer right away and started a number of missions with me mates. Things were fine overall, but a lot of the CO-OP scenarios require big teams to be playable. Going solo or with just one or two friends against an entire army isn't feasible, realistic or that much fun.

Somehow, with that hat and the 40mm grenade launcher, my character looks like Blain from Predator.

In some aspects, this is still the good ole ArmA. Serious and unforgiving. On the other hand, some of the extras feel a bit arcade. Ambient noises, the mood-setting details, the over-emphasis on radio chatter and rock music detract from the overall effect, and tend to create a less-ArmA feel.

This is the worst offender of the whole bunch. When you toss a nade - and Prairie Fire does bring a few nice new grenade types, including phosphorus and such - the explosion sounds are totally off. In the original game, the sound would be a short loud rap, as it ought to be. Here, you get the booming crash-bang noise, which might be appropriate for a controlled detonation at the bottom of a valley surrounded by mountains, definitely not inside the thick jungle foliage, with no reverberation or echo surfaces.

It's dark and wet and lonely out there. The effect is somewhat ruined by the overenthusiastic sound effects.

The sounds persist in any mission type you choose, so even if you go playing any random scenario on Altis, fire a missile, activate a satchel charge, or toss a nade, everything goes thundery. This forced me to deactivate the DLC when not playing the Cam Lao Nam missions, because the sounds really take away from the experience.

Another problem is the loudness of jungle engagements. I know the developers wanted to make combat more intense, so you can "hear" your foes just meters away. That can definitely be unnerving. But when those sounds are, once again, too loud, the essence of ArmA slips away, and you get the arcade feel again, which is not something you ever want to associate with this lovely simulator.

Oh yes. I mean, once you have the DLC, you can goof about in PT-76 tanks, fly ancient prop machines, and SKS your way into combat. Another cool thing, you can use your rifle as a strike weapon in close-quarter combat. The variety and fun are there, definitely. But the overall feel of the jungle isn't that different from Tanoa, and it's only the technology level that largely separates the two. Cam Lao Nam is a good, interesting map, but you do need a plenty of friends to truly immerse yourself in the grueling jungle survival missions.

Low-tech fun and whatnot.

A new type of grenade in use, right there. Trying to keep the enemy off my wounded comrade.

Top: F-4; bottom: F-4's dire enemy, the SA-2 missile. You can't launch it, just tow it, so I guess sometime, somewhere, there is a mission where you need to find and disable an SAM site or some such.

Prairie Fire is a pretty decent DLC. It's worth its price, and it does bring merriment, color and variety to the game. A unique, analog twist - hint, we might get a World War Two DLC soon - and there's plenty of new and cool things to go around. But there's also a light dusting of arcade that I found annoying, plus the sounds of explosions need serious tweaking. And you need friends, lots of friends, to enjoy the MP CO-OP scenarios. Forever alone.

If you're looking to "refresh" your ArmA experience, then Prairie Fire does the job. I was curious and ever so slightly skeptical about a third-party mod, but this one works quite well. There are no obvious glaring bugs, no performance glitches. Then again, if you recall my DayZ shenanigans, the ArmA world has always been quite extensible. All in all, this is a good addition to the ArmA world. Now, off you go play some.