Dedoimedo
A Place to Learn a Lot About a Lot
Want to get annoyed? Why don't you watch some News?

According to statistics I just made up, an average adult human spends about half an hour in front of the TV daily watching different news coverages. This means that an average adult human averages 3.5 hours of unnecessary annoyance hours every week. In a lifetime of 55 years as an adult, that becomes 10,000 hours or more than a year of self-inflicted pain.

We live in a pretty shitty world. Our lives, believe it or not, are filled with bad things. Not necessarily personally bad things. But all around us, bad things happen all the time. A day in life consists of quite a lot of negative emotional input that we are exposed in almost every situation. And when we come home from work, exhausted and irritated, we hope for a moment of respite from the dull, soul-eroding futility of everyday life.

Instead of taking off the shoes, going out and just lying in the grass for half an hour, meditating, listening to the wind and birds or children playing, most of us feel an inexplicable urge to prolong our suffering, cause our souls more of the pain and abuses it sponges every day. We sit down in front of our TV and tune in on a news channel. 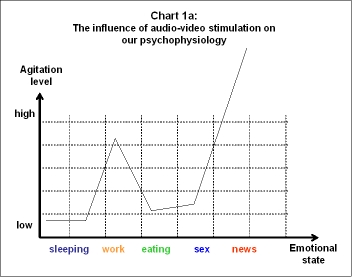 And what do we see? Misery. Poverty. War. Disease. Unemployment. All of the things we so much hate are flung back at us in all the brilliance of colors and sounds the modern media can spawn. We are given no choice. We are forced to participate in the orchestra of sado-masochism called the news.

First, the so-called news provide coverage of things that have already happened. Not really news. More like "events that have taken place but we would like you to be informed about." Selective news. You will see only what they want you to see. What isn't on the news has not actually happened. No one really knows about it. There's a huge war going on in Zaire. Millions of people have died in what can probably described as the World War 3 of Africa. There's human trafficking and slavery in Sudan. Do you hear about this in Western news? Not really. Paris Hilton has had more news coverage in the last year than the entire African continent.

Bad news only. We are never told about good things that happen in this world. If 1,000 trees are planted in the defoliated regions of Brazilian forests, you're not likely to hear about it. But if 1,000 people die in a train crash, you will certainly get a glimpse of the horrible accident. And sadly, for all practical purposes, it won't matter anyway. People have grown completely numb to the calamities of this world. We see so much death and destruction that it becomes normal. No wonder no one wants to donate any money to humanitarian organizations. After seeing 100 types of genocide on prime time just before the episode of your favorite sitcom, day after day, you will certainly not find anything wrong in the fact that millions are being killed every day, because, after all, it's an everyday thing.

But if we were exposed to these events very rarely, we would perceive them as strange and irregular events. They might even trigger some bit of emotion in us.

But it's impossible in the current reality. We are being morally beaten from dawn to dusk. And when we come home, we're served apathy, sadness and hysteria for dessert. Even if you had the most benevolent of causes burning passionately in your heart, it withers down after a while. You see this world is bad. You realize that trying to fight for anything good would be a lost cause. And so, out of self-preservation mechanism, you let the masochism reservoirs fill up and then you switch channel to something else.

We need good things on the news. Public awareness is important, I agree. And it's easy to stir it up, especially using the most popular broadcast media. But maybe, instead of pointing fingers at bad people and bad things, we could point things at good people and good things. Eventually, people will learn to distinguish. They will be able to tell who the villains are, without an anchorman's help. Why not report about people who donate money? Or those that turn in accurate tax reports? Why do we only hear about embezzlers?

It seems that the news people grow happy when there's something bad going on. This gives them an excuse to try to look melodramatic and woo for their Pulitzer prize. It's such a sad thought. Making money out of other people's misery.

We, the spectators, give them an excuse. We flock to the TV screens and stare like hypnotized, at hour after hour of boring, repetitive reports, which only instill the despair deeper into our souls. No wonder we are so irritated and so easily angered. We bear a dark poison of tension and anxiety in our sub-consciousness. Did you ever try watching the news with your eyes closed?

Listen to the music. Drums. A dramatic beat. A gladiator entering the arena. No it's just the anchorman / anchorwoman. Listen to their voices. Somber, loud, accentuated. Listen to the reports ... "A major terrorist attack has been thwarted today ..." We breathe in relief. "... but it could have ended with hundreds of killed and wounded ..." Such a gruesome speculation. What if ... No one can know for sure what could have happened. It is possible that there could have been casualties. But it is also possible that no one would have been killed.

Serious events will get prolonged coverages that can continue for hours on end. It's almost a sort of torture. For those not directly involved, it's a brainwash that increases the agitation. For those who might have been involved or for their relatives, the thriller-like reports are a true torture.

Let's assess a hypothetical situation. I hope this never happens to anyone. Imagine someone you know was injured in a car accident. Imagine this event is broadcast on TV. You will see tens (dozens) of police cars, ambulances and fire trucks swarming the scene. You will hear news helicopters. You will see reporters with wobbly cameras running around, trying to make it look like a combat zone. And then you will hear a report: "... a big accident. There might be tens of wounded and killed."

What a horrible thing to say. How do you think a person whose friend or relative might be involved feels. Telling them that won't change the outcome. But telling them will increase their anxiety and worry. Speculative reports, just for the sake of creating a dramatic atmosphere, is horrible. It will not bring back dead people. And it won't make anyone dead. But it will strain the emotional strings of thousands of worries spectators at home, forcing them to remain in front of their TVs and watch, waiting for the next report. In a way, we become the emotional hostages of well prepared propaganda. News should be about facts. But most of the time, they are about opinions.

I respect the fact that media people also have to make money. I agree. But couldn't it be earned in happier circumstances? Why not increase the ads time? Yes, advertisements are extremely annoying, but at least they are harmless. Why not report a bit of good, inspiring things? I'm not saying turn the TV into a pink heaven. But 50/50 would be fair. Give us some hope. Give us some light. Give us some respite from the wretchedness of life's routine.

Weather forecast is probably the only chapter of a news session that actually tells us something news. Looks ahead into the future. Everything else has already happened. If you're in front of a TV, seeing it for the first time, most likely it has not and will not affect you. News should also be concerned a bit about future. Remove a piece of uncertainty from our lives. We love to know where we stand. If news could promise us we were going to be OK tomorrow, many more people would be smiling.

News could have become today's religion. But they have failed. Go to your priests. They will do what has made the religion so powerful in the world today. They will give you answers. They will give you hope. They will try to soothe your worries and sorrows with promises of brighter future. Most religions promise after-life and reward for the pious. You actually have a reason to try to be better in life and strive to improve yourself, your family and things and events surrounding you. And I'm telling you this as a total atheist. Imagine the perspective of a religious person.

The news could have become our priests. But they did not. They do not give answers and certainly no hope. Next time you tune on a news channel, think about what I wrote. Maybe your life will become a tiny bit less painful.