Dedoimedo
A Place to Learn a Lot About a Lot
DD 71, battleship with a destroyer's insignia

You should also explore the superb new gallery!

I do not know if US Navy has a vessel marked DD 71; if it does, then it's a coincidence. Anyhow, one day, I decided to make my own naval warship. I created a vessel that extends 750 ft (~ 220 m) tip to toe (bow to stern) by SketchUp measures, with three massive big-caliber gun turrets similar to the legendary USS Iowa class battleships, but also a collection of missiles and torpedoes more common to smaller ships, like destroyers. Immediately, I was presented with a problem: What should I write on the hull? What insignia? In the end, I decided to go with DD (destroyer) rather than BB (battleship) because it looked better if less realistic. But if we are to limit ourselves to reality, what then is art for?

And so my monstrosity became the biggest and meanest destroyer the world has ever seen. If there were a port crazy enough to build one, it would probably displace around 50,000 tons, ten times more than a typical real destroyer. Well, here's the gallery I dedicated to my canoe; each picture is accompanied with a few words of explanations. P.S. Don't take this too seriously.

DD 71 is a big and menacing ship. It has everything: torpedo launchers in the bow, a Vertical Launcher System (VLS) for surface-to-air missiles (SAM), three massive twin-barrel 16-in (406mm) guns, two mid-front one astern, a collection of self-defense cannon turrets in the form of Vulcan Phalanx Close-In Weapons Systems (CIWS), Harpoon anti-shipping missiles, and even a helicopter deck.

The two triple torpedo launchers are armed with small yet effective Mk.50 torpedoes against nuisance submarines.

The sky is defended by Standard long-range anti-aircraft missiles placed in vertical tubes for best interception angles at all times. P.S. I know the real tubes do not have hexagonal hatches; but mine are much more cool, i.e. l33t.

DD 71 looks imposing from a casual swimmer's viewpoint. Notice the port (left-side) torpedo launcher and the overhanging gun turrets. The background is dominated by a massive command bridge and antennae array. 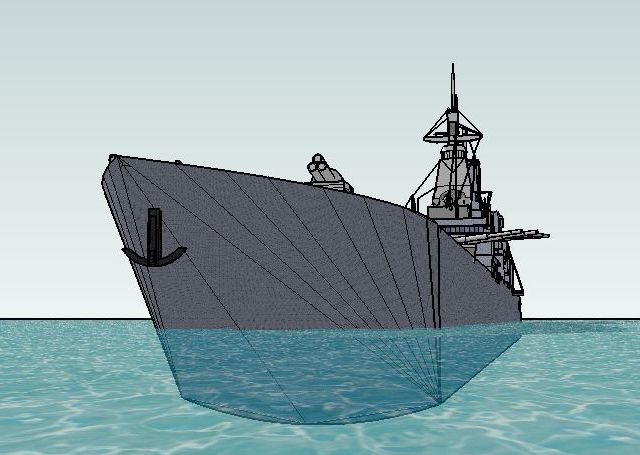 My gun turrets look much more chic than the real ones. While hurling forth at 30 knots, the barrels are moved into the broadside position, aiming at an enemy far beyond the horizon. 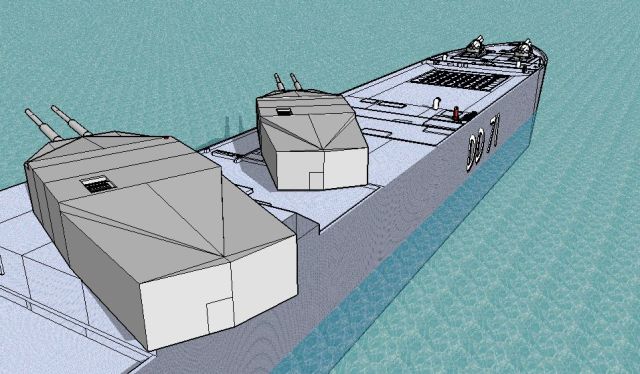 The command bridge is adorned with lots and lots of electronic equipment. All of those antennae and satellite dishes are used for one purpose only - a totally uninterrupted broadcast of the 2006 World Cup finale in football between France and Italy. 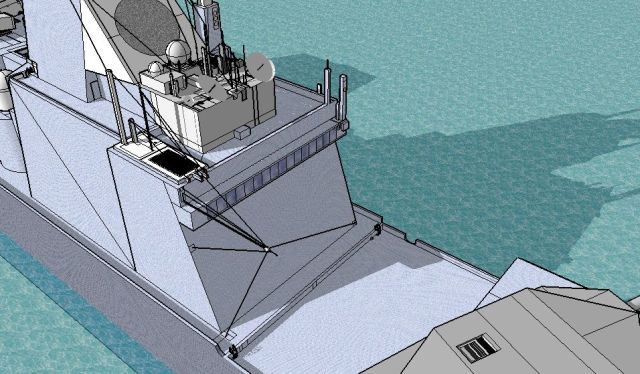 If an enemy tries to get smarmy, DD 71 packs a lot of nasty surprises behind its forecastle. It has two quad Harpoon anti-shipping missile containers, two R2D2-like Vulcan Phalanx turrets and even Tomahawk launchers. Steven Seagal would have loved to be on this ship. 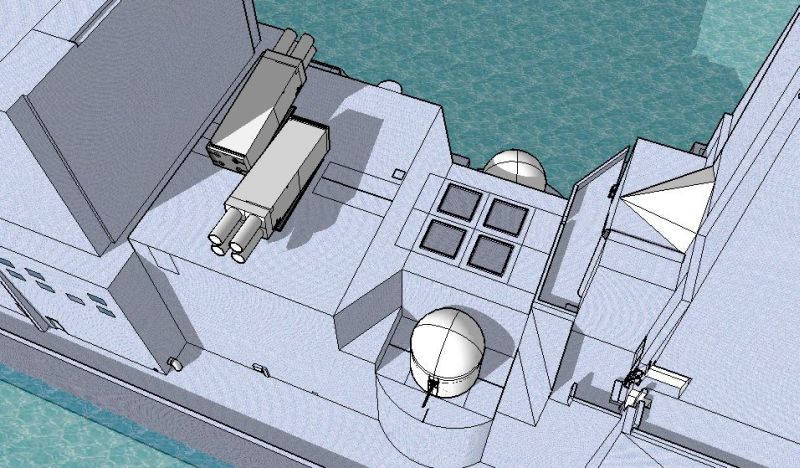 DD 71 is a environment-friendly ship, too. Those two chimneys emit clean smoke, as clearly evident by the spotless, soot-free paint. Behind them, a new-generation 5-in (127mm) dual-purpose gun is located. Looking definitely more handsome than the classic Mk.42/45, the sci-fi model can shoot down ships and well as hit naval and ground targets up to 40 km away. 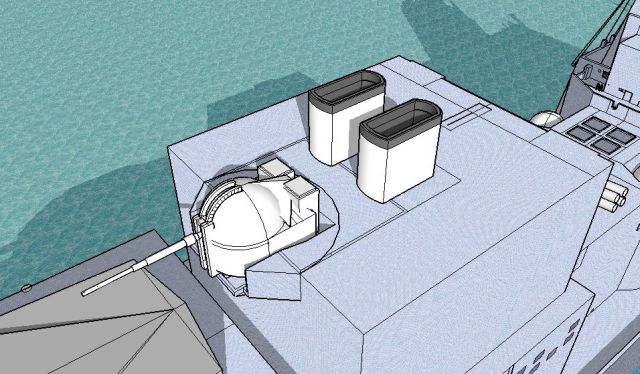 If the ship's captain fancies a bit of fun, there's nothing better than a helicopter to take him to some secluded beach on a deserted island, for a bit of suntan or sunset surfing. Notice the healthy plenitude of fire extinguishers in the helicopter hangar. The landing pad is clearly marked with a big H. While most people will think H stands for Helicopter or Helipad, it actually stands for Here - either the friendly pilots to land or enemy pilots to drop their bombs.

The helicopter and the fire extinguishers are not my images. I have downloaded them from the Google 3D warehouse and merged them into my project. These two models should be credited to MOFIESTFO and Google. 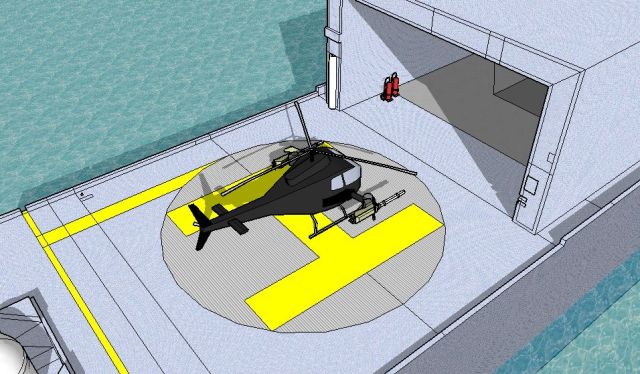 In the stern, behind the helipad, lurks another Vulcan Phalanx mount.

And thus, armed to teeth with beer for the Mondial, a surfboard for the captain and lots and lots of guns in the highly unlikely event of a war, DD 71 sails into the sunset, casting a nostalgic shadow across the waves. 3D rendering is a marvel, ain't it? 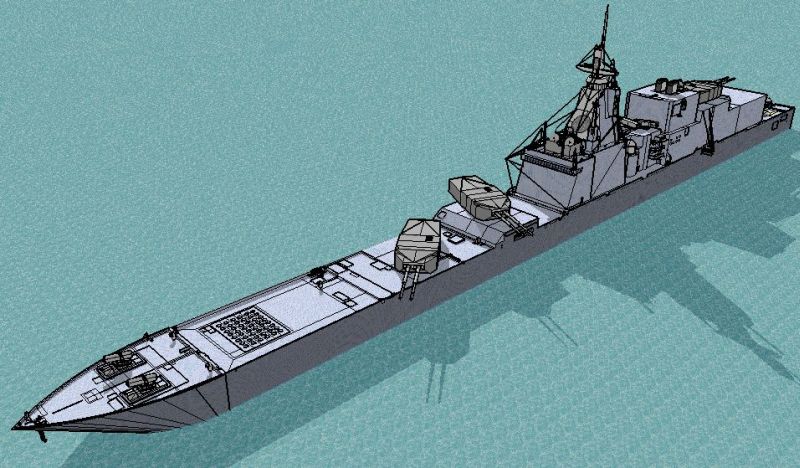 Just before darkness covers the ocean, the Task Force on-patrol Seahawk departs with the last photo from high above on the left side of the ship. 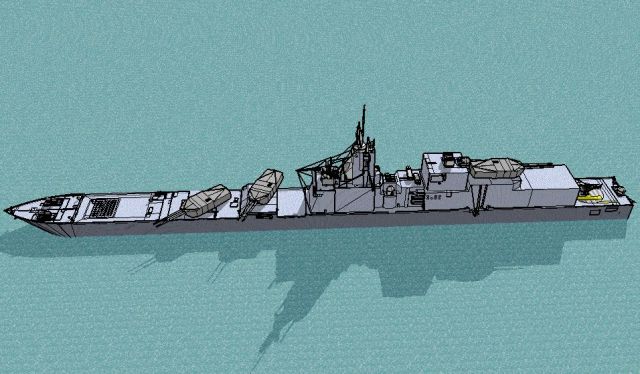 DD 71 took me about 25 hours to finish. While it may look simple, the project has about 10,000 lines or curves. It was also my first 3D project ever. Prior to downloading Google SketchUp and using it to create DD 71, I have never used software to make art. I hope you enjoyed it.

Here's the same model, only re-created using Kerkythea, after exporting the model using SketchUp Importer for Google SketchUp and rendered with photons and ray tracing and magic and whatnot. You will like this. My dream of making near-realistic models is coming true, finally. Nirvana. Spledidski. 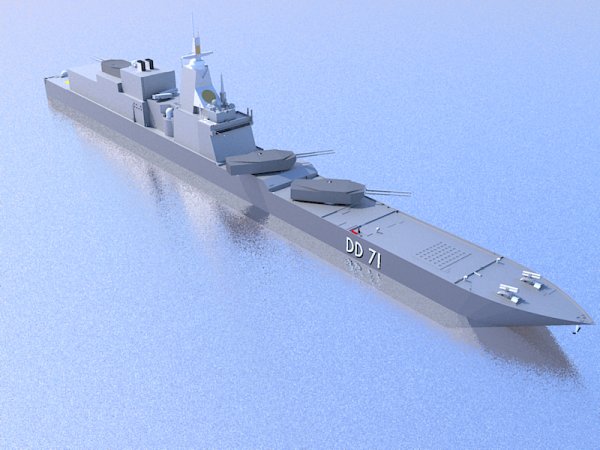 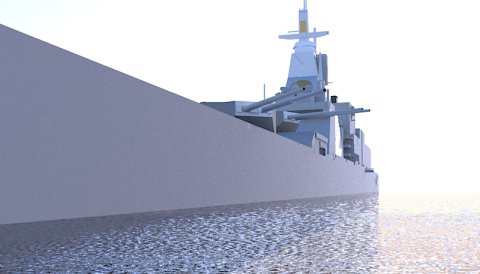 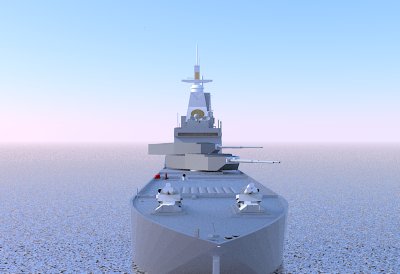 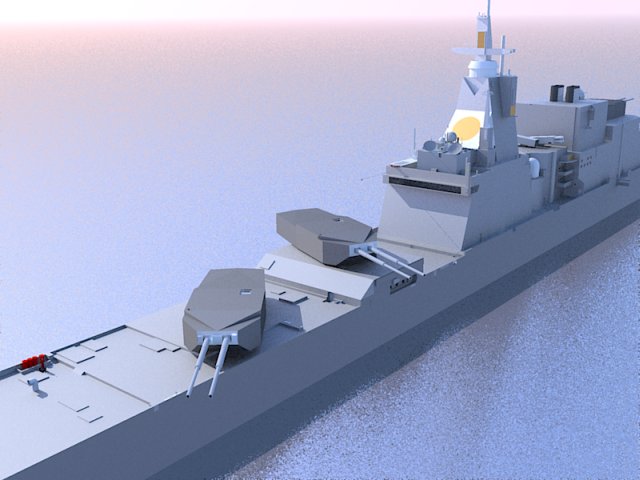 And yes, this is the very first model I made I've ever made in 3D. Kerkythea infuses it with a new life. It's absolutely amazing. Just scroll above and compare, to see what breathtaking difference a proper rendering can make. Now, a zoom-in on the tail weapons: 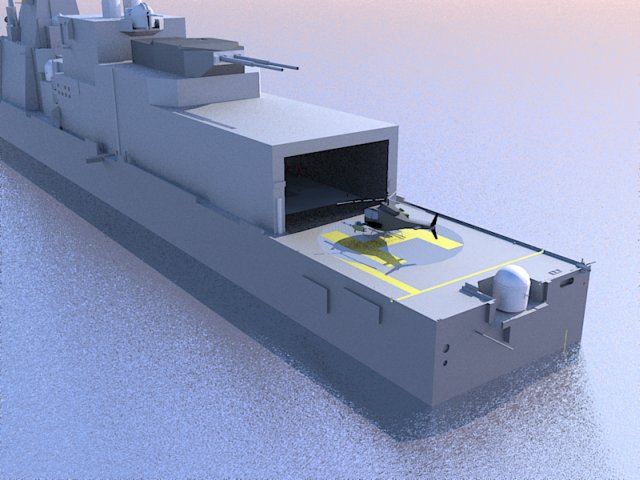 Notice the lovely metal sheen of the R2D2 gun unit. The helicopter unit is not that great, but then, it's an external model, and I haven't invested too much time polishing and tweaking it. Still, I made it red, sort of a rescue unit, made the glass panels transparent and pimped the helideck. 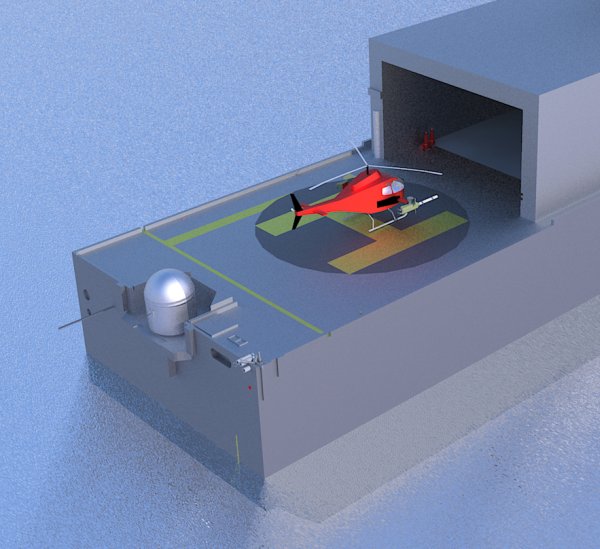 And the rear-facing cannon. Low-resolution, but then, if I give you everything now, you won't really need a sequel, now will you. As my CPU churns art, you'll get to see even more refined work. Meanwhile, enjoy this humble work of self-appreciated beauty.