You all know that I don't like the Xfce desktop. For some reason, nearly every single implementation thereof lacks something so important, so basic. Recently, it's been hailed as the replacement for Gnome 2, the new hope for Linux users disillusioned by the cartoon fever of new touch-like interfaces so wrongly mated to the traditional desktop. But I'm skeptical.

Then, there's Dreamlinux. The last time I tried it, Dedoimedo was still having just a few hundred visits a day, I believed splitting articles into many parts to garner more clicks was a good thing to do, IPv6 was going to run out soon, and it was my first really proper review that I can recall. And yes, Dreamlinux showed some real promise. Fast-forward to now, it hasn't quite made it big, as the development has been rather slow, but I still remember the good feeling of testing and using it. Can Dreamlinux make me not hate Xfce? 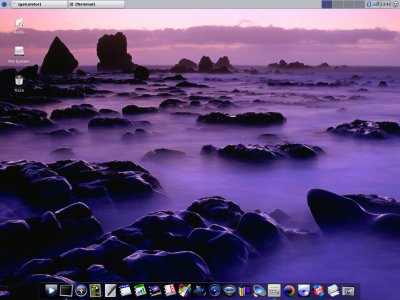 Live session - A lesson in grace

A-getting' hold of Dreamlinux was not a simple deal. Its download site went down shortly after the release due to massive traffic, so I had to wait a few days before mirrors started burgeoning across the web. Eventually, I had the ISO burned to CD and we were on our way.

Dreamlinux boots into a pleasant desktop adorned with a big, transparent bottom dock, akin to Mac OSX, a serene, somewhat neutral wallpaper, and a clean top panel. At first glance, you won't really know what desktop interface you're running, which is a testament to the smooth and stylish integration. 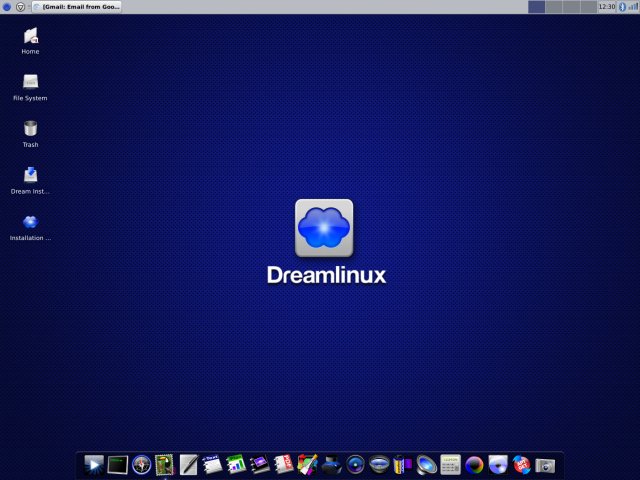 The bottom dock does not have a icon hover/focus effect, not does it display tooltips on what each icon represents. This is a small flaw, but a flaw nonetheless, as less skilled users will have to launch programs to discover what they are. For example, the third and the fourth icon on the left will both launch Chromium, only the latter will open Gmail rather than the default homepage. Sort of an application, if you will. Moreover, the depicted symbols on the would-be Gmail icon might be confusing, as I'm not sure what the big-beaked birdie has to do with Google.

However, you can easily pin new icons, similar to Windows 7. Moreover, in the true Mac fashion, active applications are marked by a tiny white dot underneath the icon. Overall, it works quite well.

Moreover, file type icons are also quite lovely. The Dreamer packs is unique, colorful and pleasant. The aesthetics really show, and this probably has to do more with who the developers are rather than anything Xfce specific.

The system menu is simple but not boring. While having a good and functional menu is a tricky business in the Linux world, Dreamlinux manages to achieve a reasonable balance between highly decorative and interactive solutions seen on Gnome and KDE and the rather boring grocery lists often seen in so-called lightweight desktops. The menu can be navigated with ease, if offers all the important bits and pieces without too many sub-menus, and notorious Xfce settings redundancy is elegantly avoided. 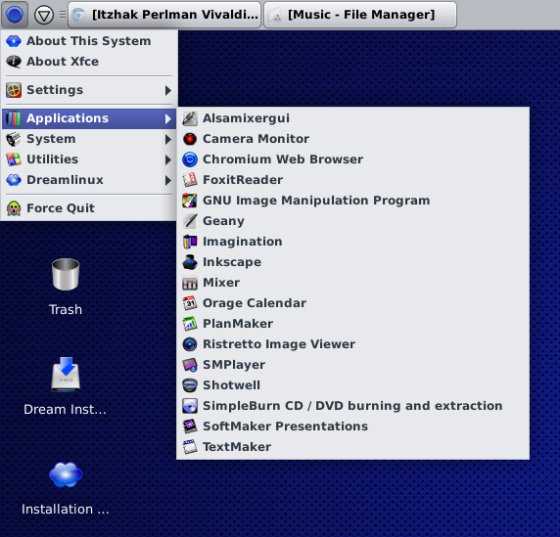 Other than that, the usual stuff worked - Wireless, Bluetooth - and Samba, which is not always a given for Xfce desktops. I must say I am pleased. So far so good.

Everything works out of the box. Jolly. You even get a free MP3 song in Portuguese, which should let you check and test your audio codecs and settings. Few distributions offer as much convenience.

Last time, I found the installer to be rather clunky. It still remains the Achilles' Heel of Dreamlinux, but it's now warmly padded with some sturdy woolen stockings. In other words, for those of you prosaically challenged, it has improved quite a bit. But it is still somewhat weird.

The installer begins rather alarmingly, asking you whether you want to use the entire disk. This tiny prompt feels utilitarian and may cause less skilled users to brown their pants. If you click not, the prompt will expand and ask you whether to repartition. 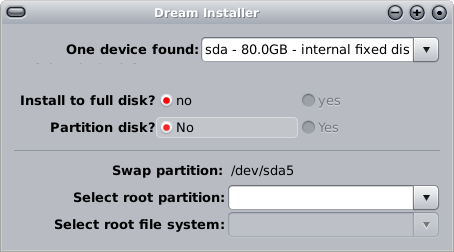 If you say no, you will then have the option to choose your root and format it, after which the prompt will expand once more and ask you about a separate home partition. All in all, it makes sense. But the somewhat unexpected unveiling of the curtain could deter users, as they really do not know what will happen next. 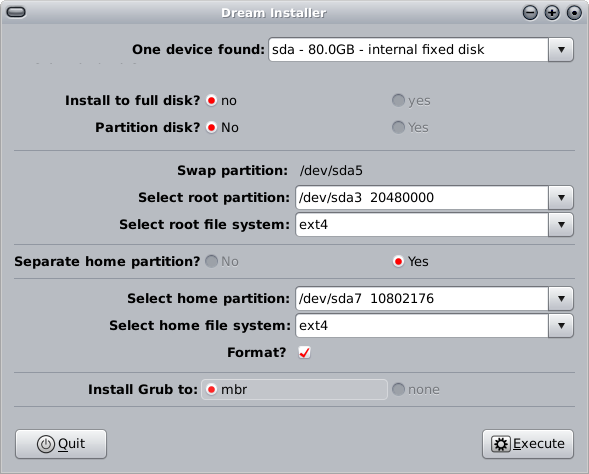 Finally, you can choose where to install the bootloader, if at all. Once this step is complete, the installation begins, no questions asked.

On first boot, I noticed that Dreamlinux did not chainload the resident Windows 8, so I was left with a single-boot system rather than having a proper multi-boot configuration. This is not a nice thing. I really see no reason why other operating systems should be left out, forever alone.

Next, you will have the option to configure your user and root. Meanwhile, Dreamlinux will be usable under a generic dreamer account. Your new account will be available on next boot. 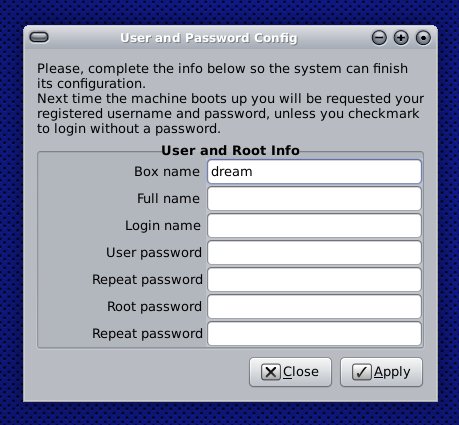 Indeed, this step went smoothly. Better yet, all my settings and documents saved in the live sessions were available in the installed system, including the Wireless configuration, application settings, screenshots, music, everything. Again, very few distros bother doing this, but I find this highly commendable. 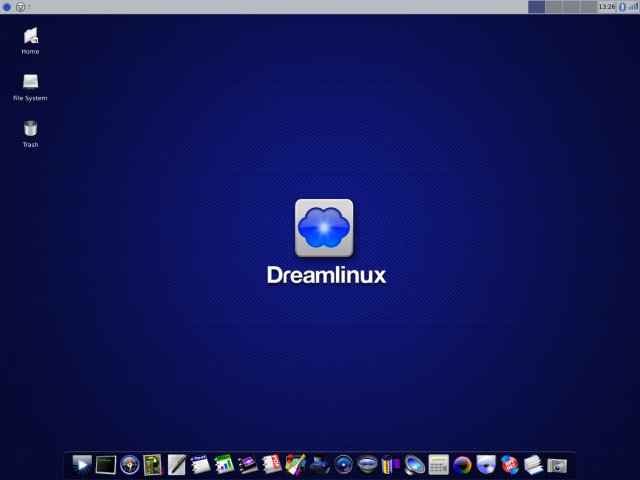 Dreamlinux comes with an interesting arsenal. Compared to the last version, the multimedia section has been considerably slimmed down. Gone are the tons of great programs for audio and video manipulation, as they probably appeal to a niche segment of users. Instead, more variety is added. 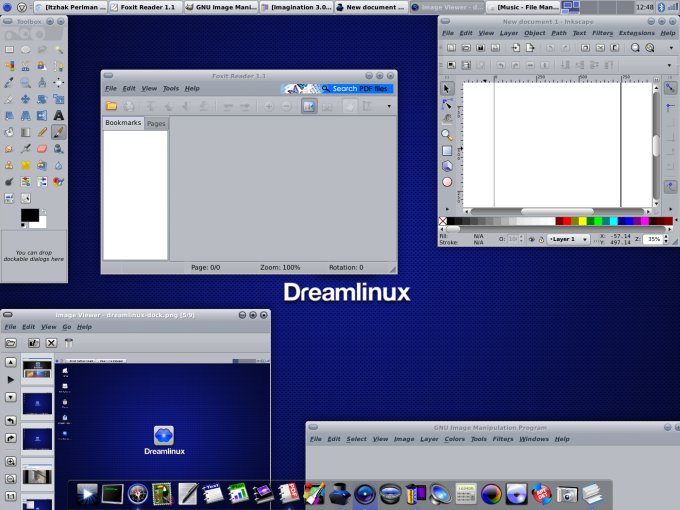 However, some choices remain dubious. An odd choice is Foxit Reader 1.1, the one and only Linux version of the program ever developed ages ago and quite likely abandoned. Then, I really don't understand why SoftMaker text and presentation software was chosen as the office applications when equally lightweight Abiword and Gnumeric could have been used. Furthermore, the two programs do not integrate well with the desktop, resulting in multiple bad-gradient ribbons in the user interface dramatically spoiling the visual fun. Finally, both applications are dated 2008, which makes their inclusion even weirder. 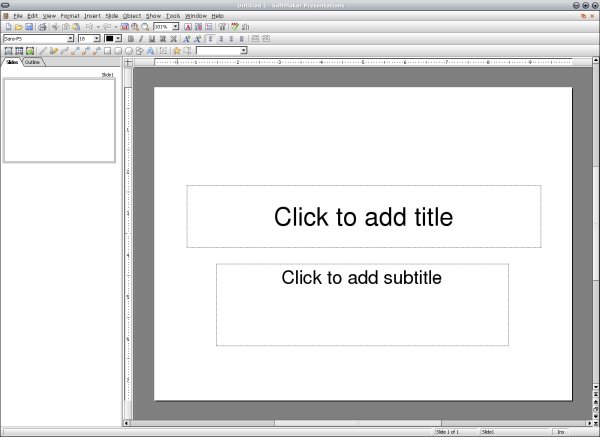 Dreamlinux uses Synaptic, so all is well there. Moreover, in the system menu, you have the distro upgrade shortcut, which will pull all the available upgrades for you and bring your system up to date. I tried doing this, and it went quite smoothly, although the download speed was not ideal, due to the lack of local repository mirrors. Then again, this can happen with small distros.

Dreamlinux is fairly lightweight. On average, the system drank about 210cc of RAM on idle, which is less than most contemporary desktops. Suspend & resume worked fine. 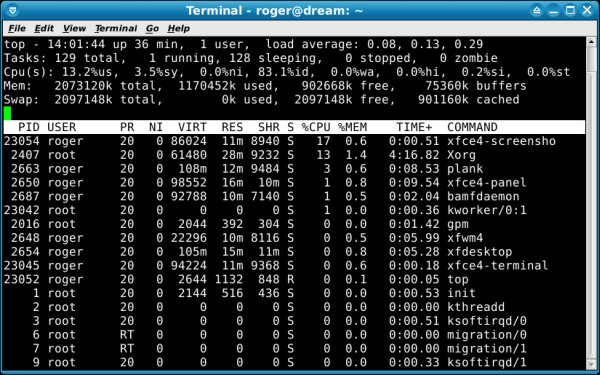 There were not that many. The system was rock-solid and it did not spew any errors. However, a few small glitches did come up. I already mentioned the lack of tooltips for the dock icons, but that's a minor thing. Another miscellaneous problem is the fact Chromium complained once about not being the default browser, when it clearly was, the one and only installed on the system.

But the biggest issue was printing - how the hell do I do it? Where? Why? I could not find any reference, any link, any shortcut, or any explanation that might shed some light on this rather basic need. I truly hope this is just an innocent omission on behalf of the development crew, but it could a big oops.

Before we depart, one last screenshot after some light tweaking: 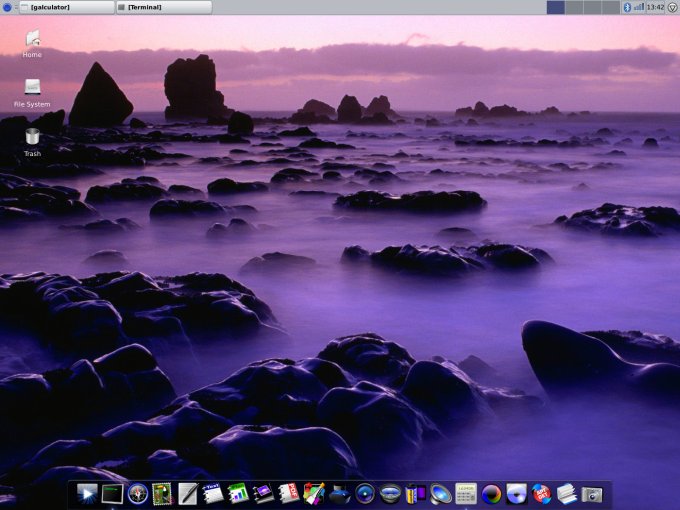 The answer is yes. Dreamlinux can make me stop hating Xfce. I dare say it is the best Xfce desktop around by far. It makes the dull and boring exciting and fun. Not an easy task, but it is done with extreme elegance. I believe the Dream dev team has some real talent in aesthetics, and they understand the concepts of composition and color. It shows.

It is not without fault, though. There are some bugs here and there. Printing is the biggest problem at the moment. And I would drop some 200-300MB of programs and get a new set, one more commonly seen and used. This would make Dreamlinux the first Xfce desktop that I would mull consider using for one of my machines. And I've not made a mistake there, as my deliberation process is usually so long and complex that it needs both mulling and pondering. And considering. All those.

One more thing that nags me is the capacity. Can Dreamlinux cater to a large crowd of users, should it prove popular? If the distro's site went down after a few thousand downloads, then how can the development team hope to manage with a huge influx of new, enthused fans? Is there a future for this distribution? Who can guarantee that it will still be around a decade away? No one. But I sure hope it will remain.

Philosophical doubts aside, Dreamlinux 5 is a blast. It gets 9/10, and for an Xfce desktop, it's little pissing gold. It is a remarkable work of beauty and polish and some good manners, too. If you've ever wondered what the life is on the dark side of the desktop, then you might want to check Dreamlinux first and foremost. Dedoimedo out.