All right, this has been one of those unfinished businesses that kept me awake day and night for months. Well, not really, but this is something that I have sought to resolve for a long time, and I finally have. The topic at hand: slow Windows 7 updates.

The symptoms you may have noticed: very high CPU utilization while the Windows is checking for updates, and a very long time for the check to complete, sometimes ranging in the tens of hours for unlucky users. This is obviously a waste of time. We tried to fix this before, and I gave you a less than promising article on the topic. We also discussed some alternative, unofficial tools to help with this rather annoying but persistent problem, in the guise of Autopatcher and WSUS Offline. Now, we will resolve this once and for all, using official Microsoft patches. Let us.

Microsoft occasionally releases recommended updates that fall outside the realm of security patching. Depending on how your Windows box is set up, you may not see these updates. Moreover, after the GWX fiasco, where a non-security patch was pushed onto unsuspecting users, lots of tech-savvy users have opted to disable recommended updates. This means they are not getting non-security improvements, if we can call them that, in their patching cycle.

However, two of the updates on this non-critical list are actually designed to help reduce memory and CPU consumption of the Windows Update client and speed up the check times. These two updates are KB3102810, which we did discuss in the first article, and where it delivered mixed results, the second being KB3161608, which supersedes the one above, but it is itself superseded by the July monthly rollup package KB3172605.

I proceeded to test this on FOUR hosts, including two desktops with a pretty similar configuration, and two laptops, including HP and Dell brands. If the WU service is disabled when you install the patches, you will not need to reboot, otherwise you will be forced to do so. 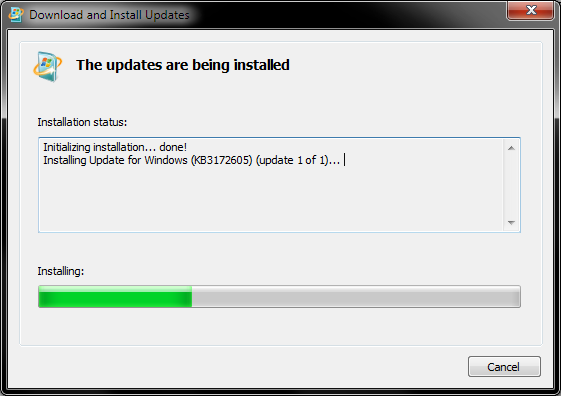 On all four systems, we get consistent results. The check times are down to just about five minutes, without any additional monthly patching done. Even with a solid backlog of patches, the check and discovery are rather quick. While it is impossible to know for sure, for the first time, I have completely identical results for all affected systems, and I am quite confident the fix is permanent. I believe the combination of these two patches will provide the right resolution for Windows 7 users. This includes hosts with anywhere between one and six months of outstanding updates.

I believe we have reached the end of the slow update saga, at least for the foreseeable future. Microsoft updates, especially the non-security ones, do not always hit the mark, as evident from my previous testing, but I think the last rollup does offer the necessary workaround for the high CPU utilization and long check times.

As always, I would recommend you test on a non-essential system first. Do not install other system updates in order not to mask the effect. Please install both patches, as the older item does not seem to yield 100% consistent results. This should put some of that curly hair back on the proverbial chest of your Windows 7 machine, and allow you to enjoy smoother, faster updates for many years to come. And no, there is no Microsoft conspiracy to make older versions suck so you would be forced to upgrade. This is just an unfortunate effect of bad coding and complex systems, and now it has been properly resolved. There you go. Two patches, and maybe only one innocent reboot. That's all. Proceed with love and care.