Dedoimedo
A Place to Learn a Lot About a Lot
Cossacks 3 - A new-old, under-the-radar gem

A few week ago I realized something rather extraordinary. As a great fan and proponent of Real Time Strategy (RTS) games, for some odd reason, I seem to have completely missed Cossacks. I don't know why, but in between Age of Empires, Total War and SimCity 4, two decades went by. Rhyme. And in that time, I never played Cossacks, a game focused on musket-and-dragon-heavy 17th and 18th century European wars.

Then, out of the blue, one misty evening in the realms of Dedoimedo, I saw Age of Empires II: Definite Edition in the Steam Store. And I thought, why not. Once I purchased it, played it some, and enjoyed it a fair deal, I noticed a handful of fresh recommendations pop up in me Steam Store page thingie, including Cossacks 3, an HD-remastered remake of the 2001 namesake title. The game cost only USD7.99, so I thought, one more time, why not. Purchase, play, review. Here we are. 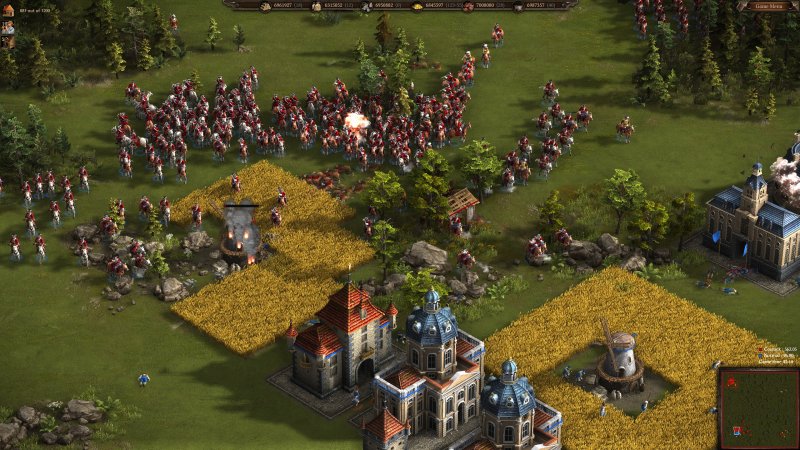 I have to say, discovering Cossacks was like rewinding time back to childhood. Here's a game that has all the trimming a grown boy needs: A bunch of colorful and historically accurate powers of the gunpowder-era Europe, just before all those pesky 1848 revolutions. A sense of romance and violence blended nicely together. Ore mining, farming, OCD hoarding. Cannon, ships, muskets! Even drums to keep them marching infantry all in pace like.

Towers with cannon, an academy where you can research 200+ technologies, drills to improve the skill and firepower of your units, and massive chess piece battles the likes of which you've read in the novels and seen on stylish oil canvas in museums worldwide. Fancy hats, bayonets, twin-tail coats, golly.

I have to admit, I was hooked.

If you've played other RTS - especially AoE - then the game dynamics will be instantly familiar. You need to build a bunch of buildings, focused around basic economy, military and technological advancement. Some of the buildings will only be available after you've built the first set and researched a handful of crafts. For instance, the 18th century barracks, which produce more advanced units, will not be available until you've progressed to the 18th century in your town hall.

But there's more, including a few interesting challenges. You will need a lot of peasants to support your city - and your military. There are six main resources - gold, iron, coal, wood, stone, and food. The more units you have, the higher the upkeep. But then, if you run out of resources, not only will you not be able to create any more units, you will experience civil and military unrest in your city! Without gold, your mercenaries will rebel. Without coal and iron, your units won't be able to fire their guns, and they may even mutiny against you. 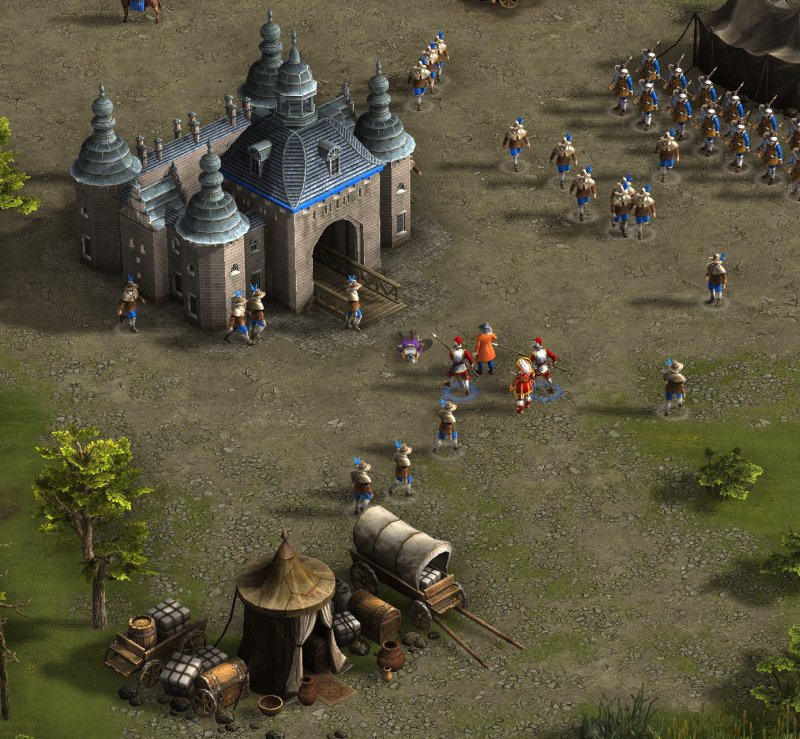 As you make progress and research new technologies, you will be able to hoard additional resources - and more quickly. For instance, the basic mine can only support five peasants. But if you advance a mine to the highest available level, you can send up to 90 peasants to work inside it. At the top of your screen, you will have a clear indicator of your resource usage, and whether you have sufficient workforce to maintain the necessary balance for all your units.

A productive city, with all the fine buildings and busy mines.

The main focus of Cossacks is battle rather than economy. You will need to build a huge amount of troops, and I mean huge, if you want to win. While a typical AoE game will feature maybe 100-200 units on both sides, in Cossacks, you can easily end up with 1,000+ soldiers and 300-400 peasants. Then, you will need to march all these troops to battle, and you will do it in a typical 17th century fashion. Regiment by regiment, moving slowly, with mutual support from cavalry and artillery.

Waterloo, I was defeated, you won the war.

The battles are brutal, fast and chaotic, just as you would expect. You won't always be able to elegantly position your units just the way you like them. Then, there are no castles - cannon tower are available primarily for defense, so you may find yourself fighting rearguard action, or trying to stop enemy's mounted raids against your city. To make things worse, the enemy troops can capture both your buildings and civilians, making these attacks extremely disruptive. 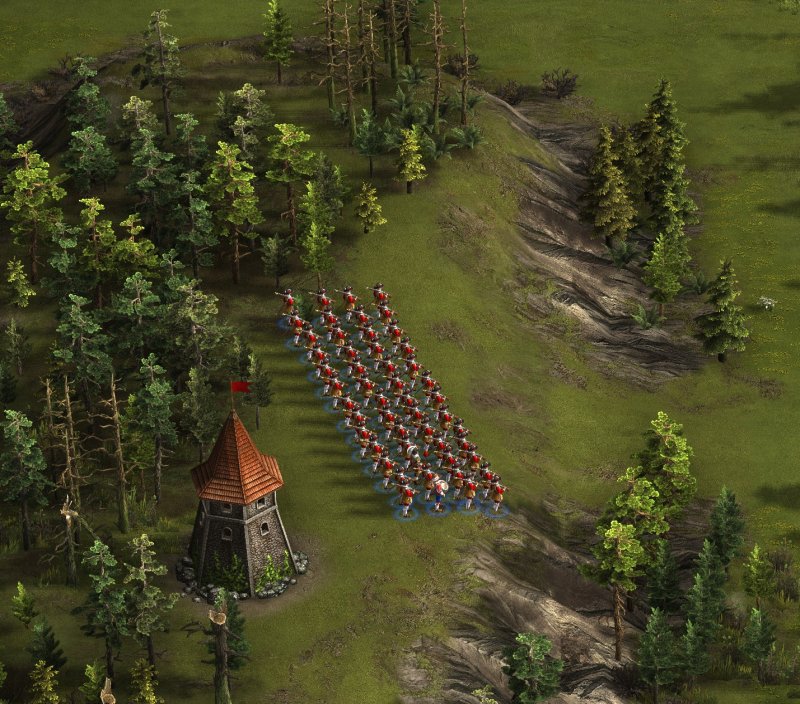 Protecting a vital passage lest any pesky enemy raiders slip by.

I tried different fighting styles, and found out that slow and steady always works best. If you have infantry units, officers and drummers can help maintain order and morale. Light cavalry is good for harassing enemy troops, while heavy shock troops (like dragoons) are best for powerful frontal attacks. Mercenary units can be a great assets, as they can be built quickly, but they cost a lot of gold, so make sure you're ready for the extra spend. If you're short on cash, and you need to go on the defensive, towers and walls can help, especially against marauders and infiltrators. 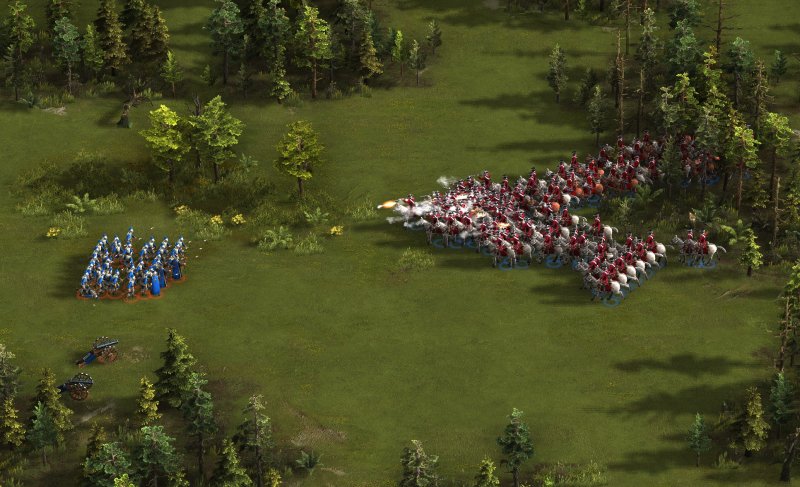 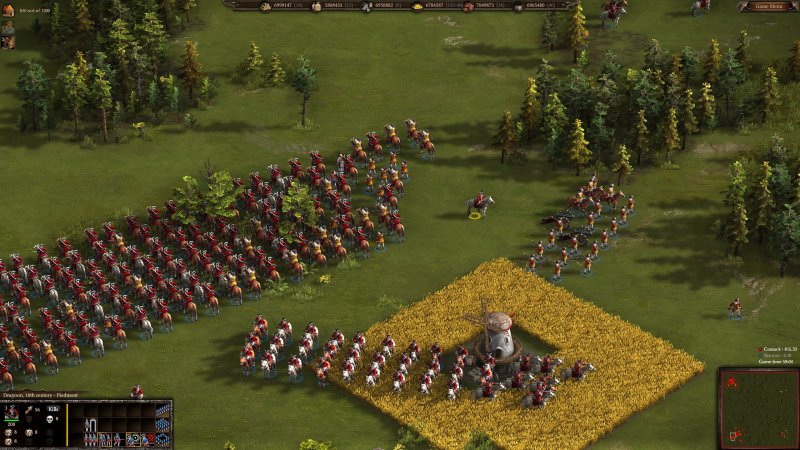 An enemy mill is in our hands!

There are lots of different nations, and a wide variety of maps, so you can practice different methods and tactics. The asymmetry of warfare adds to the elements of unpredictability and delight, although sometimes, you can find yourself overwhelmed trying to manage a few thousands troops all at once. Fog of war is another snag, but you can reveal the entire map once you research the hot air balloon (Montgolfier) in your academy.

And all shall be revealed.

For a remake, Cossacks 3 is a gluttonous game - but the same is true of AoE II: Definitive Edition, too. With roughly 1,500 units on a map, I found my RTX 2080 card happily chugging at 75%, and there was a perceptible delay in the game actions. But then, you have zoom and camera pan freedom, lovely graphics and stunning details. If you can afford the necessary hardware for the full-steam fireworks, it's worth it. 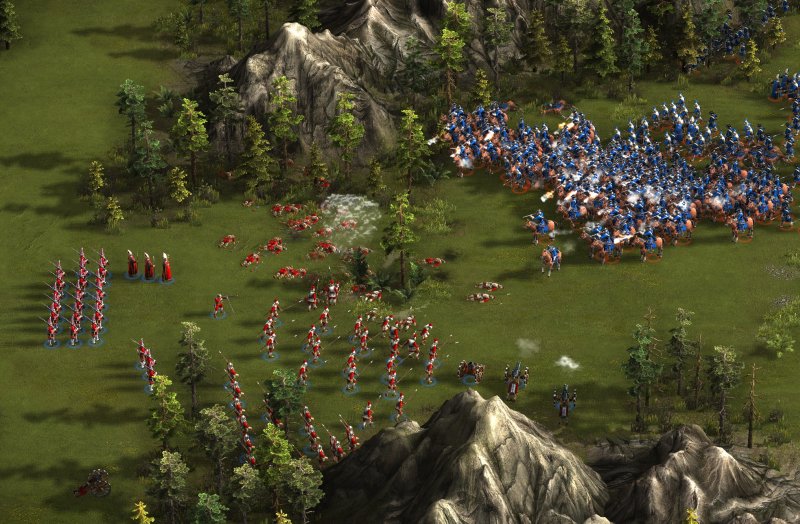 I'm not winning this battle - the GPU tells me.

I did read a little about the game - including various reviews from old-time gamers comparing the remake to the original, and pointing out various outstanding problems and bugs, which have not been resolved. I can't say anything about those, but there are a few slightly annoying elements in Cossacks. The idle peasant management thingie is the worst. Sometimes, after they're done working, the peasants will just "hide" behind buildings, and you won't really be able to see them. So you may end up building extra workers for no good reason, or sending all your idle workers to a task, even if they are half a map away.

All that said, this game is a blast!

As one gets older and wiser and accrues more experience, one finds it more difficult to discover pure, naive wonders. Which makes Cossacks an amazing and fun Santa-comes-early surprise for me. There's a great game, just like in the good old times. A delightful mix between city management, combat tactics and research, with color and splendor and real if sweet anxiety. And I'm having such a good time.

Perhaps I'm just two decades late, but here we go. Cossacks 3 is an excellent RTS title, and if you're of the old guard, and you like your games challenging and complex and full of marching little units, then it will satisfy all your needs, and then some. You get the right feel of the era, the Three Musketeers kind of thing. Ah, they don't make the games like that anymore. There you go. This is a true blast from the past, and one that deserves a jolly 9.5/10 score. The end.