Let's vote. Put on your red shoes and ... let's focus on Linux. End of the year, many a review, much experience, such wow, and similar. But it's been an interesting year indeed, with lots of great and not so great distros coming and going. However, what I find really spectacular is that nothing major happened. Ubuntu's latest LTS is probably the biggest news, and we missed such milestones as Steam Box, Mir, Wayland, Ubuntu phone, and many other cool concepts that got delayed or canceled altogether.

Still, we must select the best performer of 2014, and there's a handsome pool to choose from. Recently, we voted on the best KDE and Xfce flavors, and now we will do a more generic contest, which spans the chasm of ideology and desktop environments. Now, please, follow me.

Technically, Fedora 20 does not belong here, but it's practically a 2014 release, all considered. It's also the most sensible Fedora to date, and one I really like, especially after all the woes and troubles and pain that riddled the 18th and 19th releases.

What makes this RedHat-based distro worthy of inclusion here is a combination of factors. Decent stability, which is unexpected for a bleeding edge distro, a reasonable balance between technology and usability, and lots of hidden potential that lurks only a few mouse clicks away. True, you do need to sweat your nerd glands in order to bring Fedora to a normal usability level, but once it's there, it's really nice. So maybe for the first time ever, I have no beef with Fedora, and this is a good thing. Hopefully. It also signifies a symbolic return of this distribution into the top of the Linux game. 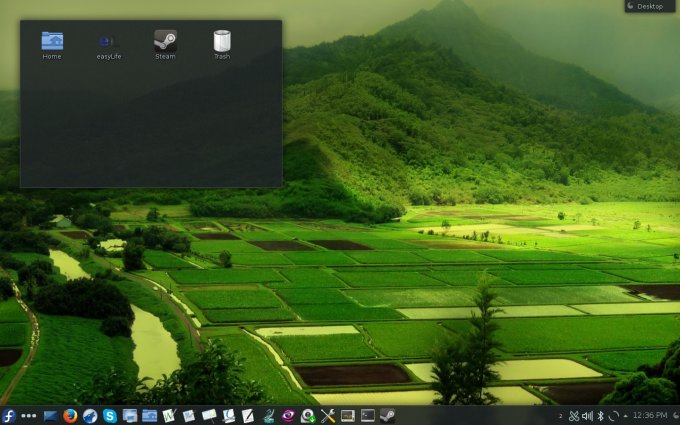 It started on the wrong foot, and then the foot got chopped off by a land mine, and then coyotes came and stole the foot before it could be stitched back on. But then, with little help from its friends, CentOS got all its glory back. Indeed, pimped up with tons of great software from external repositories, CentOS becomes a colorful, friendly desktop distribution by pure accident.

And yet, it's stable, fast and elegant, it can run all the programs you need to enjoy yourself in this modern, decadent era, and it will be supported for another century or so. Hard to beat the free price of adamant robustness combined with some nice visual and practical tricks. I have awaited the CentOS 7 release for a long time, and the waiting has not been in vain. This is a good choice for your desktop, and you might be surprised and charmed by the unexpected friendliness of the RedHat technology in your home. 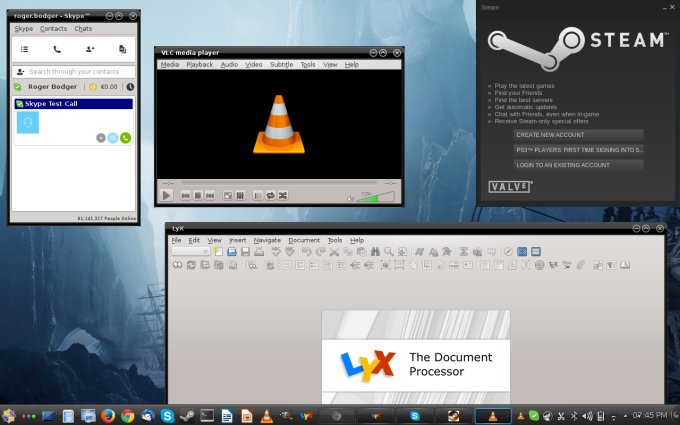 Linux Mint is the familiar high roller in the distro world. A system designed to be utterly usable out of the box, it's been delivering great results for many years now, even as its Ubuntu parent seesawed between awesomeness and despair.

For new users, especially Windows folks, Linux Mint is the quintessential bridge into the world of Linux, offering a familiar interface in the form of the Cinnamon desktop, tons of great programs and all the plugins needed to enjoy the modern marvels. It's also quite robust, well styled and packaged, and benefits from the Ubuntu legacy. On the visual side, Cinnamon is a very good looking product. All of these, forged into a series of female named releases makes Mint an easy choice for your Linux escapades.

Oh, what's that? OpenSUSE no longer sucks? Nope. And not only that, it's climbed mighty high. After a three year hiatus, and that's a good word to use, right there, openSUSE is once again an excellent choice for desktop users, combining practicality with extreme beauty and style. The issues that pestered the last three or four releases before it are gone, and you get everything you need, out of the box, without any great fussing. The comeback is so spectacular that openSUSE 13.2 recently won the best KDE distro of 2014. Yup.

Xubuntu is another winner. Release after release, it's been steadily climbing the ladder of my favor, becoming better, more refined, friendlier, easier to use, more modern, and more relevant, all in one sentence. Consistent results, combined with gradual but sane and practical improvements, pleasing aesthetics and robust community support, Xubuntu has become a top contender for the desktop. It's light and fast and stable, and it offers all the wealth of the Ubuntu ecosystem to its users. Which grants it its second place here.

This year, unlike ever before, I also asked you what you think. Your votes did not affect my own result, but it's nice to see and hear what the community thinks. After two weeks, the total number amounts to a very convenient 1900 votes. Thank you all for your participation.

In the first place, you voted Mint, with 27.5% of ballots. The second place goes to Arch, with 14.4% of votes. This is an interesting statistic, and it seems this nerdy little distro is quite popular among the users. The third place belongs to all other choices, which we will analyze soon. Skipping the free field, Ubuntu took 12.2% and elementary 11.7%. I saw there was a community effort with the last distro, but that's fine.

OpenSUSE is the fifth darling, with a solid 7.8% of votes, which more or less reflects its place in the charts. Indeed, for some of the distros, the Distrowatch hit rank is quite accurate, while others, less so. For example, Mageia and Zorin barely scored. It's funny. Because Zorin is a Ubuntu derivative, and so is elementary OS, which is still in beta, and yet, the lower ranking spin proved far more popular. Your free answers gave Manjaro, Xubuntu and Kubuntu a share of roughly 35 votes each, or about 2% total votes, which more or less reflects their rank.

This means the community vote goes to Linux Mint. In the second place, we have Arch, and the third Ubuntu. Not quite what Dedoimedo had in mind, but it's 2/3 aligned with the Distrowatch table. Now, let's see which operating system takes the first place in this annual contest.

There. Hate me if you will, but this is truly the best distribution of 2014. You may think I'm an Ubuntu fanboy, but then I gave a perfect 0/10 to Trusty's successor, the not so shiny and majestic Unicorn. The simple reality is, Trusty Thar performed like a champ in every single test I've thrown at it.

Not only is it a very fast, pretty and stable distro, it also offered a remarkable 100% hardware compatibility with all my test machines. Most notably, I set it up in a dual-boot configuration alongside Windows 8.1 on my touch-screen Asus VivoBook, which also comes with UEFI, Secure Boot and a complex vendor-imposed partition scheme. And yet, Trusty had no problems. Then, I also tried it on my Lenovo IdeaPad Y50 laptop with its UHD 4K monitor, and again, even though we were facing UEFI, Secure Boot, hard disk password, and the preinstalled setup with Windows 8.1, everything worked beautifully. 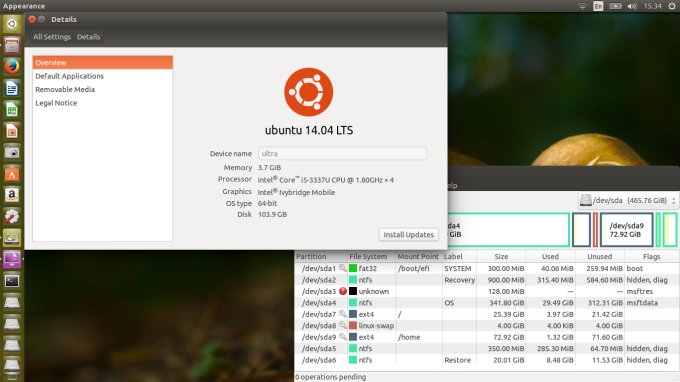 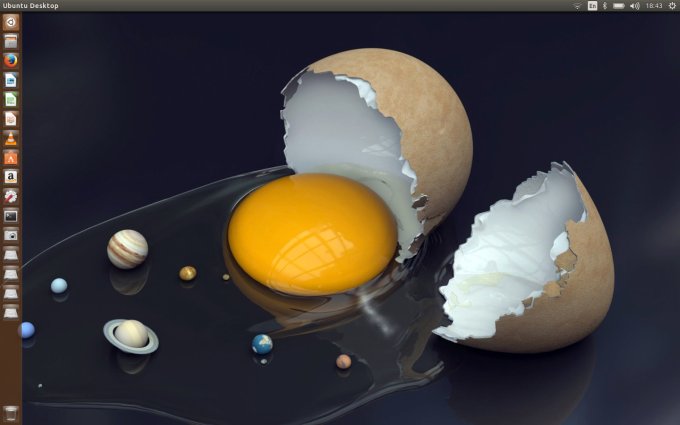 Ubuntu 14.04 Trusty Tahr is also a long-term support release, so you can enjoy its many benefits for five years. In fact, this is how software should be made. You have the familiar interface, familiar behavior, excellent stability and performance, flawless hardware detection, and tons of goodies, programs and games to keep you relevant, busy and entertained. I don't have anything bad to say, Trusty is a spotless product.

Looking back at my 2013 summary, I just realized I'm a bloody prophet. I wanted openSUSE to make a nice comeback, and it did. And I wanted Fedora to shine, and it did, and it's version 20 no less. The utter and total dominance of the Ubuntu family has been shattered, and this is a very good thing. Competition is always good.

What about Mint, you ask? Well, Linux Mint behaved splendidly, but this year, the few spins I tried weren't as sharp and spectacular as what we saw in 2013. Not necessarily a bad thing, but the best-of is more than just a list of grades. It also packs an emotional element, a surprise element, as well as the overall combination of what the selected distributions have achieved with their given parameters. For instance, CentOS is not supposed to be a desktop system, so when it does that well, it's more interesting than similar results with the stock Ubuntu family members and cousins. Hence, this list and its players.

Of course, this is entirely my private, subjective observation, but I think it fits the global shift in the Linux field. With the Mir vs Wayland game, a big delay in Ubuntu Edge, and a general cooling off in the distro space, seeing more effort from outside the Ubuntu range is only natural. And welcome. That said, the big winner is still Trusty, and it shows that even though some years may be rougher than others, Ubuntu has its merit and cannot be easily disregarded, no matter how we feel, or want to feel, even if purely on a reactionary basis. And to prove us all wrong, Canonical has baked a phenomenal LTS release, which should bring much joy and fun to Linux users worldwide for years to come. I hope you've liked this compilation. See you next year.